Madonna and the Breakfast Club (2019) 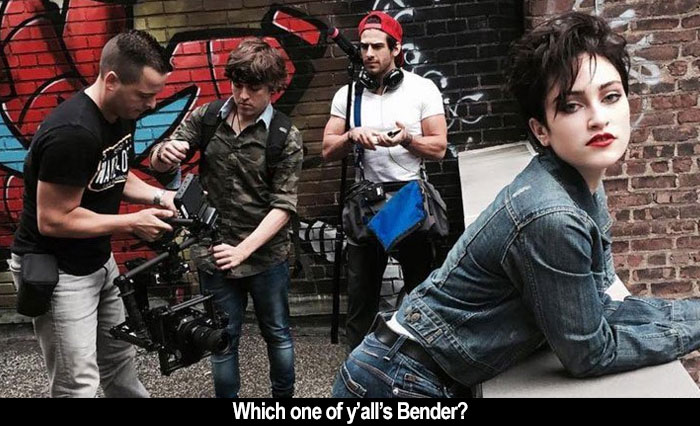 by Alice Stoehr Madonna Ciccone was born in 1958. She left Michigan for New York City in 1978. Her debut album "Madonna" saw release in 1983. After that, she rocketed to stardom. But for several years in her early twenties, she paid her dues as a musician, working menial jobs while learning drums and guitar. The semi-documentary Madonna and the Breakfast Club tells the story of that period through a bundle of techniques. The bluntest and most expedient of these is voiceover narration. When Madonna moves to then-boyfriend Dan Gilroy's home in a former synagogue, a woman's voice says, with studied neutrality, "It was here that Madonna would begin her journey into music." More versatile are the talking-head interviews with old friends like Norris Burroughs, who introduced her to Gilroy (no relation to the Nightcrawler director); Stephen Lewicki, who directed her in the no-budget movie A Certain Sacrifice; and Ed Gilroy, Dan's brother and housemate. These subjects recall those years with some nostalgia and mild disbelief over this woman they used to know. "I had a sense that she was somebody who was gonna do something in the world," says Burroughs, his stance no doubt bolstered by hindsight. The Gilroys go so far as to display photos and demo tapes from Madonna's tenure in their band, Breakfast Club. These artifacts, which include an embryonic draft of Like a Virgin's "Over and Over," sketch a portrait of the artist as a young tunesmith.

Dan Gilroy also shares excerpts of recorded conversations he had with Madonna. Nothing profound, just stray babbling between lovers. Writer-director Guy Guido disperses them throughout the film as a structuring device. Madonna and the Breakfast Club is Guido's first feature; his earlier film credits comprise work as a hairstylist and a Madonna-themed short called "Physical Attraction." His fealty to the Queen of Pop is unwavering. His bona fides as a documentarian are much iffier. The prominence he gives Gilroy's audio, for example, is disproportionate to its worth. It's admittedly intriguing to hear Madonna's actual voice, candid and unrehearsed, but the clips themselves aren't substantial enough to be load-bearing. By the same token, Guido relies far too heavily on re-enactments, which constitute about half the film. They star newcomer Jamie Auld, who pouts and bites her lip, a spitting image of young Madonna. She plays the aspiring singer as a callow dynamo--always cute, sometimes ruthless. Her scenes illustrate the anecdotes of middle-aged men like the Gilroys and bassist Gary Burke. "I wanted to be Chris Stein to her Debbie Harry," Burke sheepishly admits. "I kinda went along with it," he says of her plan to leave Breakfast Club, "because I had a stupid crush." When Guido dramatizes this juncture, though, he omits Burke's self-deprecating sense of humour. Madonna's clash with the Gilroys becomes too earnest, too flat, like an extract from a bad biopic. Worse yet is when she strikes out as a solo act and Burke pounds on her door while hollering, "This isn't over, Madonna!" against a backdrop of sombre piano. In the present, the elder Burke counsels with a chuckle, "Let it go, Gary. Let it go."

Burke and the Gilroys all speak with decades of perspective. They're still the slightest bit bitter about Madonna's ascent, but it's water under the bridge; they're too fond of her to dwell on trivial blowups. (They also clearly relish the cachet her acquaintanceship grants them. Burroughs even put out a book entitled My Madonna.) That perspective is absent from Auld's portion of the movie, which is all music-history clichés, and the two halves undercut one another's momentum. In a bold if inadvisable gambit, Guido and co-editor Bradford Coleman intersperse their new footage amid archival material. So one second it's the real Madonna, the next it's Auld in the same place and outfit. On the one hand, this emphasizes the effort that went into their facsimile; on the other, it renders that facsimile especially hollow. Re-enactment has a long history in documentary filmmaking that encompasses masterworks like Edvard Munch, The Thin Blue Line, and The Arbor. In those films, the tactic is poignant and purposeful. In Madonna and the Breakfast Club, it's stiff and colourless--at best, an act of devotion. Made with much love and little skill, the film is strongest as a repository for everything about Madonna before Madonna.