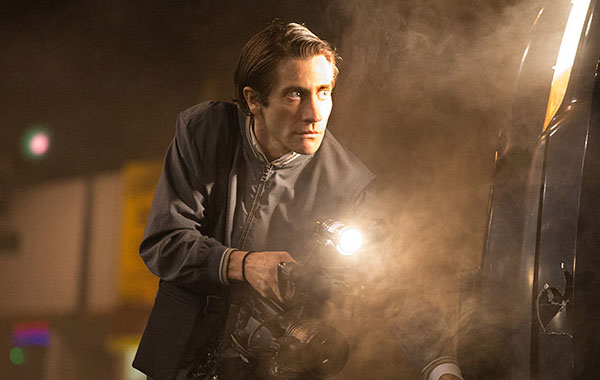 by Angelo Muredda What would we do without Jake Gyllenhaal, who's grounded every self-serious and thinly-sketched high-concept Movie About Something he's appeared in since Rendition at least? The committed star pulls off the same magic trick to even more impressive effect than usual with Nightcrawler, Dan Gilroy's directorial debut after toiling away as a screenwriter on less pedigreed fare like Real Steel and Two for the Money as well as big brother Tony's most recent Bourne franchise effort. The Nightcrawler partisans--and they'll be numerous and vocal--will likely downplay such hacky origins along with the filial leg-up that producer Tony no doubt provided. (How many first-timers get to work with DP Robert Elswit?) But why should they when Gilroy's own film is about nothing so much as the corrosive effects crony capitalism wreaks on that heretofore-unsatirized American institution (certainly not covered more intelligently and presciently by a nearly forty-year-old film whose title rhymes with get work) of headline news?

Gyllenhaal plays Lou, a Los Angeles-based petty thief and scavenger who comes upon a crew of freelance crime videographers (led by Bill Paxton, who's always chasing something) selling their grisly wares to the highest cable-news bidders. Sensing some kinship, he decides, me too. An enterprising, possibly autistic sort who brags, not inaccurately, that he is a quick learner, Lou soon trades in a stolen bike for a police scanner and a camera and is reborn as a "nightcrawler," bringing unseemly footage of a carjacking to undiscerning vampire-shift producer Nina (Rene Russo) and nearly instantly incorporating as a small business, the better to hire a dopey unpaid intern named Rick (Riz Ahmed, doing a lot with next to nothing).

It's hard to mess up the visual appeal of an L.A. noir with a pro like Elswit at the ready and an engrossing face like Gyllenhaal's--trimmed and sucked-in for the role--to pivot on, and Gilroy mostly acquits himself, only really bungling a chaotic chase scene towards the end. The text is another story. It's unclear whether Gilroy realizes it's an insult to cast his partner, Russo, as a variation on Faye Dunaway's ratings-hungry monster, but he at least has the sense to tweak the role enough to get a little sympathy out of Nina's compromised position as she becomes beholden to the increasingly unhinged, power-hungry Lou. It's too bad about her dialogue--indeed, about everyone's dialogue, which is always careful to explain the satire in terms a child could understand. Consider Paxton's very good advice early on that "if it bleeds, it leads," or Lou's rejoinder to his employee that it is not uncouth to cover the injury of a colleague who's part of the same vocational tribe: "Not anymore, Rick! We're professionals! He's a sale!" So's the movie, and if I wasn't quite buying the package, I was still enthralled by Gyllenhaal's own manic, quicksilver pitch. Programme: Special Presentations