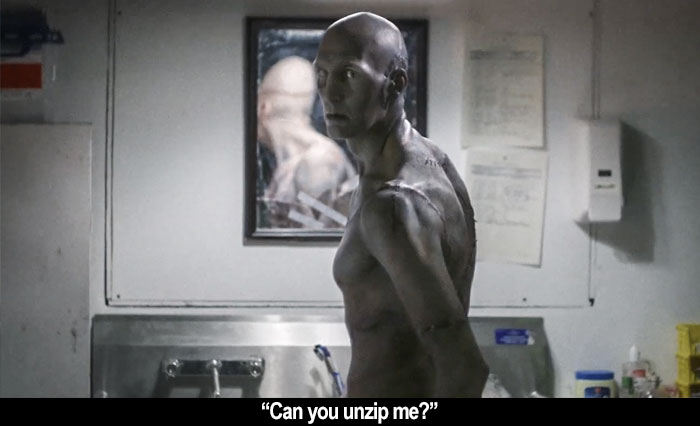 by Walter Chaw Depraved, the first film that Larry Fessenden has both written and directed since 2006's The Last Winter, is a smart, borderline scholarly take on the Frankenstein story, honouring the literary "borrowing" of the Mary Shelley novel as well as the sociological, post-WWI concerns driving the James Whale adaptation of the same. Adam (Alex Breaux), its monster, is, eventually, articulate, literate--a romantic figure in the Romanticist sense, yearning for meaning in the arms of a woman. Adam is also the walking wounded from one of our interchangeable forever wars, mirroring the walking wounded from WWI mutilated by the teeth of mechanized warfare who survived at the hands of improved medicine. There's also a subplot about a pharmaceutical industry run amok and, in the appearance of a little silver charm, a cookie for the Fessenden fetishist who might remember a similar totem from the filmmaker's masterpiece, Wendigo. There is, in other words, a lot. Enough so that Depraved spends more time digging its basement than it does wiring its house--a deficiency shared by Fessenden's first run at the Frankenstein story, his principled but didactic 1991 feature debut, No Telling.

The best moments of Depraved see Fessenden getting experimental. A late sequence where Adam goes nuts is prefaced by a beautiful, partially-animated introduction that reminds of Bernie Wrightson's ink-sketch adaptations of Frankenstein. Throughout, little green blobs appear like a biological warning light when Adam needs a hit of the red pills that give him life. Fessenden uses high-speed montages to provide exposition (pool balls/a flash of a cue/the chopping of cocaine) and images of branches as they occur in nature (rivers, trees, lightning) to mirror Adam's synapses doing their best to rewire, and the lovely closing shot pulls it all together. He's a filmmaker who aspires towards the sublime; Wendigo is the movie it is because it's told almost entirely as expressionistic poetry. But Fessenden is also a filmmaker whose intelligence sometimes gets in the way of that poetry. Depraved is tidy. I think it would have been astonishing if it were messier. The Fessenden I love and admire is a Romanticist, inspired by nature in all its unmanageable force and philosophical about how man's actions are tied to carnality. I worry that he is too concerned, at least in the case of Depraved, with dissecting his sources. I wish its title referred more to the actions of its beast than to a dry, if well-taken, shot at the greed and inhumanity driving the beast's masters.

The creator, Henry (David Call), is a battlefield medic dealing with his own raft of PTSD issues while his benefactor, Polidori (Joshua Leonard), represents the sociopathy of the very wealthy and powerful. A pair of women, Liz (Ana Kayne) and Georgina (Maria Dizzia), feel like expository crutches whose fates, at least in the case of Liz, are never much in question. I do love the brief time spent in the company of barfly Shelley (Addison Timlin), who "picks up" Adam for a lonesome conversation before making a couple of bad decisions. For Fessenden to write a character called Shelley and then make her a potential "bride" for his monster is Depraved in a nutshell: It knows how to be light and fast with this material, yet rather than push its chips to the middle of the table, it errs on the side of almost parental caution. Almost six years have passed since Fessenden's last film, the unevenly-received Beneath. In the interval, he's been a devoted and nurturing producer of independent cinema who, when we last talked, worried about how his attention on others has limited his own production. Depraved exhibits some of that rust, I think. It's workmanlike where it would have benefited from being roughshod; careful where it should be lawless; and reasonable when berserker rage seems more appropriate. The picture finally lacks confidence. It's not a bad toe back in the water, but I hope its follow-up comes soon and with a vengeance.