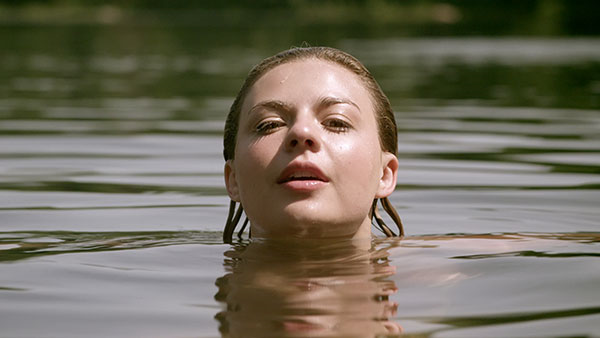 by Walter Chaw Between producing films for promising newcomers (Ti West and Jim Mickle among them), acting in movies like You're Next, and of course directing his own quartet of exceptional, loaded fright flicks (Habit, No Telling, Wendigo, The Last Winter), Larry Fessenden, quietly, surely, has become perhaps the most important independent voice in horror. He seems interested in the sociology of the genre, in how it's very much the "indicator species" in the cinematic swamp--how it, more than any other genre, has the potential to pull back the curtain. It's not just the affection for genre--and deconstruction is never the end goal--but also the understanding and reworking of the basic tenets of genre that distinguishes Fessenden's work from disrespectful "post-modern" bullshit like Cabin in the Woods. It never feels as though he's slumming (as it did when Coppola and Branagh dabbled in horror); his subtext remains subtext, his perspective is always the victim's rather than the bully's. His own take on the Spam-in-a-cabin/monster-in-the-lake concept, Beneath, showcases that intelligence, even as its energy--particularly when held against his last four films--flags through most of a soft introduction. But what it loses there it makes up for in spades in a piece that ultimately feels a great deal in mood and tone like Stephen King's short story "The Raft." For a child of the Eighties who devoured King's Skeleton Crew upon publication, there can be no higher praise.

The plot is the standard one with kids out for an end-of-school romp at a remote lake hidden in a dark wood. What intrigues about Beneath is its absolute dedication to rounding out its characters by loading them down with frailty and ambiguity. Before the pals get on the water, Johnny (Daniel Zovatto), the first person we want to like, has a conversation with his lost love, Kitty (Bonnie Dennison), that ends with Kitty's admonition, "We're never free from what people think, you know that." Johnny's trying to win her back from jock Matt (Chris Conroy); the necklace he tries to give her in this scene seems to be the physical manifestation of that desperation, but Fessenden subverts that gift into something more sinister later. When the monster from the deep announces itself, Fessenden, in an elaborate crane shot, lingers on the talisman for a moment: It's a reminder that although Kitty is in obvious peril, Johnny's not doing anything about it. We come to understand that Johnny maybe had a plan for all of them by bringing them here. Beneath is loaded with ugly, black payloads: moments that speak to the unwillingness or inability to do the right thing--subverted by self-interest or perverted, as so many things at that moment in life are, by fleeting emotion.

Once stranded in the middle of the lake by a monster that steals their oars (metaphors abound), our heroes decide that the best/only way for them to make it to shore involves an audit of individual worth and potential. Film geek Zeke (Griffin Newman), the character we're conditioned to like because of his underdog status now that Johnny's proven himself grey, declares that he's the only of them who will contribute something positive to the world and thus should not be turned into monster chum. Suddenly we hate him. In truth, it's the footage he captures that becomes the instrument of truth-telling in the end, so is it that we hate his arrogance, or that he's right?

Beneath plays with identification, and challenges the audience to manage its expectations. When the victims reveal the extent to which they'll compromise their humanity for the sake of survival, it becomes a bleak allegory for how self-interest in a closed community is a deadly strategy. Fessenden even introduces an element of sexual violence into the proceedings (much as King does in his short story). Every atrocity in the film is a character moment. Beneath's weakness, ironically, is that efficiency. This genre is so hoary that its pleasures are restricted almost entirely to unpacking its underneath. The picture's only existentially scary and it's indeed pleasurably nihilistic, yet it feels more like an exercise than his other films have. It's a monster movie that's good for you. I would have liked if he'd left a little fat and gristle on the meat. 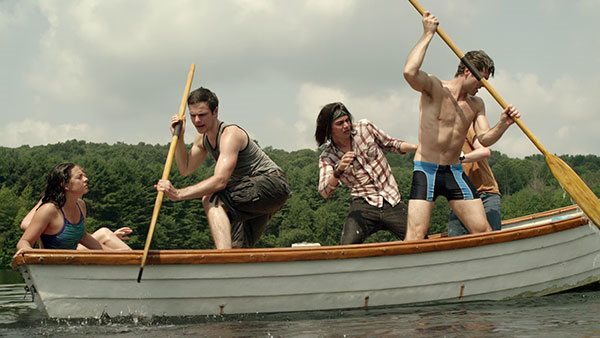 THE BLU-RAY DISC
Scream Factory brings Beneath, Fessenden's first all-digital production, to Blu-ray in a gleaming 1.78:1, 1080p presentation that is largely free of noise except when it's calculated to appear, as in the shifts to the POV of Zeke's camera, during which the image takes on an almost 16mm coarseness. The colours pop--the blood is deep red, though can I just say I think there's maybe a missed opportunity with the first victim not surviving the initial attack and waking up in the middle of her sacrifice? Anyhoo, a consistently fine transfer aided, no doubt, by an absence of CGI to gum up the works. Yep, the creature's a practical effect. Hail Fessenden. The attendant 5.1 DTS-HD MA track is likewise state-of-the-art and makes good use of the discrete soundstage. Doesn't hurt that water gives me the heebie jeebies to begin with, so the constant sloshing from all corners of the room got under my skin.

"A Look Behind Beneath" (56 mins., HD) is an unstructured, understated, unnarrated (for the most part) behind-the-scenes doc encompassing creature development, the audition process, and a read-through, during which Fessenden demonstrates a smooth, steady touch at the tiller. He answers some concerns about credibility without showing his hand. We get to see the building of the floating platform where crew perched during the shoot and, moreover, to witness the ingenuity required to pull off a project like this with limited resources. Fessenden additionally records with sound designer Graham Reznick a feature-length yakker wherein he demonstrates an appreciation for his antecedents. You can guess from his films, but it's clear that he knows--and is respectful of--the movies that came before. It's a nice, technical session from both parties, talking about lighting and miking challenges and celebrating moments where everything came together. The purposefulness of the piece emerges, too: Fessenden speaks of Beneath as "heightened" and "allegorical," which it is, certainly, although I do wonder if that sort of design didn't ultimately stifle most any feeling of freshness. There's good discussion of working in elements, with using the sun as a key light and creating multiple boats to facilitate shot/reverse shot set-ups.

"Outtakes" (15 mins., HD) features some, but not enough, shots of the monster foundering, Bruce-like. What's interesting about this extra is that it hardly has any scenes of the young cast screwing around or flubbing lines--it literally consists of slates, actors waiting for their cues, retakes, and extended takes. Just as the film buggers expectations, so too does its outtakes reel. A "Poster/Premiere" (2 mins., HD) shows the work that goes into designing a one-sheet, which, probably not all that interesting to most, is super-interesting to collectors like me. Shots of the poster rolling out are intercut with footage from the premiere. "What the Zeke" (18 mins., HD) reveals the secret footage referenced in the film. It looks a lot like an acting workshop never meant to fit into the movie proper. "What's in Black Lake" (11 mins., HD) is a found-footage thing with Fessenden that also functions as lore for the film, while "Fessenden on Jaws" (17 mins., HD) transitions from an old Fessenden short with TV movie critics attacking a "Jaws remake" into a visit to Fessenden's basement, where a replica of Quint's vessel the "Orca" is discovered. I'd give a pretty penny for it, truth be told--it's awesome. I love that Fessenden says that one of the best things about Jaws was the yellow barrels. They really were. When he begins playing all three male roles as he fusses about his model, it's kind of a joy to watch. 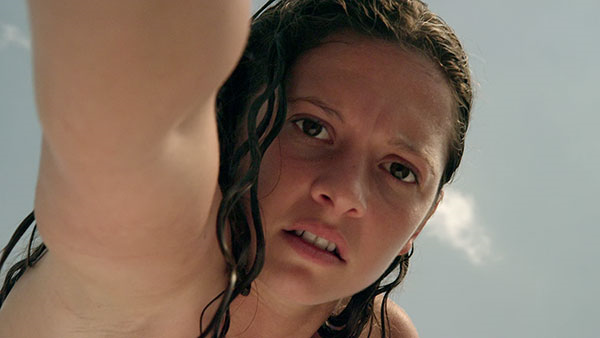