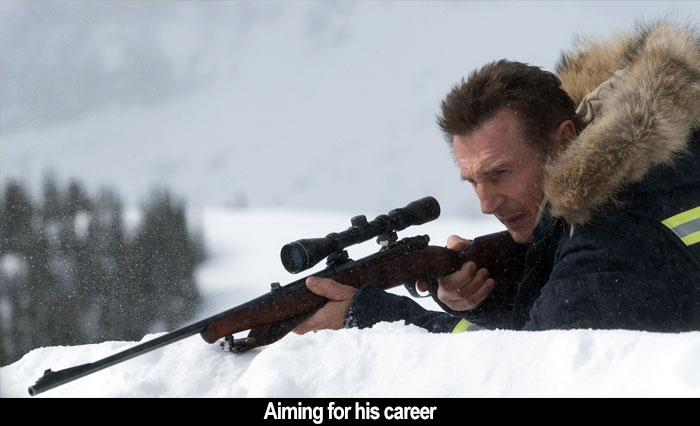 by Walter Chaw Cold Pursuit features the umpteenth iteration of Liam Neeson's angry white-vengeance avatar and its familiarity drags down Hans Petter Moland's English-language remake of his own In Order of Disappearance, as does the baggage Neeson's carrying around after revealing on the film's press junket that he once stalked the streets of Belfast, hoping a black man would start a fight with him so he could bludgeon him to death. When a white man "confesses" to being racist without initiating a conversation about his path to understanding the innate bias that would have him instantly equate the deeds of one black man with the character of all black men--not to mention instantly turn a woman's victimization and tragedy into a story of his own crisis and redemption--what he's actually doing is providing a racist/sexist dog whistle for thousands of similarly-blinkered white men to say "but for the grace of God" and, "who among us?" Except I've never thought the actions of one minority spoke to the worth, for good or ill, of an entire race. Not even when it seems like every mass shooting in the United States--and there's a new one every couple of days--is carried off by a mediocre white man who's usually angry with women for somehow identifying that he's not worth shit. I have certainly briefly fantasized about killing specific individuals for wrongs done to me or my family, but I have also never carried a weapon to their door in hopes they'd open it. I want to think I represent the majority. When the hordes sharpen their pitchforks in defense of poor Liam Neeson, though, it's cause to wonder.

Interviewed by VARIETY at the Berlin Film Festival, where his new film (not Cold Pursuit) is premiering, director Moland, after offering a broad, white-person's defense of Neeson's statements (including the "thought police" gaslighting tactic that should really be retired by now), switched to bemoaning how this conversation is "taking [his] voice away" and how Cold Pursuit should be talked about as a fun film about the futility of revenge. Except that it isn't, and neither was In Order of Disappearance--a movie that so inspired a conversation about the futility of revenge, you've probably never even heard of it. I like Moland a lot; Zero Kelvin and Aberdeen, his first two collaborations with Stellan Skarsgård, are immense and not at all like what one would suspect from a former car-commercial director in the Ridley Scott mold. Alas, In Order of Disappearance is exactly what you'd expect. What both films, the original and this remake, represent are these meticulously-crafted murder films by the man Terrence Malick once handpicked to take over for him on a production (The Beautiful Country). Transplanting the action from Moland's native Norway to my native Colorado, Cold Pursuit finds taciturn snowplow driver Nels Coxman (Neeson) going on a rampage upon discovering his son has been murdered and annihilating the entire criminal enterprise of drug lord Viking (Tom Bateman). Along the way, a small interest of Native Americans... Look: it doesn't matter. Just like it doesn't matter that this fictional town of Kehoe, Colorado looks for all the world like a town in British Columbia, nestled in the Canadian Rockies. There's an intrepid cop (Emmy Rossum) who starts to figure out what's going on, but that doesn't matter, either.

Cold Pursuit is funny in a gallows way when Moland inserts title cards with the names of fresh victims, and during multiple scenes in which Coxman punctuates moments of dark mirth with sudden eruptions of bloody violence. It's also amusing the way Viking loses his shit about everything, in one moment punching a giant exercise ball as he stalks through his mansion, in another trying to threaten his Native American soon-to-be-ex-wife and getting his balls squeezed as a deserved consequence. The picture's not funny, however, when you consider that Neeson, being who Neeson is even before he revealed his tone-deafness, is never believable as a quiet nebbish whom vengeance reforges into a badass killer, and it instantly kills any surprise along with any pathos potential to the piece. When it's Skarsgård, you buy the hangdog. With Neeson, he's always just one affront away from killing everybody. Laura Dern plays Grace, Coxman's estranged wife, with an icy fury that would have better served--and been better served by--the leading role. Imagine the film where Dern plows snow and harvests bad guys while her worthless husband, Coxman, falls into a flat-earther YouTube rabbit hole populated by men who don't see anything aberrant about wanting to murder a stranger of a specific race. It'd be a big improvement. As it is, Cold Pursuit is a gorgeous travelogue of British Columbia in the winter featuring Neeson doing his surprise-revenge-murder character. Mileage, as they say, will vary.