Fantastic Fest '14: In Order of Disappearance 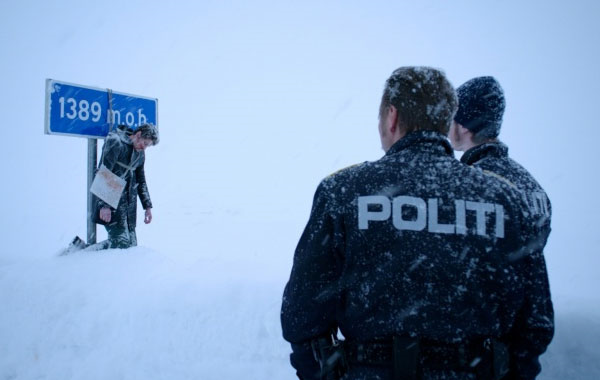 by Walter Chaw I've been a fan of Hans Petter Moland since his ferocious Zero Kelvin, starring a relatively unknown Stellan Skarsgård as a psychotic trapper alone with two other men in the wintry Norwegian wilderness. A wildly-successful commercial director, Moland's work is more contemplative than you might expect, considering. He was hand-picked by Terrence Malick, to give you an idea of his style, to take over The Beautiful Country for him when the director was called to another project (The New World). Moland returns to the frigid Norwegian winter with In Order of Disappearance, which opens with a man shaving, cutting a square swath through the foam on his face. Cut to the man on a giant snowplow, describing the same shape through a blanket of white. It's a beautiful moment. Moland's films are full of them.

The man is Nils (Skarsgård), a pillar of his community, a civil servant held in high regard, and his son, one night, is abducted and murdered by some very bad men. Nils's wife leaves him in the cold wake of it. He saws off his hunting rifle and decides to take matters into his own hands. The bad men are led by neurotic Greven (Pål Sverre Hagen), balancing an embittered ex-wife and a criminal empire with a combination of bad temper and impetuous actions. Thinking initially that the offenses are being carried out by rival Serbian gangster Papa (Bruno Ganz), Greven responds to Nils's attacks on minor henchmen with a preponderance of force, starting a gang war that lands Nils conspicuously in the middle.

There's undeniable pleasure in watching Skarsgård as a wronged man, and there's a comfort between him and Moland, paired here for the third time (my favourite is their middle collaboration, Aberdeen), that shows. The picture has a certain The Limey vibe to it, a sense that In Order of Disappearance will be meticulously structured, if free for the most part--at least until its rimshot of a final shot--of much in the way of fireworks. It's interested in Nils's slow burn into action and in Greven's hair-trigger childish response to it. Both actors are tremendous. Skarsgård is the Netherlands' answer to Brendan Gleeson--there's an entire subgenre now of movies that could only star one of them. Moland uses title cards to mark the "order of disappearance" of characters as they're killed, a gimmick that sort of works by creating comic interludes as a counterpoint to the violence.

If only Skarsgård had been given a wider arc to describe, like the alcoholic father taking a journey with his estranged daughter in Aberdeen, or the repressed brute of Zero Kelvin. In Order of Disappearance is basically a straight line for Nils: Once he steps into the role of man-of-action, there aren't many places for him to take his character. The rest of the picture, then, is just a series of set-ups and pay-offs; it's fun, for what it's worth, but it ultimately doesn't fulfill the promise of its first, poetic sequence, nor does it honour the pain of the loss of a child with anything like the kind of complexity of which Skarsgård and Moland are equally capable. It's a film made with real craft that isn't at all memorable. I'm not sorry I saw it, but I'm already in the process of forgetting it.