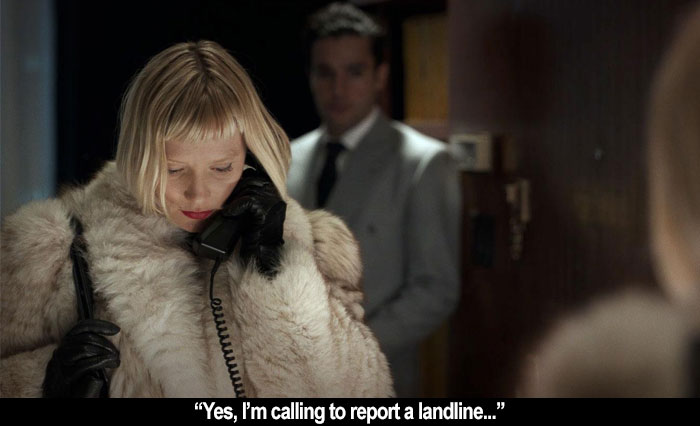 by Walter Chaw Opening with a vintage "Feature Presentation" bumper and sporting a couple of lengthy, giallo-inspired transitions scored by vintage needle-drops (Goblin's Tenebrae theme pops up at one point), Nicolas Pesce's Piercing is hamstrung by a peculiar lack of energy and the casting of Mia Wasikowska, who can be very good in a particular type of role (Damsel, Stoker) but is just as often miscast (Alice in Wonderland, Crimson Peak). Piercing wants to be a psychosexual pas de deux between broken people looking to quiet some demons and ends up holding no real surprises over too long a period. It does begin well, as schlubby Reed (Christopher Abbot) thinks about shoving a knitting needle into his baby, who later tells him, in a surprising baritone, to kill a hooker. If only the picture had carried through on that promise to be arthouse Larry Cohen rather than listless De Palma. Alas, once Reed packs his bags for a business trip, makes notes on how he's going to do the deed, and solicits high-priced escort Jackie (Wasikowska), it's clear that Piercing is going to be lugubrious at best and declining at worst. It's a tease. High-minded, arch, and, fatally, superior to the material.

Wasikowska lacks the commitment to play a high-priced call girl. Compare her to Kathleen Turner in Crimes of Passion, another arthouse thriller shot in lurid hues that calls back to Italian slashers. She's in it for the psychological complexity of Jackie that would lead her to this profession, not the gonzo recklessness and appetite for destruction that would make her this fantasy of high-dollar prostitution. Her Jackie is an actor's exercise; there's not a moment I believed her in the role. Anyway, Reed hires Jackie, Jackie shows up, Reed asks if he can tie her up, and Jackie's good with that. Before he does, she kind of masturbates, causing Reed to laugh uncomfortably. This triggers Jackie, for some reason, sending her into the bathroom to self-mutilate. For Jackie to be unprepared for discomfort in her line of work feels tossed-off, facile. It just moves the plot along to a more comfortable place for Wasikowska. Reed takes Jackie to the hospital and then back to her place, where she cooks him dinner. The plot goes where you think it will, given that it's based on a Ryû Murakami novel (and indeed, Piercing is somewhere between Audition and Tokyo Decadence), but it shies away from the extremes of those works. I haven't read Piercing, but I'd be surprised if it were as scattershot and polite as this.

The tables are turned on the businessman seeking to exploit a young woman, and Piercing ends on a sly freeze-frame, which is, essentially, the best criticism of the film there could be. It wants to tell you how smart it is, and I worry it's not as smart as it thinks it is. Jackie is one sick twist--we know this because she pierces her own (body double's) nipple. She likes canned soup if she can doctor it, and she mostly wants to cuddle, I guess. She finds Reed's plans, and that gives her...does it give her ideas? I don't think that rings true to how she's presented. It certainly gives us permission to enjoy Reed's suffering, except we already enjoy his suffering because he's such a nebbish. The talking-baby intrigue is replaced by marital intrigue, and then there's all that style: the saturated colours, the split-screens, the long tracking shots. It's a beautiful-looking film, no question, carried off with a high degree of technical skill and care. If only the script were as polished, its actors as committed to making us truly uncomfortable about the sexual politics of movies like this. Something like Audition, as it happens.