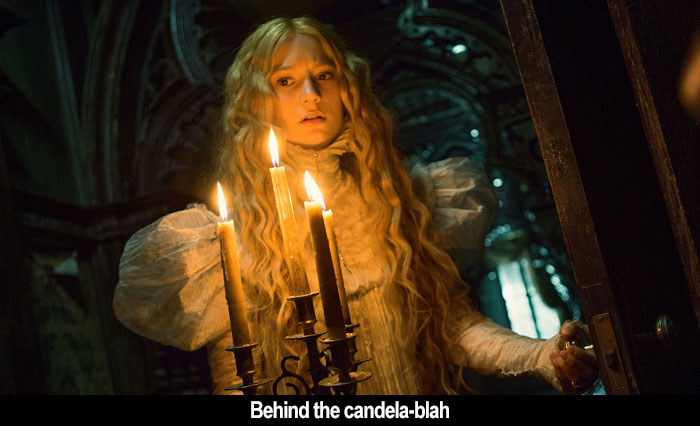 by Walter Chaw I love Guillermo del Toro. I love the ethic driving Cronos and The Devil's Backbone and the Frankenstein and Pinocchio myths driving Mimic. I love the Prodigal Son of Blade II, the ferocity, of course, and vision of Pan's Labyrinth, and all of Hellboy II: The Golden Army, my favourite of his films; every frame is wonder. I didn't like Pacific Rim but I did think it was at least all-in and there's something to be said for that. And now here's Crimson Peak, which is just, you know, really bad and for no one. I have a friend who referred to del Toro's book version of The Strain (I've never read it) as arrogant. I didn't understand that, but it tickled during Pacific Rim and has found full flower now in Crimson Peak. There's a point at which someone who is an expert in something can go from teacher to pedant. What begins as a conversation, nurturing and full of joy, becomes patronizing and solipsistic. I myself probably crossed over years ago. Now I have company. Del Toro at his best shares what he loves. At his worst (and Crimson Peak is del Toro at his worst, by a long shot), he believes that he's talking over your head. You couldn't possibly understand. You'll never catch all his references, he says. And suddenly the party's over and he's all by himself in his self-aggrandizing echo chamber of curiosities.

Lucille (Jessica Chastain) is the cold, piano-playing spinster sister of Baronet Thomas Sharpe (Tom Hiddleston), in the United States to try to convince gruff industrialist Carter Cushing (Jim Beaver) to finance his mining machine. Things don't go well. Thomas turns his attention to wooing pale, not very interesting, fledgling writer Edith (Mia Wasikowska), and when tragedy strikes, the siblings and Edith retire to the titular manse that's slowly sinking into a quagmire of scarlet clay. Del Toro's film is uncertain, something you couldn't say about any of his previous films--acting very much like the product of a fledgling filmmaker afraid he won't get another chance to do everything he wants. Given del Toro's recent string of tragedies (leaving The Hobbit, losing At the Mountains of Madness), its performance anxiety makes some sense. Crimson Peak acts like the best-funded debut feature in history. For the first time in del Toro's career, he's unsure of himself. The movie brings John Boorman's Excalibur to mind. It's possible, too, in other words, that this film represents so much to him, is so much the reflection of his tastes and fascinations, that everything got jumbled on the way out. It's a mess. A catastrophic one.

Lucille is fed bitter tea, grows ill, has nightmares about the ghost of her mother warning her against going to a place called "Crimson Peak," and discovers that her dashing lover and his odd sister are perhaps not everything they're cracked up to be. It doesn't help that the ghosts look lousy and that the film isn't scary, ever. Nor that Wasikowska gives her very worst performance in scenarios that play out like old SCTV sketches making sport of ridiculous bodice-rippers like this. I can't tell if she was coached to act this way, but look at the scene where she's swallowed by a giant wingback chair, consumed by hysterical sobbing. It's community-theatre stuff, and del Toro is worried about staging it so that the camera is at the exact place Hitch put it for Alicia, Sebastian, and his mother in Notorious. Worst is that Crimson Peak is in actuality one of those stuffy period pieces interrupted by a few moments of unpleasant, not-at-all innovative gore, plus one truly unsexy sex scene (how much better would it have been had del Toro intercut it with the scene where Edith jiggles a key in the lock of a steamer case?), thus rendering it insufferable for one audience, then insufferable for the other.

You could possibly begin by talking about how del Toro was hard at work for a while with Larry Fessenden, writing an English-language remake of The Orphanage that Fessenden wanted to be grounded in a parent's grief and del Toro wanted to be a lush, gothic, haunted-house epic in the Hammer mold. It can't be an accident that Crimson Peak is suffused in blue and red filters like William Castle's 13 Ghosts: del Toro is one step removed from handing out "Illusion-O" viewers so that people can choose not to look at his bright red phantoms. The Orphanage project faltered at least in part because of that fundamental difference in what Fessenden thought was scary (the loss of a child) and what del Toro thought was scary (a disintegrating castle on a lonesome moor and the thing that walks alone!). Left to his own devices and the endless resources of being an A-list director who, if he's not careful, will develop a Terry Gilliam-ish reputation for mismanagement and squandering opportunities, del Toro has crafted the world's noisiest bad adaptation of Wilkie Collins.

Were that it actually an adaptation of The Woman in White rather than this thing that steals a few of that novel's key elements (the woman in white fresh from Bedlam, the sibling intrigue, the tension around a signature, the ratiocination)--rather than this thing that has its dashing detective-cum-Harker character, Alan McMichael (Charlie Hunnam; nope, still don't get it), be a fan of Arthur Conan Doyle. A red herring, hardy har har. But one so obscure that it can only really be funny to del Toro. It's arrogant. And it's not funny. In another life, del Toro wrote a Spanish-language study of Alfred Hitchcock. I've wanted to read it for a long time. With Crimson Peak, he soullessly "borrows" the central relational moments from Notorious: the poisoned tea, the looming chairs, the threatening relative, an extended gag with a key from a key chain that goes missing only to reappear at the most inopportune moment. It's so blunt it's impossible to call the picture anything other than a rip-off. It's painful to write that. It's even more painful to watch. Del Toro also rips off Rebecca's central tension between Joan Fontaine's hapless newlywed and the demonic housekeeper Mrs. Danvers, played here by an icy Chastain who doesn't seem like she's having much fun with it. There's a scene where Chastain and Wasikowska admire the portrait of the dead lady of the house together. It's played broadly, for laughs it doesn't get. I imagine del Toro shaking his head and wondering if anyone will get it.

There are other bald allusions in Crimson Peak. There's a little bit of The Innocents, of Andre de Toth's House of Wax, of John Fowles's (more than William Wyler's) The Collector, and a lot--a lot a lot a lot--of Lewis Allen's great The Uninvited (to which del Toro has already paid homage in a film he produced, Mama). Del Toro egregiously pillages the Changeling grave (Medak's, not Eastwood's), but listlessly, with a red rubber ball and a cobwebby wheelchair.* The real pity is that there's neither grace nor real meaning in all the signs and landmarks. He's like the ADD kid showing off his collection. (It's interesting that so much of his recent press has been structured around visits to his elaborately-decorated work space. Telling, too.) That it's badly miscast--why have Wasikowska and Chastain swap accents? Why Hunnam, ever?--is icing on the cake. The film is technically sure, yet hobbled by its pacing through a monotonous first hour and a not-quite-campy-enough second. It's a mistake to rely on CGI ghosts and to show them so frankly and for so long. In the end, there's no role for them to play, either, save as roadside attractions along the way. I was surprised at the end to see the great Matthew Robbins, screenwriter of Dragonslayer and one of the many script doctors on Close Encounters of the Third Kind (i.e., good movies), credited as a co-writer on this. The fear for the fan is that Crimson Peak flops and del Toro doesn't get to make Hellboy III. The greater fear should probably be that it doesn't flop.

*You know, for Crimson Peak not being a horror movie, as del Toro--perhaps in damage-control mode--has taken pains to point out on Twitter, it sure tries out a lot of jump scares and looming shadows.