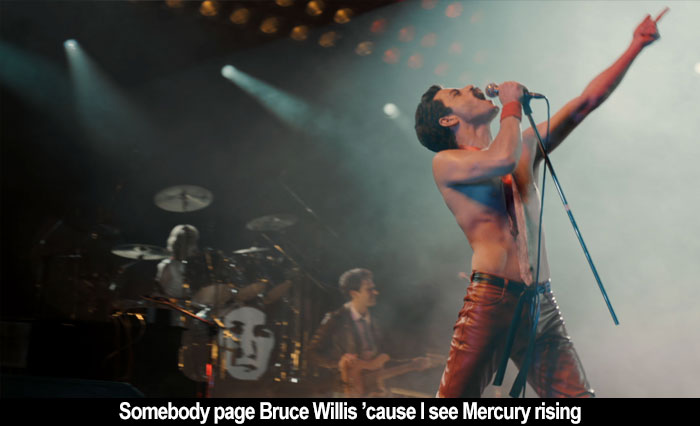 by Walter Chaw There's a real tragedy behind Bohemian Rhapsody, Bryan Singer's formula biopic of Freddie Mercury (Rami Malek) and Queen, and it's not Mercury's rise and fall and rise and fall and posthumous rise. No, it's that a life lived as rebuke to boxed-in functionality is now boxed into a functional, easy-to-parse package. Not the first person to say it but the only good version of this movie is Walk Hard, and there's never been a bad version of this movie, not really. It's oatmeal. It's always okay. I genuinely love Singer's X-Men films. Superman Returns is a masterpiece. There was a time when the idea of Singer doing this would've promised a keen, incisive coming-out melodrama, but even that's been neutered by Singer's defensive posturing against real-life, possibly criminal ugliness and its looming threat of legal repercussions. His well-publicized dismissal from the project in its eleventh hour is the most Mercury moment of the whole thing and it happened behind the scenes. When the most interesting scene in Bohemian Rhapsody is a contentious press conference where Mercury's sexuality is attacked as the movie warps and stutters around him, you get the sense of the On The Waterfront apologia that almost was rather than the sop to popular taste this is.

For the rest of it, it's Freddie joining the other members of his band, making it big, succumbing to hedonism and the lure of power and riches, and then at the end discovering that nothing can fill the gap left in his heart by the people he's left behind. Among them are Mary (Lucy Boynton, who needs a better agent and quickly), the sweetheart Freddie marries before he comes out, along with his traditional parents (Ace Bhatti, Maneka Das), who sternly disapprove of this rock-and-roll lifestyle. People don't appreciate Freddie's genius until they do, and stuff like stamping feet and playing the piano upside-down in bed leads to moments where Queen fans can identify where the gold and platinum records came from. But Bohemian Rhapsody isn't interested in either how artists create or sexuality and identity; it's barely interested in anything except recreating a few lively concert scenes that frankly should've been allowed to play out from start to finish. At least the picture ends with the entire Live Aid performance. Too bad that by then it serves as a milestone in Mercury's absolution rather than as a document of his wild freefall. Give it to Malek that he's suitably saintlike for this, the singer's canonization and hagiography.

The right approach to this movie is probably something stylized, alive, maybe something like Walter Hill's Streets of Fire. Instead, Bohemian Rhapsody is polite to the point of quailing, a deeply inoffensive and bland film about the life of one of the most wilfully offensive and interesting figures in the rock pantheon. Malek is fantastic, working in a fully-fleshed performance around his fright teeth and a script so redacted by surviving Queen members that it could slot right in next to the wholly sanitized Ray and the almost-as-clean Walk the Line. Bad boys documented in movies you could take your parents to--which is, of course, likely the opposite of what any of them would've wanted. The greatest offense is its treatment of Mercury's last love, Jim (Aaron McCusker), who has almost no dialogue and makes little impact beyond being the one Freddie takes home to meet his parents. He's a tool for Freddie's redemption, the vehicle through which everyone else in Freddie's life can prove they're not homophobic enough to show it in the moment, and not inconsequentially that goes for Bohemian Rhapsody's intended middlebrow audience as well. The tastefulness of this Freddie Mercury biopic is loathsome. Or it would be if anything in the film really mattered.