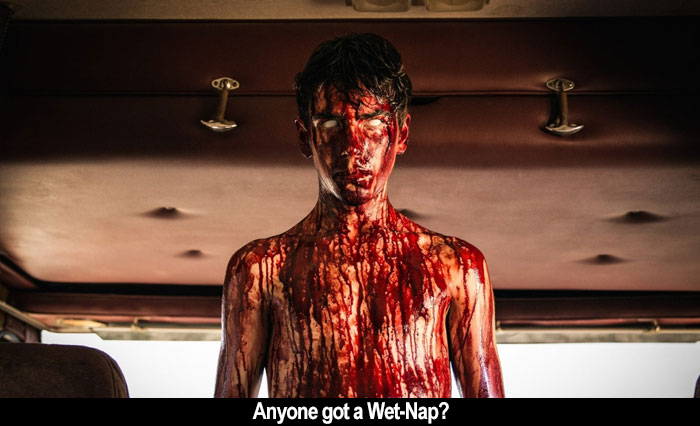 Watch The Toybox on iTunes

by Walter Chaw Triple-threat Scott Martin's Big Kill--he's the writer/director/co-star of the film--is an old-timey western for people who think Silverado is an old-timey western. Really what it resembles is a distended episode of "Alias Smith & Jones", where a pair of raffish, well-meaning ne'er-do-wells spend time in various clichés interacting with a stock company of NPCs that populate movies like this. The film opens with irrepressible Travis (Clint Hummel) fucking the daughter of snarling Mexican generalissimo Morales (Danny Trejo, who survives this one), thus inaugurating a boring gunfight between the Mexican army and Travis and his partner, Jake (Martin). Jake wants to know what's taken Travis so long. Travis wants Jake to know that it's not "screwing," it's "making love." It's that kind of movie. They're chased across the Texas border so that Michael Paré can make a cameo, and then on to the titular town of "Big Kill," where cityfolk greenhorn Jim (Christoph Sanders) wants to make a new life now that his wife was lost to him in childbirth. When Jim shares that with his buttermilk-scrubbed girlfriend, it sounds an awful lot like his wife was a fetus, but, you know, there you have it.

Once there, Travis and Jake lose at cards, piss off a bartender, get intimidated by a bad preacher (Jason Patric) and his outlaw muscle Johnny Kane (Lou Diamond Phillips), and fall in love, Jake with a whore with a heart of gold (Audrey Walters), Travis with a whore without a heart of gold (the hint is that she's named "Felicia Stiletto" (Stephanie Beran)), and Jim with the shopkeeper's daughter, Josie (Elizabeth McLaughlin). As for the rest: the dialogue's not fantastic and in great quantities, while the direction's straightforward and the sets are surprisingly handsome and turned-out. There's money in Big Kill, no question, just not much of a reason for being. There's also not enough intrigue or kinetic energy to distract from its essential emptiness, making it a specific type of dtv slog that's gotten theatrical distribution somehow. It's not a great thing when the inevitable final gunfight resolves with the baddie and the milquetoast running around each other in circles, Naked Gun-style; or that loverboy Travis puts one between Felicia Stiletto's eyes after she inexplicably does the vampy-trampy two-step with some knives. Played for cool and, when that fails, played for laughs, Big Kill is desperate to find a reason to exist beyond playing expensive dress-up and make-believe.

Marginally better is Tom Nagel's The Toybox, which, while also not really being about anything, at least sports the high-concept hook of "haunted RV" to ease the slow accretion of minutes. Here Jennifer (Denise Richards) and her layabout brother Jay (Brian Nagel), nebbish husband Steve (screenwriter Jeff Denton), doddering dad Charles (Greg Violand), and hyper-irritating daughter Olivia (Malika Michelle) set off on a road trip from hell (aren't they all) to see cave paintings or some shit in the desert. First, though, they stop to help stranded brother and sister Mark (Matt Mercer) and Samantha (Mischa Barton), the latter of whom provides the film a bitchy, psychic commentator. There's not much set-up, not much explanation for the tensions apparent from day one, and then once the bad stuff starts to happen, it's not entirely clear why Samantha is so instantly a pill. There are also these dead spots where people say things like "you make a good point" as verbal rimshots to other people's jokes that are just not funny. I say this but it's sort of funny when something is this not-funny. Also funny is the way The Toybox shoehorns in a few dad-in-a-chimney Gremlins monologues for bizarrely-pitched pathos.

I will say, however, that I was well and truly in its corner as Richards monotoned that "everyone in this camper is going to die." It doesn't necessarily forgive that even in a camper these idiots keep finding ways to get separated, but, look, at least it has the conviction to be Christine, only with a vehicle big enough to fit a large family and some strangers inside. My real objection to films like Big Kill and The Toybox is that they don't feel like dream projects to me so much as programmers--cynical ones that, having identified the skeleton of some genre formulas, seek to cash in or, failing that, to serve as calling cards for future cashing-in. It's pursuit of loyal genre audiences without commensurate respect for those audiences--the Hereditary or 28 Days Later... kind of thing where the creators do their best to discredit the films as somehow less for their exploitation roots. That said, The Toybox is a lot funnier than it has any right to be (I love a moment after someone is shot in the head and someone else says, "...He's not moving..."), and it's diverting to imagine that Richards's pretend trauma echoes her real-life trauma of having been married to Charlie Sheen for a while. I mean, give it that.