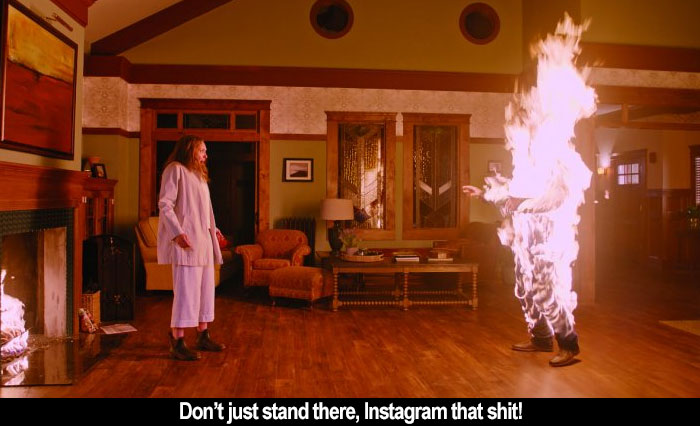 by Walter Chaw There's a feeling nagging at the back of my head that writer-director Ari Aster doesn't have another round in his chamber--that Hereditary, his feature-length debut, is a canny Frankenstein's monster of great horror moments sewn together expertly onto the trunk of Ordinary People. What I'm saying is that it literalizes the familial demons of Ordinary People, and in so doing diminishes them. It's a cheap, mean cop-out. It's an altogether ignoble thing for supernatural horror to be the literal, not metaphorical, explanation for familial dysfunction. There's a definite lack of ownership involved here, and the tremendous cast is thus betrayed by the film in which they find themselves. Reckless, feckless, the very definition of nihilistic, Hereditary is a marvellous technical achievement that feels too much like a calling card and too little like the cri de cœur I think it'd like you to believe it is. Even in the middle of its harrowing ending (and it is harrowing, don't get me wrong), there was a moment I stepped out of the film for a second to admire how "clean" it felt: a movie about the worst things you can ever imagine that I'd feel pretty good recommending to people. I was reminded of an interview with the late Jonathan Demme conducted around the time of The Silence of the Lambs where he talks about finding the line beyond which you'd lose the audience for being too frank in your depiction of atrocity. Hereditary is calculated in the same way. It's the movie about the unspeakable that everyone can agree on; the Matterhorn ride at Disneyland, renamed "My Mother Never Loved Me." It's a fun ride, but it leaves a weird aftertaste. In many ways, Hereditary is the quintessential horror film of the Trump administration.

Annie's (Toni Collette) mother has just died after a long illness. She lived with Annie's family for a spell before meeting a lingering end in hospice. We know some of these details because Annie is an artist who makes intricate, autobiographical dioramas. She has a show coming up in a few weeks. As the film opens, it zooms into the room of one of her scale models à la Lars Von Trier or, you know, Tim Burton. Hereditary is very aware of its architecture, its spaces and anti-spaces. That kind of awareness is most often associated with Roman Polanski, and the comparisons to Polanski's Rosemary's Baby are cogent and appropriate even when they're made by Aster. Rosemary's Baby, though, deals with the consequences of Rosemary's passivity, whereas Hereditary is just sort of a dick. Still, both are films that deal with a woman betrayed by her family and those who would be her friends; both are invested in the idea that children can be monstrous and unwanted but also treasured somehow--adored. Aster takes pains to show things happening outside windows, in the fore- and backgrounds, in the far left and far right of the frame. Like Polanski, he works in three dimensions. Aster treats his environments with the meticulous, staged precision of Annie's dioramas. It can be fun to tick the Chekhov's guns going off like dominoes in the third act. At least it would be fun, if it didn't feel like Aster was playing at Chekhov.

When it's good, Hereditary is only as good as a fleet survey exercise by a filmmaker who's already declared his discomfort with horror. When it's bad, Hereditary feels like the wrong kind of exploitation flick, one that doesn't inhabit its traumas deeply and so believes a character as beautifully performed as Annie's deserves to be the butt of a cosmic joke. Take a hint from the model of the house in the foyer, the way the film opens like Lars Von Trier's Dogville; the picture announces early and often that Aster is in control here and don't you forget it. When he reveals in interviews that he meticulously sketched out each shot in advance, it lands as something at once admirable and smothering. I think Hereditary is the reason Stephen King didn't like Stanley Kubrick's adaptation of The Shining. Hereditary is always only a formal exercise for Aster, even if it's a painful domestic drama for Collette and Byrne. There's a smug quality to it of just another wunderkind lighting a Zippo in the jungle for the awed appreciation of the yokels interested in horror movies. Aster's a talented technician looking to score.

Find another clue in Annie's children: one, Charlie (Milly Shapiro), is tipped by the trailers as the prototypical weird kid in horror movies like this, while the other, Peter (Alex Wolff), is a refugee from teen movies. They're well-played but difficult to place, emotionally or biologically, as the offspring of Annie and Steve (Gabriel Byrne). Charlie's "evil" before becoming a product of two worn prejudices: the child who draws twisted shit in horror movies; and the girl whose lack of affect and unusual appearance point the way to freakishness. I felt bad falling for it, but Aster lets me off the hook. Ditto Peter, a burner with a hopeless crush on a classmate whose pot-fuelled paranoia turns out to actually be less unreasonable than the reality of the situation. You feel bad for him, not because he's betrayed in the film--he's not written well enough to be betrayed--but because the film itself has betrayed him. Hereditary, see, doesn't care about its characters--it cares that you care about them, so when it smashes them arbitrarily with what feels like the whole of the modern horror canon, you feel sick. Yet there's morality in playing with stereotypes this way and then confirming them. I would have appreciated being set up to loathe Charlie because of her obvious difference only to find that I was programmed to react in a bad way towards disability--or in a disdainful, impatient way, towards Annie's mental health and inability to grieve, or in a frustrated, condescending way towards Steve's non-masculine-coded reactions to his family falling apart. Alas, I'm rewarded for all of my bad programming, because Hereditary confirms that I may not in fact be nihilistic enough about other people. Two separate times, someone asks in what language a mysterious incantation has been written. It's very funny because it's an Evil Dead joke about suburban idiots reading damned texts out loud for some reason. Then you consider that there are Evil Dead jokes in this Ordinary People remake. Jesus, what an asshole.

Hereditary sets up endless fascinations with its broken-family reserve that it will not honour. In a support group, Annie lists the reasons for her being there and it's one of the best moments in any film from 2018. None of it matters, however, because in the last fifteen minutes, it's revealed that there are a lot of well-educated, older white people intent on bringing a literal manifestation of Milton's Mammon into the world, the better to worship and be rewarded with unimaginable riches. Taken as a metaphor for the United States in the thralls of a pathetic, despotic moron, it's not bad, though the implications of extending that metaphor to Aster and the reasons for the film's creation itself are, you know, uncomfortable. In that way, Hereditary is as of this moment as Get Out. It is, in fact, much like Get Out would have been had it been made by another white Sundance brat graduating from fruitlessly mean-spirited shorts into the rarefied heights of a fruitlessly mean-spirited feature. All of which to say that I enjoyed Hereditary in the way that I can enjoy stuff like What Have You Done to Solange? or Last House on the Left: ugly, frequently exploitative pictures with withering worldviews that make you feel shitty about everything. What use is Annie's struggle to express herself through art, to do the right things for her children, to work through her grief after her mother's passing when she worries that she's not grieving correctly or enough? What use is all that humanity in Hereditary when the punchline is that it doesn't matter, nothing matters, since whatever you do in your life, you're just meat and labour to feed the appetites of the 1%? It doesn't even matter that the closing scene becomes an expository recap for the rest of the film that effectively removes agency from "evil" Charlie (thus delegitimizing its own conclusion), and feels for all the world like Aster trying to reel it back in because he'd written himself into a corner. None of it matters. It's the Job story and the reason why I hate the Job story. Your life is merely to prove someone else's point. Fuck everything. Fuck you.