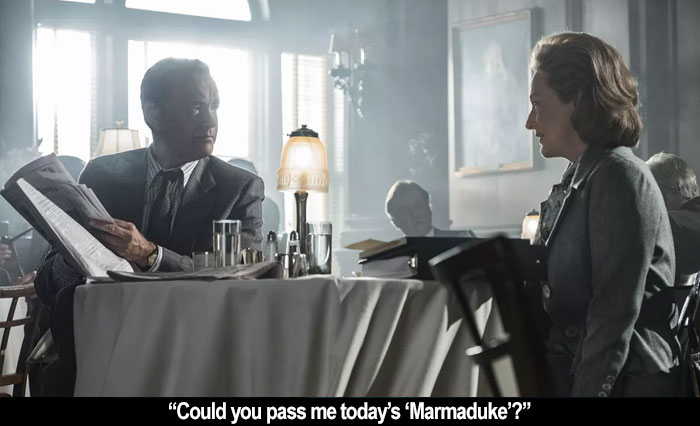 by Walter Chaw Two scenes. The first a posh dinner where Spielberg subtly changes the field of focus to show that the ostensible star of this show, WASHINGTON POST publisher Kay Graham (Meryl Streep), is listening in on a conversation recklessly shared in her presence. (It's at once a subtle presentation of gender dynamics and a master-class in visual storytelling.) The second a shot of Graham descending the steps in slow-motion to rapturous, feminine approval following a Supreme Court victory. Both are vintage Spielberg, the best technical filmmaker the medium has ever produced and a big giant, sentimental, cotton-headed ninny-muggins who can't leave the audience to its own devices and doesn't have the muscle to end things on a down note. When he manages one, his films are nigh well perfection. When he doesn't--and he hasn't, really, since Munich or maybe Catch Me If You Can--his films are 90% the best thing you've ever seen and 10% the worst. That's good enough for most. For me, it's the fantastic six-course feast that ends when you find a cockroach in the flan.

The Post is no different. It's an earnest, timely™, important™, awards-season™ prestige picture™ for the dedicatedly middlebrow who call themselves cinephiles, but likely just show up over the course of the year for this and other things people of their exact demographic will nominate for Oscars™. Spielberg is known, too, for his ability to churn out films of this exact quality and gravitas once, sometimes twice a year, which puts him now in a league in terms of productivity with Japanese master Takashi Miike. It's instructive to take a second and compare the courage and verve of a Spielberg film against a Miike joint. Imagine a Minority Report where the closing shot is a five-second reveal that Tom Cruise is merely dreaming a new baby and cabin by the river while in suspended animation. Spielberg is the only artist on the planet who thought that what Philip K. Dick needed was a happy ending. The Post is a story about a corrupt, vile POTUS trying to squash the Constitution by silencing a newspaper publishing something damaging to his White House. If you've picked up that this is a pointed broadside across the good ship Trump, nice work, you.

Spielberg muse Tom Hanks is WASHINGTON POST chief Ben Bradlee, who will always be Jason Robards to me (Robards was more Ben Bradlee than Ben Bradlee). It's 1971, and Bradlee has just been given the opportunity to publish the damning Pentagon Papers, which reveal that the White House lied to the American people about the extent and escalation of its involvement in Vietnam. Scooped by the NEW YORK TIMES, the POST scrambles its response and, at one point, Kay Graham uses her upper-crust connections to speak directly with Robert McNamara (Bruce Greenwood, who has also played JFK; if he does Bobby, it'll make for an interesting trifecta) about the ramifications of a potentially-whistleblowing response. It's not unlike Diane Feinstein deciding to publish the full transcript of the Fusion GPS testimony on Trump's Russia collusion: Timely™. Important™. As prequels to All the President's Men go, The Post makes the oft-opined point that the secret to a healthy democracy is a thriving and free press. It also makes the point that Spielberg excretes these little formless blots of nutritional mediocrity with the regularity of a prune farmer.

Defenders of the picture will talk about how good Hanks is, even though the comparison to Robards distracts entirely from his performance; how good Streep is, even though she alternates this kind of thing now with her other thing where she sings and shit; how good the supporting staff of basic-cable regulars are, and no surprise there; and especially how important this film is, without mentioning that it's also not very good. It's the cinematic version of steamed broccoli. Who can deny its benefits? But who will remember they had it an hour later? At one point Kay, surrounded by a board composed entirely of men, is shouted over, ignored, her ideas disregarded unless regurgitated by a man; it threatens to be the defining cinematic moment of a year (2017) in which men have been forced to consider their behaviour towards women. It's brilliantly played, brilliantly everything. And then there are the big speeches about the future of democracy, the slow-motion marches, the John Williams narration. Oh yes, that's right. It's a Spielberg™.