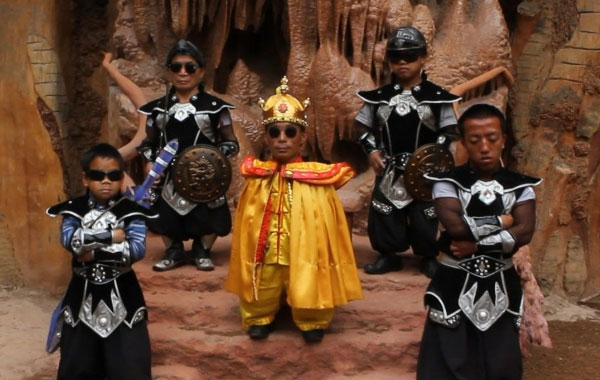 by Walter Chaw Here's the thing, and I say this after years of being tortured by Chinese people: Chinese people are pretty awful. At least culturally, it should be said, there's an extreme disconnect in terms of social mores. There's a certain directness that's difficult to assimilate as an American, along with a certain disapproval that maybe I'm just more sensitive to because of my privileged status as neither fish nor fowl. I used to say the Chinese perfected racism because they had to learn how to be racist towards people who didn't look substantially different from themselves. I became a case study in a graduate anthropology course once concerning the evolution of human sexuality. Asked about my object-choice apparatus (was I triggered more by distinct facial features than by hair colour, for instance, or body type?), I wasn't offended. It's a good question.

So Matthew Salton's documentary Dwarves Kingdom is an uncomfortable watch for me, above and beyond all the ways the film should be uncomfortable for everyone. It essays China's titular theme park/vacation destination, a Disney--well, Casa Bonita--knock-off featuring hundreds of little people "collected or adopted" by an insane entrepreneur, who forces them to wear Middle-earth garb and perform choreographed dance routines for the alleged delight of the ruling majority. Tempting to say it's something that could only exist in China, except for the way that little people are depicted in the United States. Watch Mel Stuart's frankly fucked-up Willy Wonka and the Chocolate Factory and its painted, drilled Oompa Loompas (and let's not forget the Lollipop Guild) to find there's no substantive difference; people are the same bastard all over. It's been good for me to learn, really, that the Chinese are not uniquely awful.

To his credit, Salton resists broad condemnation or opinion of the park and its residents. Performers talk about the sense of community it's fostered, the sense of belonging that many felt perhaps for the first time in their lives. (Stories from the set of The Wizard of Oz tell a similar tale.) The creator of the park insists to Salton that people who have a problem with the place obviously haven't visited. It's a The Blind Side argument: It's not so much about the execution as it is about the fact of it...and the execution. Salton interviews a dwarf child living outside the community who dreams of being 'normal' with good job prospects and the possibility of having a wife and family one day, only to wake up and find nothing changed. Then Salton follows a young little person trying to create a profession for herself by selling overpriced goods that people appear to be buying out of pity. Dwarves Kingdom is a complex piece about intolerance and the pain of difference. When a character at the end says, "I'm telling you all the things I've hidden in my heart," he encapsulates the lament of every persecuted minority. There's no hope offered in the film beyond the truism that everyone has the same dreams for themselves in this world. If that's even hope. I don't know.