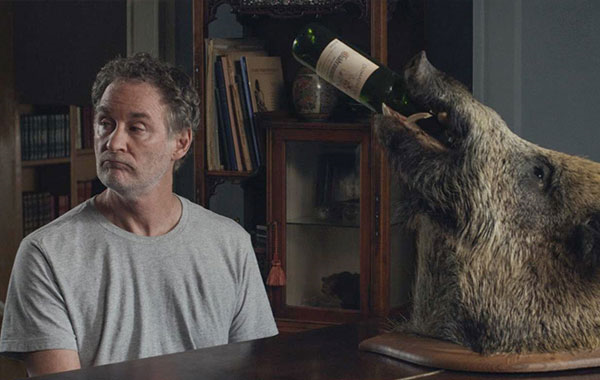 by Walter Chaw Israel Horovitz's My Old Lady, written by Israel Horovitz based on a play by Israel Horovitz, is adorable. Just adorable. Really. It's like a great, fat, French cat, or that sneezing baby panda movie, except that it stars Kevin Kline, Maggie Smith, and--I've never much liked her, I'm realizing now--Kristin Scott Thomas. Kline is destitute yankee Mathias Gold, who, upon inheriting an apartment in Paris, learns that it comes with a nonagenarian accoutrement, Mathilde Girard (Smith), who seems to have the girl-French version of Mathias's name. Isn't that precious? Because he's spent every last dime to get to Paris to sell this apartment he's not able to sell because there's this just-darling old lady squatting there, My Old Lady begins to take on a minor whiff of Arsenic and Old Lace, which is also awful--er, cuddly. Lest there be any doubt as to how sweet the whole thing is, Mark Orton's saccharine score--the only thing not by Israel Horovitz, it seems--makes sure there's absolutely no room for even a tiny, niggling one.

This being a play, however, there's lots of expository backstory leading to surprises and delightful misunderstandings, as well as dark-but-not-too-dark secrets that result in poignant shifts in character whilst leaving room for secondary characters like a realtor played by national treasure Dominique Pinon. Everything that would seem to have been intended as a twist is not a twist at all, or only a twist for the very young and the very elderly. Apropos of everything, Israel Horovitz is very elderly. The film is elderly. The play upon which the film is based by the elderly playwright is likely elderly as well. My Old Lady dodders along in its dear way, disclosing family secrets that aren't secrets to anyone who's seen a movie like this and presenting surprise affections that are a surprise to no one. Kline is really good, though, I mean it, in this movie that's so far beneath him it feels like accidentally stumbling upon Ian McKellen doing summer-stock at an amusement park. Although My Old Lady is garbage that people will patronize and excuse, if it gets Kline more roles now in the third act of his career, I'll do the same. Programme: Special Presentations