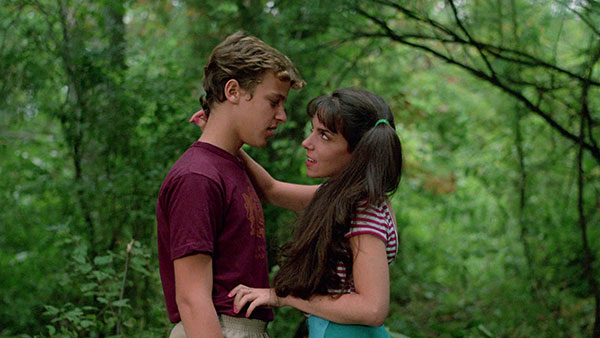 by Bryant Frazer Ah, summer camp. Softball games, capture the flag, nightswimming, and life-changing boating accidents. Not to mention killer bees, child molesters, maniacs in the shower, and one kid with a whole lot of baggage, if you know what I mean. Sleepaway Camp is a slasher movie, and it depicts lakeside Camp Arawak as a pressure-cooker of hormones and teenage flop sweat. Into this fetid milieu step Ricky and Angela, teenaged cousins united by tragedy: a boating accident that killed Angela's parents and sibling some years earlier. Ricky (Jonathan Tiersten) might be a little awkward, but he just wants to fit in; Angela (Felissa Rose), meanwhile, seems downright disturbed, spending much of her time dead silent, staring down her fellow campers with a mournful, almost accusatory glare. Before long, some of those campers start dropping dead as surely as the flies that coat the glue strips dangling in Arawak's kitchen. There's a soup incident, a shower incident, and an incident involving a toilet stall and angry bees. There's a bit of business with a curling iron that's probably inappropriate in a movie starring underage actors. The slasher's hands appear on screen, but do they belong to unhappy Angela? Overprotective Ricky? Or someone else entirely?

The most remarkable aspect of Sleepaway Camp, taken as a whole, is its verisimilitude. That may seem like a weird thing to say about a run-of-the-mill slasher movie, but what I mean is it's a real time capsule. Writer-director Robert Hiltzik is nobody's idea of a cinematic stylist. Aside from an excruciatingly mannered early scene in which Angela and Ricky's Aunt Martha (Desiree Gould) comes on like Parker Posey chewing tinfoil while scraping a knife against a glass bottle with one hand and dragging her fingernails down a chalkboard with the other, the rest of the film is pretty plain: Sleepaway Camp is shot like a 1970s TV sitcom, and as a look back at anno domini 1983, it has a documentary quality. (My favourite slice-of-life dialogue exchange goes "Eat shit and die, Ricky!"/"Eat shit and live, Bill." It feels real because it's so incredibly, insouciantly stupid, and sometimes that's how kids talk.) That's partly because the film stars actual teenagers, most of them wearing fashions that probably came right off the rack at Kmart, and not only do they make Sleepaway Camp largely unique in the annals of summer-camp horror (which normally focuses exclusively on the older, more nubile camp counsellors), they give the proceedings an almost Lord of the Flies quality that sells the concept. Outside the realm of adult supervision, why wouldn't one of these kids turn into a murderous psychopath?

As a horror pic, especially a 1980s slasher, Sleepaway Camp is pretty restrained. While there are some elaborate and reasonably sickening make-up effects, most of the violence occurs off-screen. That said, the film carries one hell of a psychosexual payload, and I hesitate to spoil it here despite that Sleepaway Camp is more than 30 years old. In short, expository flashbacks cast Angela's awkwardness in a new light even before the justly-famous closing image, one of the most baffling and incongruous climaxes in a genre known and celebrated by devotees for its WTF factor. Whatever you may think of Sleepaway Camp as it approaches its final moments, the ending is almost guaranteed to transform your reaction, for better or worse.

I won't give the whole game away, but spoilers commence here. Throughout its running time, Sleepaway Camp is seasoned with elements of homoeroticism. Some of these are only implicit; during the film's big softball-game set-piece, I was staring dumbly at the screen, trying to figure out if the guys in tight, bulging shorts and/or cut-off, midriff-baring T-shirts were being subtly coded as gay, or if those outfits were simply part of the tough-guy fashion repertoire of the time. (Certainly the movie never draws attention to them as caricatures.) In a tables-turning gesture, the picture also features a skinny-dipping scene in which a half-dozen or so boys appear bare-assed as they run down the pier towards the water while not one--not one!--of the similarly numerous girls removes even a stitch of clothing. Which is fine and perhaps refreshing, as a general matter. But, face it, in a genre flick from 1983, the lack of generic femme-focused titillation seems somehow pointed. Why, we might ask, is Sleepaway Camp working against its presumed commercial best interests? Before long, we're watching a flashback where Angela and her brother are giggling as they spy on their two daddies making out in bed, followed by a scene with the two kids sitting up, facing each other, in bed together. (It's innocent! I think!) And then the denouement doubles down on all the subtext and it's hard to tell what to make of it all.

Is Sleepaway Camp a homophobic artifact of the Reagan era? A progressive harbinger of more gay-friendly times to come? Hell if I know. On the one hand, the film absolutely demonizes a kid with deep-seated psychological problems, as though it should be obvious that sexually-confused and/or frustrated children grow up to be violent, and that's regressive--though maybe no more so than some of the film's more highly acclaimed genre stablemates, like Psycho or Dressed to Kill. Sleepaway Camp's weirdly harrowing final image (oh, it's a doozy) also exploits the audience's discomfort with deviations from ostensibly normal behaviour, especially gender roles, which, yes, can be construed as offensive on its face. On the other hand, the film is basically on the killer's side throughout--for any similarly-victimized teenager, the grisly deaths of the assembled bullies and predators must be a devoutly-wished consummation--and shows viewers how it feels for outsiders to face the straight world on an everyday basis. And what the hell are horror films for if not forcing viewers outside of their psychological comfort zones? This is not sensitivity training. Sleepaway Camp may be a crude instrument for consciousness-raising, yet it works on that level just the same--and that makes it ambitious in a way that films this artless seldom are. 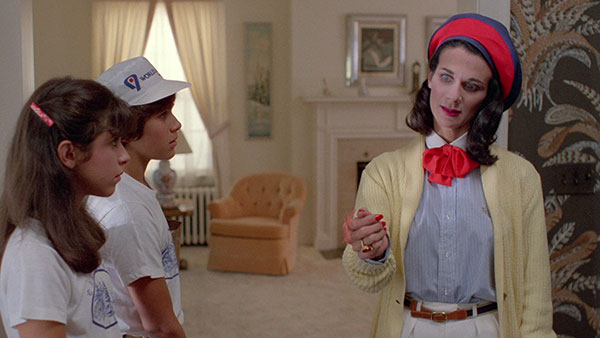 THE BLU-RAY DISC
Scream Factory went back to the original camera negative for their Blu-ray edition of Sleepaway Camp, with documentary footage of the 2K scanning process to prove it. I'm quite sure the results look better--more picture detail and colour saturation, less grain--than 35mm release prints ever did. There is no evidence of image-wrecking digital monkeyshines (grain reduction, edge enhancement), so, assuming the colours are relatively accurate, this should be about as good as Sleepaway Camp is ever going to look. That said, the grain structure occasionally gets a little blocky, which is to say artifacty, suggesting that a higher bandwidth (or, hell, a 4K scan) might have helped in a few spots, and the 1.78:1 aspect ratio is incorrect no matter how you slice it. The soundtrack is nicely preserved in 2.0 monaural DTS-HD MA, retaining plenty of detail in the mix and sporting a nice tonal balance without harshness, hiss, or noticeable distortion.

The disc contains no fewer than three audio commentaries, which is ridiculous, although the third is a port from an old DVD release and thus has archival value for upgraders. It's not like Hiltzik is generous with the anecdotes, or even a cooperative interview subject--he has a habit of declining to answer questions, as if his real motivations are either so obvious that the line of inquiry is insulting, or so obscure that providing straight answers would undermine the movie's endless complexity. Though Hiltzik plays coy, the actors tend to give up straight answers, meaning the new commentary with actors Felissa Rose and Jonathan Tiersten is actually lively and informative. Still, only the most dedicated Sleepaway Camp lovers need venture beyond the aforementioned DVD yakker, which features Hiltzik alongside Rose and Sleepawaycampmovies.com webmaster Jeff Hayes, to sample the included Hiltzik-Hayes rehash.

More worthwhile is "At the Waterfront After the Social: The Legacy of Sleepaway Camp", an engaging new 46-minute HD documentary comprising fresh on-camera interviews with Rose, Rose's mother (!), Hiltzik, Tiersten, Paul DeAngelo, Frank Saladino, Karen Fields, Desiree Gould, and practical FX guy Edward French. (Nowhere to be found, sadly, is the apparently stone-drunk college kid who makes his balls-out appearance at the picture's conclusion.) Because the film is thirty years old, there's a built-in curiosity value in seeing how its very young cast members look nowadays that lends the usual talking-heads footage added appeal, and some behind-the-scenes stills add welcome context. The subject matter is meatier than anything in the commentaries, too--brassy, ebullient Rose discusses being pigeonholed as "ethnic" and describes her stage mom's helicopter-parenting practices on set, while Hiltzik speaks relatively candidly about the exploitation imperatives that drove his creative decisions (one location, modest budget, "kick-ass ending"). Hiltzik also comes up with a decent anecdote, describing a phone call from the MPAA's ratings board: they apparently thought he was gunning for a PG rating and wanted to warn him that the film would be receiving an R. (Hiltzik had feared an X, so it was welcome news.) Rose fights back happy tears at the end of the doc, which is really sweet.

Clocking in at 15:53 is Judy, an unremarkable short film directed by Sleepawaycampmovies.com's Jeff Hayes that's here as fan service solely because a latter-day Karen Fields stars. Unfortunately, while the standard-definition video has been upscaled to HD, it has not been properly de-interlaced for Blu-ray, and Hayes himself recommends that fans watch the DVD version (bundled as part of this combo package, natch) instead. In a similar where-are-they-now vein, "The Princess" is a five-and-a-half minute Jonathan Tiersten music video shot in his native Colorado. It's assembled mainly from out-of-focus shots and obstructed-view camera angles and can be recommended warmly to all those Jonathan Tiersten superfans out there.

Oddly, the disc additionally features "Scanning Sleepaway Camp", a nine-minute short in which a camera follows Technicolor Digital Imaging Technician Ian Turpen as he creates a 2K digital transfer from Sleepaway Camp's camera negative. If you ever wanted to know what a film scanner looks like, this will be right up your alley. Unfortunately, though Turpen does sling some industry lingo (hope all you horror buffs know what "automatic D-min" is!), the short doesn't go into depth on colour-timing, dust-busting, optical process shots, or the other fine details of digital mastering--and it ignores audio completely. As an opportunity for Scream Factory to boast about going back to original elements for the new transfer, it's effective enough, and I'd like to see much more of this kind of nerdy "making the Blu" material.

Two TV spots are on board, along with a one-minute theatrical trailer. A nine-minute "Camp Arawak Scrapbook" collects behind-the-scenes snapshots of varying quality, and a few sketches by make-up artist Edward French are present alongside his scrapbooked VILLAGE VOICE obit for actor Mike Kellin, who made his final film appearance as Arawak camp owner Mel. (The VOICE article does not mention Sleepaway Camp.) Lastly, the reversible cover art allows you to shun the newly-created jacket art, should you choose, in favour of the original one-sheet's impaled-sneaker design. I sort of wish these discs included booklets with erudite critical pieces à la the Criterion Collection, but this is typically excellent work from Scream Factory. 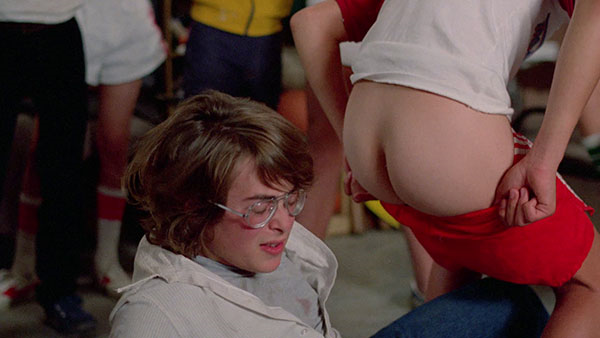