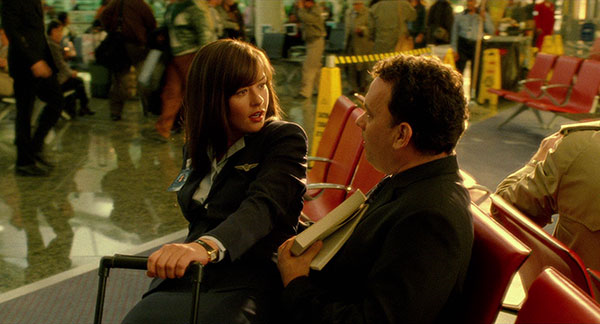 THE BLU-RAY DISC
by Bill Chambers Paramount brings The Terminal to Blu-ray in an incredibly filmlike 1.85:1, 1080p transfer. Grain is assertive but tight and consistent, while detail is glassy throughout. The only time either falters is during a digital composite--one of the more obvious ones falls at 25:39, a dolly-in on Tom Hanks through reflections from "outside"--or CG tweak. Dynamic range is remarkable, as is the attendant sense of image depth: I swear that Hanks sanding towards the camera at the 56-minute mark plays like glasses-free 3-D. Colours are often on the cusp of oversaturating (which is strange to say of something shot by Janusz Kaminski), yet refreshingly vibrant and true to the theatrical experience as I recall it. Spielberg titles always receive significant TLC on home video and this incarnation of The Terminal does not contradict that reputation. The 5.1 DTS-HD MA track showcases a subtly atmospheric if dialogue-heavy mix. John Williams's clarinet-flavoured score has a honeyed warmth to it, backed by a bouncy presence in the LFE channel.

Extras are all imported from the 2004 DVD. Except for the trailers and photo gallery, they're not given an HD bump, but they are presented in 16x9 with fairly crisp video. This wouldn't be a Spielberg release unless it were larded with Laurent Bouzereau featurettes, of course, and these begin with "Booking the Flight: The Script, the Story" (8 mins.), in which Spielberg talks about the screenplay being the last one he pulled off a weekend slush pile; coincidentally, it was a project Tom Hanks had been keeping tabs on. Both credited writers--Sacha Gervasi and Jeff Nathanson--are interviewed on set, but they don't seem to have collaborated in any traditional sense. Oddly, no one mentions the movie's inspiration, Iranian refugee Mehran Karimi Nasseri, despite Nasseri's having received a handsome payout from DreamWorks for the rights to his story.

This bonus material is at its best when covering Alex McDowell's ambitious production design, specifically the three-tier terminal (complete with working escalators) that was built inside an abandoned airport hangar large enough to hold five planes. "Waiting for the Flight: Building The Terminal" (12 mins.) is about the development of that set from concept to execution, including a scale mock-up that Spielberg took to his summer home and used to block shots with a special periscope camera. La dolce vita! The immigration processing and exterior plates nevertheless had to be photographed on location, at Montreal's Trudeau Airport, which only proved the filmmakers' wisdom in building their own terminal so they wouldn't always be at the mercy of real passengers, airline schedules, and various security measures. The three-part "Boarding: The People of The Terminal" (31 mins.) devotes segments to Hanks, Catherine Zeta-Jones, and everybody else, respectively, with Spielberg recounting his introduction to Zeta-Jones on the set of The Lost World like an enraptured schoolboy remembering the perfume of a girl he likes. Spielberg also says he's an avid television viewer (he first spotted Zeta-Jones in the made-for-TV version of Titanic), and I believe he's achieved some success in his life. Take that, anti-idiot box SALON think-piece guy!

"Take Off: Making The Terminal" (17 mins.) is a rehash/distillation of all that comes before it. A tantalizing aside suggests that the romance between Hanks's and Zeta-Jones's characters only developed during shooting as a direct result of the actors' chemistry, but Bouzereau, predictably, doesn't keep digging. "In Flight Service: The Music of The Terminal" (6 mins.) is a nice interview with John Williams, who talks about his personal connection to the picture's MacGuffin, a legendary photo of the jazz greats. Lastly, "Landing: Airport Stories" (6 mins.) asks the cast and crew for anecdotes about their own hellish experiences in air travel. Naturally, Spielberg can't think of a time he was inconvenienced by flying in luxury. In interstitial bits, the late Kumar Pallana practises his plate-spinning, and it's so damned impressive as to ultimately make this the most essential piece. A slideshow of production stills plus two trailers for The Terminal round out the platter. 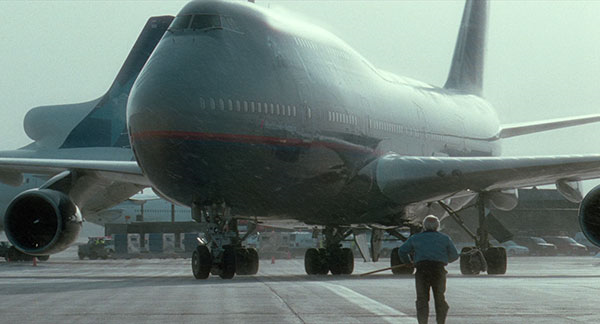