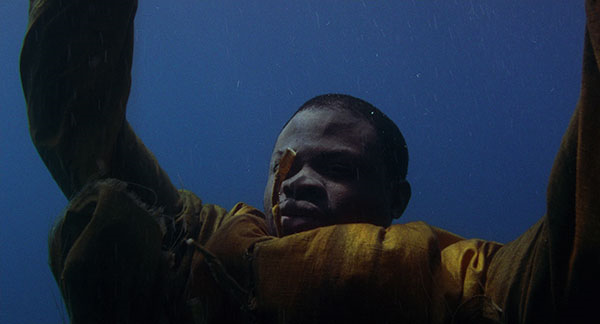 by Walter Chaw Mid-career, Sergei Eisenstein wrote a book-length study of film form. He did it with humour and a Coleridge-ian wistfulness. He writes that, once he's finished with this book, he'll try some of the things he's talking about in it. Among them is an idea that, what if instead of using montage (which he calls "vulgar"), someone were to evoke the idea of "murder" just by showing ten sequences, not otherwise linked by linear exposition, that separately evoke murder? In more ways than this, but in this particular way, Steven Spielberg is the prodigal. He evoked "war" in twenty impossibly harrowing minutes to open Saving Private Ryan; he evoked "Holocaust" in a similar stretch in the middle of Schindler's List; he evokes "slavery" in an absolutely tremendous, wordless chunk about halfway through Amistad; and he sandwiches all of it in patronizing, ham-handed treacle, massively, criminally over-scored by chief enabler/collaborator John Williams.

Spielberg goes, in other words, from artful "superimposition" (Eistenstein's word) directly into vulgar montage and exposition. He doesn't trust his obvious genius with film as a medium and thus returns pathologically to over-explanation, narration really, peanut-buttering orchestral (read: orchestrated) emotion over every crack of ambiguity and making sure, repeatedly, that an audience he must believe to be feeble has received the message. It's a tragedy, in truth. Tragic that so gifted an individual doubts his obvious gift. Though it's possible to forgive this essential failure of his post-Raiders of the Lost Ark (some would say post-Indiana Jones and the Temple of Doom) career as a flaw in his character to be pitied, what I generally feel is frustration that more of his films would be masterpieces if he just cut the shit. The first twenty minutes (and ten in between) of Amistad are what Spielberg is capable of; the other 120+ are what Spielberg chooses to do instead.

Start with the good: a wordless slave revolt aboard the titular Spanish slaver ship, led by elemental Cinque (Djimon Hounsou) in a storm at sea in the dead of night. It's bloody and kinetic, a series of superimposed images--again, superimposed in Eisenstein's use of the term: not overlapping, but in defiance of linearity--that propel the desperation and brutality of the situation and the period that housed it. Taken into custody and tried for piracy and murder, the "Amistad Africans" gain the support of abolitionists and lawyers led by freed man Theodore Joadson (Morgan Freeman), stuffy Reaction Shot (Stellan Skarsgård), and earnest do-gooder Roger Baldwin (Matthew McConaughey). Eventually, the three enlist the help of aged one-term President John Quincy Adams (Anthony Hopkins) to try their case before the Supreme Court.

All of it is set to an absolutely suffocating score by Williams. It's impossible to overstate the extent to which it destroys the picture. The music is relentless, narrating every emotion with an almost elderly attention that demonstrates not only a deep disrespect for the viewer, but also for actors who, by implication, Spielberg doesn't trust to do their jobs. Williams's theme for Adams is very much the magical/patronizing thing he drummed up for E.T. (shorthand here for noble dementia), yet the greater crime is the "African" theme, tribal drums and chants that play up Cinque's super-duper-magic-negro nobility. It's the equivalent of having a gong and bamboo flute narrate Chinese characters--the equivalent, in other words, of Short Round's theme from Temple of Doom. Williams's score is offensive because it's a carpet-bomb of saccharine, and it's offensive because it's offensive. Hounsou delivers a fine performance if you can find it under all that noise.

Consider the "miracle worker" bit, in which lawyer Baldwin does his best to communicate with Cinque. It's cutesy, the kind of thing Jim Jarmusch pulls off with irony and smarts in Ghost Dog: Way of the Samurai, falling flat here as a paternalistic burlesque. Consider too the appearance of an interpreter played by Chiwetel Ejiofor in an uncomfortable echo of his recent role as Solomon Northup in 12 Years a Slave, speaking to the essential problem in American pictures that African-Americans are generally recognized for playing servile (slave/servant), athlete, musician, or criminal--the very roles they're cast into in American society, as it happens. For every white person who doesn't see a problem with that, there's a movie like Amistad that makes no difference changing anyone's mind about anything.

The bulk of the picture is a courtroom melodrama relieved in a riveting, revelatory middle section where Cinque remembers his abduction by black slavers and harrowing trip across the ocean, all leading to his plight now at the mercy of white people and their laws. It's so powerful, so uncompromising, that it's hard to imagine a more potent depiction of the atrocity of slavery. Rape, suicide, and murder happen on a mass scale, and humiliation is portrayed in a way that's unflinching and terrible. A man is whipped to death in a deluge of blood. His eyes roll to white. A baby is killed by an adoptive mother in an act of mercy. The ship's cargo is lightened by fifty souls to save on provisions. Critics of 12 Years a Slave's alleged atrocities don't remember this sequence from Amistad. Paired with the pearl-clutching outrage surrounding the geriatric The Wolf of Wall Street, it makes me wonder how we've become a nation of Victorian gentlemen and schoolmarms. But this is a tale of two movies, and ultimately all you need to know about Spielberg is that he follows one of the most powerful and affecting sequences in his portfolio with a scene where Cinque summons some English to cry out, to a full-on John Williams-gasm, "GIVE US FREE!"

Spielberg tells the story of slavery as an economic issue, as a black-on-black issue, as the greatest shame of the founding of the United States. He tells slavery as a series of indelible images, but he also treats it like an opportunity to reassure us that we're maybe past all that, spending most of the film apologizing, retreating, softening. It's like Pasolini's Salo being broken up into thirty minutes of what it is now, and 120 of the malefactors being tried and brought to justice beneath cameo lighting and uplifting trumpet triumphals. At the end of his career, Spielberg will be known as a guy who stuck the landing a mere handful of times. He so neuters the impact of his own art that the only impression Amistad leaves one with is of Hopkins's shameless grandstanding: all smelling flowers, toddling around, and patting Cinque on the head in a way the film itself is doing for much of its runtime. Amistad is amazingly patronizing. It does no justice to its African heroes, of course, but neither does it do its audience any justice. The greatest irony of Spielberg's career as perhaps the one director most people know by name--as the great populist, as the mass entertainer--is that the majority of his films are marked by underestimating his public, and selling himself short in the process. In the end, it's his legacy that suffers and, frankly, it suffers mightily. Spielberg's films are more frustrating because there's so much brilliance in them. The parts that are good in Amistad, well, they're better than anything. And the parts that are bad are genuinely bad. Bad enough, in fact, as to almost completely obscure the good. More's the pity, because Amistad should have been important instead of a footnote. 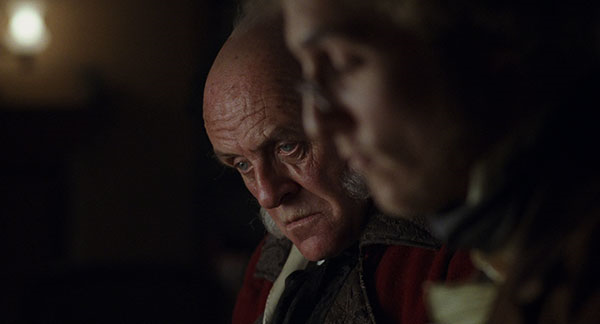 THE BLU-RAY DISC
Amistad sails home again on Blu-ray in a sharp, grain-rich 1.85:1, 1080p/AVC MPEG-4 transfer that reeks of the money and technique that went into the production. Although the colour palette is intentionally drab, this is as beautiful-looking a film as Spielberg and Janusz Kaminski, by this time his regular cinematographer, ever made together, and the shift to bright, lush hues for the Africa section is as dynamic and striking here as it was on the big screen, almost like having the lights turned on in darkness. Shadow detail is phenomenal--note especially the nighttime portion of Cinque's rebellion: the images between strobelike frames are astonishingly supple. At any rate, Spielberg knows how to shoot and the presentation is above reproach; the opening sequence, it bears repeating, is breathtaking. The 5.1 DTS-HD MA track is immersive and transparent, though the score is heavy enough that I wished there were the option to somehow isolate, and mute, it. While it never interferes with the dialogue, to the extent that it substitutes for dialogue it begins to feel redundant, like having two identical narratives overlapping each other at all times. It's instructive to look at the moments in Spielberg's films that are free of scoring: What could he do with ten minutes of quiet visual virtuosity?

"The Making of Amistad" (26 mins., SD) is a vintage EPK featuring lots of behind-the-scenes footage of Spielberg directing his actors (which he does with surprising detail and intrusion, going so far as to act out how Hopkins should walk) and producer Debbie Allen waxing rhapsodic about the fit between this story and "the man who created Schindler's List." It's an interesting connection to draw and gives Amistad a bit of extratextual flavour if we consider it as an act of a Jewish director critical of a Puritanical Christian community. This at least lends some weight to the Bible-interpretation scene, which otherwise comes off as more infantilizing and pandering. What nettles are a few interviews with extras who declare that working on the film allowed them to feel exactly how their enslaved ancestors must have felt. Whoa, there. Amistad's trailer, bumped up to HD, rounds out the spare presentation. 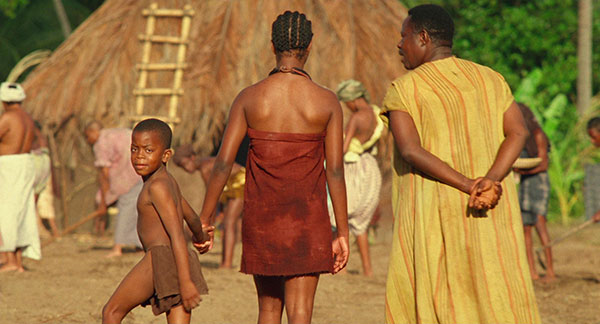