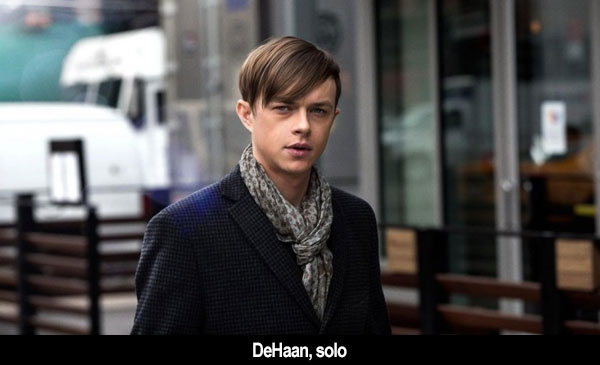 by Walter Chaw A notable improvement in almost every way on Marc Webb's first film in this reboot series, The Amazing Spider-Man 2 (hereafter Spidey 2) sports the same weaknesses, the same bloat, the same catering to the summer cult of boom-boom, but it ramps up the intelligence and a certain comfort with darkness that pays off in a pair of genuinely gratifying character resolutions. Despite what the trailers would spoil, it really only has one antagonist, Jamie Foxx's Electro--well, him, and our hero's (Andrew Garfield) struggles with trust in his relationships, whether they be with his Aunt May (Sally Field) or girlfriend Gwen (Emma Stone) or best friend Harry (Dane DeHaan) or lost father Richard (Campbell Scott). It's a film about class struggle, as May picks up double-shifts and moonlights in nursing school to provide tuition for her adopted boy (giving Sally Field the chance to resurrect her blue-collar Norma Rae), while shut-in Max (Foxx), electrical engineer at monolithic Oscorp and low man on the corporate totem pole, comes clear, fascinatingly, as a riff on the unnamed protagonist of Ralph Ellison's Invisible Man.

Spidey 2 is also, by the end, the rare film in any genre that sports a strong heroine, declaring in an obvious but bracing way that the risks she takes are hers to make--that she may in fact be the only person other than the baddie with the knowledge to affect a situation. Through it all, Peter Parker/Spider-Man emerges as the kind of hero Superman was always meant to be until Zack Snyder made him the despoiler of worlds/leveller of metropoli: the kind derided for putting on spandex to rescue kittens in trees. And while Garfield will never be the dork that Tobey Maguire is naturally, his Peter Parker earns empathy for just the number of impossible decisions he's forced to make throughout. There are obvious things that don't work about it, but Spidey 2 is rare for wanting to tackle race, gender, father issues, the shrinking middle-class, and education at all, much less in ways that offer meaning and purpose to comic books and their adaptations.

This time out, Peter's haunted by the shade of Gwen's father (Denis Leary), whose dying entreaty was that he leave Gwen alone, lest the escalation of villains around Spider-Man claim Gwen as their next casualty. A standard hero-stands-alone conceit, complete with Spidey's specific "with great power..." jazz and remembered tragedy around the death of his Uncle Ben, takes on nuance because what's at stake is a young woman's choice, hijacked (unsuccessfully, as it happens) by the two men in her life. The first time Peter tries to break up with Gwen, on the evening of their high-school graduation, Gwen resists and breaks up with him instead. She repeats it twice so we don't miss the trick. It's a little Leda and the Swan, this young woman who reclaims her victimization as power.

It's a scene that will repeat at the end when the rote hero's entreaty that the girl go somewhere safe is sabotaged by Gwen declaring her choice. Spidey 2 is so strong as comic-book fantasy because it centres itself on the weak (Gwen, Max, Harry, Peter) and paints all the rest of it as cycles of the seductiveness of wish-fulfillment, along with the limits of it. When Harry asks Spider-Man for something the hero refuses to give, there's genuine melancholy there in the realization that the things we elevate to the heroic are imperfect and subject to doubt and weakness. This is again paralleled in Peter's continuing investigation into the identity of his father--a fate that, giving nothing away, is viscerally depicted in the film's accomplished, doomed prologue. At the bottom, though, Spidey 2 is grounded by two women (Gwen and Aunt May) and their determination to forge their own paths in an unforgiving world.

Spidey 2 is elevated by a supervillain, Max/Electro, who on the occasion of his birthday finds himself forced to work late for The Man, under unsafe working conditions, and transformed into a human battery/superconductor with a grudge against the failure of an imaginary relationship. "Light confirms my reality, gives birth to my form," says the unnamed protagonist of Invisible Man as he sits in a room lit with 1,369 light bulbs, plotting to also wire his floor in a scheme to steal electricity from "Monopolated Light and Power." He listens to one record on a loop, Louis Armstrong's "What Did I Do To Be So Black and Blue," which says, "My only sin...is in my skin/What did I do...to be so black and blue"--explaining, I think, the character design for this Electro as a creature, initially and pointedly clad in a hoodie, who is all black and blue. Max refers to himself repeatedly as "invisible" and his tormentors at Oscorp do the same. Max declares at one point that what he really wants is to be "seen," and for a moment, in a delicious meta-statement in Times Square, he appears on every public viewscreen in Manhattan. The instant he turns is the instant Spider-Man's image replaces his own. More from Invisible Man:

I lunged for a yellow coin lying on the blue design of the carpet, touching it and sending a surprised shriek to join those rising around me. I tried frantically to remove my hand but could not let go. A hot, violent force tore through my body, shaking me like a wet rat. The rug was electrified.

Invited to speak, Ellison's hero is forced instead to fight for the enjoyment of his white tormentors. Above-described is how he's rewarded: with eletrical torture. As Max is transformed, he sings "Happy Birthday" to himself, and it's pathetic enough that the most intimate genre corollary I can draw is to Michelle Pfeiffer's Catwoman from Batman Returns. Both she and Electro are silenced minorities, mousy, put-upon by their superiors, and murdered for doing their demeaning jobs. Both rise as avengers with similar invitations for the world to hear them roar. ("Hell Here," indeed.) For Max, the only times he's swayed are when it's made clear that he's needed. There's pathos there, in this character, and there's a political charge, too, that's not dissimilar to Gwen's declaration of individuality. For each, the moments they weaken are the moments they admit their need. It's a connection that Gwen herself comments on to Peter in a throwaway bit in a maintenance closet: "That's kind of what it's like to be loved by you," she says, referencing Max's apparent death by electrocution and subsequent silencing.

Sadly, there's much about Spidey 2 that doesn't work. The forced lightness. Garfield as a Byronic loner. A bit of Raimi-esque slapstick in the back of an armoured car driven by a hulked-out Paul Giamatti, cameo-ing as The Rhino in the same way that John Ratzenberger cameo'd as the Underminer at the end of The Incredibles. All of it feels out of place in a movie that wants to be something else. I have the same complaint about Captain America: The Winter Soldier: There are genuinely good films in here, but they're beholden to a larger storyline and a pre-existing, ongoing mythology. Screened in IMAX 3D, the film is brighter than expected, and its action sequences are surprisingly not awful, although it's greatly ironic that this commodification of geek subculture presumes that the hunger for these pictures is rooted in the action (the stomping ground of the macho ruling culture, after all) and not the yearning and disappointment of their imperfect, sometimes alien, always mutated heroes. It helps that Webb is careful to demonstrate Spidey's concern for the citizens of his city--and telling that this concern creates two of his chief adversaries. And late in the game, there's an unexpected resolution to a small action, as a little kid, inspired by Spidey's kindness, steps briefly into the hero role. It's a reminder that the root of this stuff is overcoming the fear attendant to the loss of childhood.

The romance sequences are atrociously-written and redeemed only by the potent chemistry of real-life couple Garfield and Stone; and the film's tacking-on of a corporate baddie is identical to the same bad thinking that grafted Robert Redford onto Captain America: The Winter Soldier. Yet Spidey 2 has a core of ambition, even brilliance, and makes a genuine attempt not just at transcending the expectations of its masters, but also real relevance. Find it in the film's women characters and their struggle for individuation, in its uncompromising beginning and bleak ending, and in a black anti-hero modelled after one of the foundational works of the Civil Rights movement. I know--I was surprised, too.

Yeah, I don't always see eye to eye with Walter, but whenever he gives something unexpected a positive review, I stand up and take notice.

As far as blasting the macho-ization of geek culture goes, I appreciate the sentiment, but have you taken a look at geek culture on the Internet? Most of them seem to want that. Poll them on who made the best Superman or X-Men movie in recent years, and Bryan Singer will be in the minority, for those very reasons. So it goes.