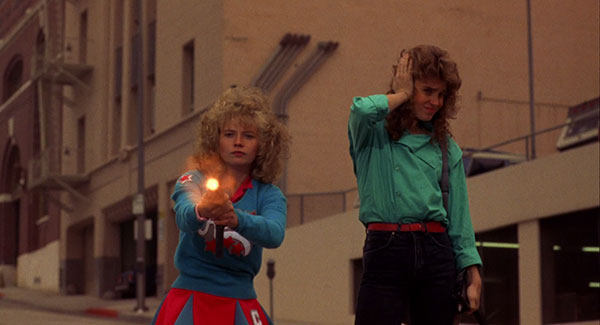 by Walter Chaw SPOILER WARNING IN EFFECT. There's a quote from the seventh season of "The Simpsons" that applies to the problem before us where Bart, happening on a "Schoolhouse Rock" thing and learning from Lisa that it's one of "those campy '70s throwbacks that appeals to Generation X-ers," says, "We need another Vietnam to thin out their ranks a little." If there were, and if it had, we might've avoided the current rage for hipsterism--if the Joss Whedons of the world (and David Cranes and so forth) had found themselves casualties in some hostile jungle setting, then would this current youth generation have adopted, ironically, that last generation, and would people like me at my tender age of 40 be fuelling demand for hale distribution/archival companies like Shout! to produce exhaustively-supplemented HiDef releases of garbage like Thom Eberhardt's excruciating Night of the Comet? Look, I'm not immune--I wrote an entire monograph (200+ pages, no kidding) on Steve De Jarnatt's Miracle Mile that, in my defense, was more memoir than anything else (or is that more disclaimer than defense?). Still, I'll proclaim to my grave that Miracle Mile has substance, while Night of the Comet has none. The first and greatest danger of nostalgia is that having grown up with certain artifacts, we treat them like family and tend to love them unconditionally, as family does. This affection doesn't mean that junior isn't a grinning idiot, however, because at least in this instance, he is. And I'm a strong believer that if one of your family members is a grinning idiot, it's actually your job not to inflict him or her on other people.

Slot this one next to stuff like Night of the Creeps as crap that is fondly remembered and best left at that. In Night of the Comet, the conceit is that Earth passes through the tail of the titular comet or somefuck, thus killing everyone on the planet with the exception of anyone who happened at that moment to be surrounded by steel. Arbitrary, and it doesn't ever get less arbitrary, as when I say that it kills everyone not ensconced in steel, what I mean is that it kills most everyone except for the ones it leaves behind as zombies or soon-to-be zombies. Ascribing value, perhaps Night of the Comet deserves points for being the first to plant a flag in the "fast zombie" phenomenon that would propagate in the early part of the new millennium. No, better to write that one off as Eberhardt's unfamiliarity with or disregard of zombie lore, tossed on a pyre with wit and pace to appease the great god "high concept." See, Night of the Comet is legendary for being that movie where the end of the world comes and all that remains are a couple of dingbat Valley Girls who take the sudden emptying out of their city as a great opportunity to do some "Girls Just Want to Have Fun"-scored shopping. It's tempting to call out that this is the rare film with girls as unapologetic action heroes, except there's also a guy-survivor who ends up rescuing them, and in a deflating epilogue, our heroines are provided with domestic fates there in the post-apocalypse. It's a whole new spin on the phrase "nuclear family" and proof positive that hyphenate Eberhardt is neither artist nor philosopher nor great friend to women. Eberhardt is a less prolific Lloyd Kaufman, and it's an utter mystery to me why this film has become something of a cult curio.

Granted, on the surface, the elements are there: a pair of gun-toting sisters named Reg (Catherine Mary Stewart) and Sam (Kelli Maroney); '80s fright-hair fashions; and, um, Cyndi Lauper (well, her song anyway), thus aligning it in a cosmic symmetry of suckage with The Goonies and the golden age of WWF. But other than the accident of its birthdate, it's a sad, flaccid thing that flops there dead like a great poached squid for long, interminable minutes. The pacing is just awful, I mean it. It's a movie that suffers not only from having a terrible script, but from the director being the author of said script as well, meaning he thinks that the smug, idiotic screenwriter is a genius, every word sacrosanct and inviolable. The picture could have used an editor at the writing stage, an editor in post-production, and, what the hell, a foil asking the right questions every step along the way. Such as, "Why are they in a radio station, now?" and, "Why are they no longer in a radio station?" and, "Why is he in a house now?" and, "Why is that kid zombie politely waiting for someone to open the door for it?" There's also a subplot about a bunch of scientists in a bunker collecting specimens to harvest for...sorry, I got distracted during the explanation. The vaunted shopping-spree sequence is as vapid and lifeless as the rest of it, with our girls trying on a couple of outfits, dancing up and down stairs, and, um, that's it, I guess. Smushing enthusiasts will appreciate the part where they're trying on shoes--otherwise, you know, the problem is that there are so many opportunities squandered. Opportunities for social satire, for some kind of--any kind of--statement about consumerist culture, maybe on the blossoming "me generation" label. I think I strained a muscle looking for something interesting here. The irony of Night of the Comet is that it's a completely empty vehicle meant to describe completely vacuous people.

And after all the nothing that happens for too long, presented for your approval is boy-survivor Hector (Robert Beltran), who, despite being an inert character paradoxically running around shooting his mouth off and spraying his gun at things, suddenly represents this domestic plateau, arm around Reg with one-and-a-half adopted kids materializing in their bliss. At the same time, Sam pairs up with a douche-y Ken Doll (Marc Poppel) in a convertible who, in a twist that makes no sense except to make him analogous to her sister somehow, turns out to be the guy who beat Reg's score on the Tempest arcade game at the beginning. So, what's happened essentially is that Eberhardt has written in something he thought was a clever coming full-circle that instead suggests incest subtext. It's the sort of thing that happens when you don't really have any sense of control over or perspective on what you're doing and yet go ahead and do it anyway. Here's the worst part: Eberhardt's boring film has been awarded shambling, unnatural half-life wherever it is that cult movies go to exist when, in reality, I suspect that the veneration for it ekes from the same font that adores The Room and Manos: The Hands of Fate. For the record, it gets half-a-star for the line "You were born with an asshole, why do you need Chuck?" Night of the Comet is a cult movie for people who don't like them. 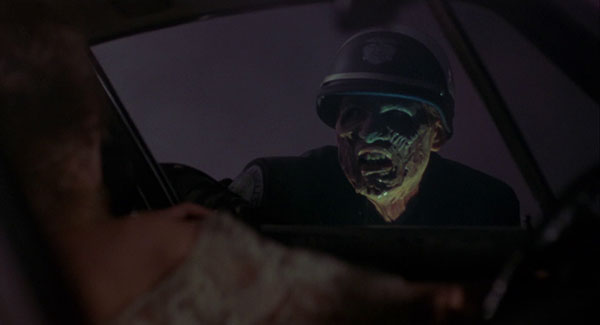 THE BLU-RAY DISC
Kudos anyway to Shout! for bringing the benighted thing to Blu-ray through its Scream Factory imprimatur in a 1.85:1, 1080p AVC-encoded transfer that makes the shoestring contraption look as good as it possibly could, I bet. (Note the cover art reports an aspect ratio of 1.78:1, a negligible misnomer.) A lot of the outdoor scenes were shot with graduated filters to simulate a post-comet landscape, reminding a little of the not-well-aged Soylent Green exteriors but attached to a far less noble affair. Interiors show decent-enough detail that I found myself scanning the movie posters on the walls of the projection booth that constitute Reg's salvation; you take what you can get. Alas, the image is finally too soft and mulchy, lacking in dynamic range. Lossless 2.0 and 5.1 remixes adorn the flick in DTS-HD MA, both of them sounding similar because of their front-heavy focus. Sadly, you can hear all the dialogue very clearly.

"Valley Girls at the End of the World" (15 mins., HD) catches up with Stewart and Maroney some thirty years later. Both are aging well, though only Maroney betrays anything like an interest in film history or filmmaking or Night of the Comet or anything like that. Stewart has a lovely, toothy grin and nothing to say, making it all the more lamentable that the duo pair again for a moderated audio commentary that has Stewart offering stuff like "I don't play video games! I was faking it!" and Maroney observing that co-star Beltran had co-starred previously with Mary Woronov (who plays one of the underground scientists) in true cult-classic Eating Raoul. When Maroney teaches a few things here and there about post-production inserts, Stewart says, "Really? That wasn't your leg?" Oh, geez. "The Last Man on Earth?" (12 mins., HD) has Beltran recalling the shoot and the casting and how it was a really great experience, and did you know he was in Eating Raoul with Mary Woronov? "Curse of the Comet with David B. Miller" (6 mins., HD) features makeup guy Miller, who elaborates on the budget limitations and the challenges of creating stupid-looking zombies that don't behave consistently on a budget.

There's an animated photo gallery that lasts three minutes, a behind-the-scenes photo gallery that lasts five minutes, and a trailer, each given HD bumps to varying degrees of success. In addition to that one unlistenable yakker, there's a track with director Eberhardt that has the guy speaking with great energy about this film, about buying brick dust to be the remains of the denizens of Earth, and exhibiting general delight about how wonderful his film is and how on his death bed someone will point to him and say, "Hey, isn't that the guy who did Night of the Comet?" The third and final yakker, with production designer John Muto, finds the guy discussing the use of filters, shooting very early to ensure the L.A. streets were empty, and doing magic with no money. There's mild interest when Eberhardt seems to contradict Maroney's story about who improvised a specific line, but I'll be honest, I feel twenty years closer to death having sat through all three. You're welcome. 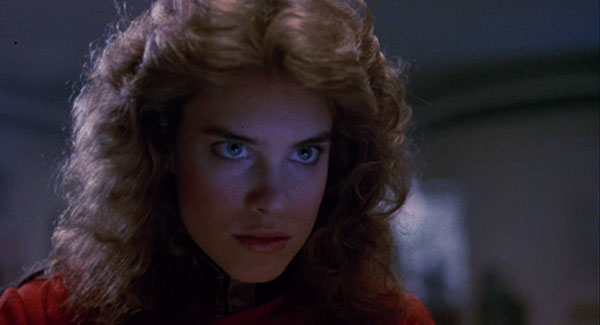