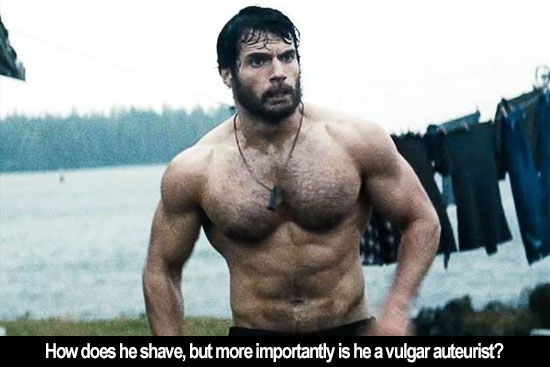 by Walter Chaw Zack Snyder's Man of Steel is 44 beautifully-constructed trailers strung together in the world's most expensive promo reel; at this point in his career, it's fair to wonder who it is Snyder's still trying to impress. Shapeless, structure-less, the movie aspires towards nostalgic, grandiloquent, patriotic pastiche but succeeds only in being disjointed, muted, and frustrating. Take the casting of Kevin Costner as Superman's terrestrial dad, Jonathan Kent. Perfect, right? But he's reduced to a fantastic scene where he reveals his adopted son's alien origin that is fantastic solely because Costner is not only magnificent when he's allowed to be in his wheelhouse (baseball player, cowboy, farmer), but also because there's a certain weight in the wrinkles on Costner's face and the grey at his temples. He's the embodiment of a specific brand of nostalgia all by himself, and the potential for him to be the spiritual centre of a soulless film isn't merely squandered, it's aggressively squandered. The Superman mythos at its best is about fathers and sons--the hero (Henry Cavill, playing Supes as Wolverine) has, after all, lost two fathers, orphaned twice in a strange land and compared visually and thematically to Christ in every incarnation. ("The last son of Krypton," n'est-ce pas?) It's a powerful theme, one that explains the enduring popularity of the character when wags have correctly identified that there are no real, viable external threats to someone who's essentially all-powerful. The Jesus story is meaningless if Jesus never thought of Himself as merely a man carrying a terrible burden. Consider the elevation of Watchmen's Dr. Manhattan to inscrutable WMD, or The Incredibles' Mr. Incredible's near-ruin in the role of family man. No, Superman's weakness is existential. I fear that Snyder--a director who seems to abhor difference and adore surfaces in his pictures--is exactly the wrong person to explore the irony of an immaculate conception tortured in the role of outsider.

Perhaps understanding his miscasting, Snyder abandons any intimations of depth about an hour in in favour of soul-deadening cataracts of destruction. Man of Steel is midway between Gattaca and that old PlayStation 2 game War of the Monsters: It's one part dangerous pseudo-science/philo-policy, one part boom-boom. There's a moment where a woman crawls out of the wreckage of Metropolis with an expression of exhaustion and exasperation that precisely captures the aspect by then of the picture's abused audience. Film by film, Snyder approaches the exact artistic, if not necessarily subtextual, ethos of Michael Bay. More's the pity, as there are moments in each of Snyder's movies of real iconographic power: Dr. Manhattan in Vietnam, the first ten minutes of Dawn of the Dead, even the stray composition in Sucker Punch.

It's possible that it's this very promise that calls into harsh relief the lightness of the connective tissue in Man of Steel; it feels like Snyder has attempted to address any flat spots by getting rid of them altogether. Charted on a graph, the rises and falls in action in Man of Steel would look like a mouthful of jagged teeth. It's exhausting, dada even, a series of vignettes that flashes back to Superman's childhood saving schoolbuses then forward to a hirsute loner engaged in the Deadliest Catch before Ice Road Trucking in search of enlightenment of some kind. Would that it had instead relied on Russell Crowe (as his alien father) and Costner to be the signposts for Superman's irritating decency instead of the far more disturbing suggestion that the wellspring of all goodness is God (in the thwarting, sort of, of Kryptonian Eugenics) and Country (in Superman's reassurance to a nervous American military that "I'm from Kansas! You don't get more American"--yes, tell that to Thomas Frank), conveyed in the visual shorthand of linen on clotheslines and Old Glory flapping in that same sepia wind.

Begin this time around with an extended battle sequence on the doomed planet of Krypton, where top scientist Jor-El (Crowe) wages a 1950s ideological war against top soldier General Zod (Michael Shannon--wasted). Zod wants to stage a coup; Jor-El wants to send his child-of-love-not-pods to another world, knowing that his people have strip-mined their own to collapse. Yes, Man of Steel is inches away from becoming the Captain Planet movie nobody wanted, or the Superman IV redux everyone fears. Zod is exiled to the Phantom Zone for his crimes along with hench-supervillains not-Ursa Faora-Ul (Antje Traue) and not-Non (some eight-foot CGI guy), meaning that although Krypton goes bang, they've been spared to torment the prodigal (Cavill) in exile on our modest Earth. Part of the tension here is that Jor-El believes that an Aldous Huxley-an genetically-engineered future is not conducive to free will, while Zod believes that boom, crash, opera. Also, Zod wants to terraform Earth into an exact replica of Krypton because was engineered to be pro patria and all that--or pro planeta, as the case may be. But what is the measure of sin when Superman himself is every bit the jingoistic, nationalistic demagogue that Zod is? All of it's complicated besides, because if you don't do a good job of establishing that there's a nurture element to Superman's morality through his dual tutelage by Jonathan Kent and the ghost of Jor-El, then all you have left is the uncomfortable realization that Zod is right: goodness and right are birthrights of being American. When this Superman, in disguise as Wolverine, defends the honour of a diner waitress by stoically accepting a pitcher of beer over his perfect ebony locks, is that a product of his upbringing, or his genetics?

All heady stuff, and all stuff that Man of Steel overlooks in favour of dedicating a solid hour of its distended 145-minute running time to punching. The highlight of this section is Faora-Ul's just-awesome demolition of a battalion of United States servicemen; the lowlight is the showdown between Supes and Zod, which ends with the literal levelling of city blocks--Man of Steel joins Star Trek Into Darkness on this summer's unexpected blockbuster roster of too-late 9/11 post-mortems. What the picture does, Chronicle and Cloverfield already did, and did better. Snyder does offer a quick shot of a young Superman reading Plato's The Republic as a mild sop to character-development snobs, yet it lands with no greater impact than one of Tom Cruise's clones reading Macauley's Lays of Ancient Rome in Oblivion. Better to have Supes reading Nietszche...or Juvenal, what with all the "bread and circus."

Oh, and there's a Lois Lane, Girl Reporter character (Amy Adams) who spouts tough talk ("Now, if we're done measuring dicks…") while falling in perfunctory love with a cipher in nubby tights who says stuff like, "Where I come from, this symbol means HOPE!" Adams is wasted, needless to say, as is Crowe, as is Shannon. I would say that Diane Lane as a dizzy Ma Kent and Laurence Fishburne as surprise affirmative action DAILY PLANET editor Perry White are wasted, too, but it's hard to say that about Lane or Fishburne anymore. Sufficed to say they're not good, and it's hard to tell if that's because they're not given anything to do or because there's nothing they can do with the nothing they're given. Costner emerges as the hero of the piece, for what it's worth, though his reward is a silly and too-soon screen death. I guess what I would say definitively is that Man of Steel answers the complaint about Bryan Singer's Superman Returns being too thoughtful and measured in as loud and pandering a way as possible. Bring on the sequel, this one's gonna make a fortune.

I thought Man of Steel was the best Superman movie to date, personally. The Reeves versions were so god-awfully cheesy that I am unwilling to accept any argument for them unless the person arguing explicitly states nostalgia as the motivation.