originally published September 21, 2009
Too long for Twitter, too brief for the capsule page, some quick takes on films screened at this year's TIFF: 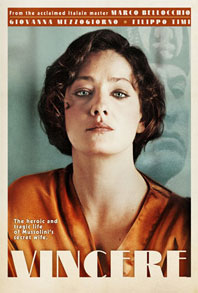 Vincere (Win) (d. Marco Bellocchio)
Structurally and even editorially, the oddly-titled Vincere (Win) is kind of a mess, but the badass opening scene hooked me. Therein, a slender, dark-eyed journalist with a good head of hair--you guessed it: Benito Mussolini--sets a pocket watch and gives God five minutes to strike him down; if he's still alive when time runs out, Mussolini (Filippo Timi) tells the pious crowd gathered before him, it means there is no God. I really wanted to like this guy, but the movie's about his mistress and alleged other wife, Ida Dalser (Giovanna Mezzogiorno, who has the sort of face you can lose yourself in), whose story pretty much precludes any chance of that. Ida bears Mussolini a son and sells all her worldly possessions to subsidize his fascist newspaper, but as soon as his political career starts to gain a little traction, he has her exiled and eventually institutionalized. (Benito Jr. (Timi again) is committed as well once he reaches adulthood.) I'm not sure what the movie's out to prove, other than that Mussolini was a fucking fuckhead, but it's hard not to feel a subversive tickle during the fairly-graphic sex scenes between he and Ida, which reduce Il Duce in the act of giving him human urges. As much as veteran director Marco Bellocchio wants to honour Ida's Snake Pit ordeal, he does seem a little wistful about the aesthetics attendant to her ruin. Indeed, Inglourious Basterds might be the second-most cinema-fetishistic war movie I've seen this year, and it's hard to deny the strange enchantment of a war hospital tableau in which religious silents are projected onto the ceiling to placate the wounded. ***/4