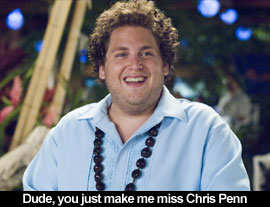 by Walter Chaw Listen, I have a family. There are so many places I'd rather be than in a theatre watching Forgetting Sarah Marshall, listening to the reaction elicited by three fleeting full-frontal shots of male nudity and trying for the life of me to understand how a comedy that clocks in at nearly two hours could elicit only one real laugh, maybe two. There's a potentially interesting discussion about the exploitation of the male form in Forgetting Sarah Marshall and how, in general, the reaction to male nudity is a hell of a lot different than the reaction to female nudity (there's a good reason that Colin Farrell's penis was excised from the already-unintentionally-funny A Home at the End of the World: male nudity is a threat you respond to with laughter; female nudity is an invitation you respond to with various levels of sexual discomfort)--but you can still have that discussion without actually enduring the picture. You could try to figure out how it is that Judd Apatow has parlayed his newfound hitmaker status into a cottage industry of filthy family-values flicks that fall lock-step behind one another while increasingly raising suspicions that what they're really preaching is ultra-conservative (chastity, pro-life, anti-fag) all the way down the line. If Forgetting Sarah Marshall doesn't end in a wedding, it's only because it ends before the hero and his prize get the chance. It's a romcom pretending to be a guy-flick, and I hope that's the kind of garbage we can all agree is garbage.

What's troubling about this picture and stuff like it (the regrettable remake of The Heartbreak Kid is the film Forgetting Sarah Marshall most resembles) is that there's an awful lot of hate and cruelty packed in here front and centre. There's nothing especially wrong with the movie's streak of conservatism except that, like most popular conservatism, it's packaged with an attendant level of intolerance that, if care's not taken, becomes inextricably tangled up with the philosophy. Take, for example, the waiter (Jonah Hill) who wants the approval of the rock star Aldous (Russell Brand) and is rewarded for his fealty with the dog's helping of abuse. He's the scapegoat of Forgetting Sarah Marshall, and he's not a piece of shit so much as just pathetic and therefore the perfect--and last--receptacle into which the audience for stuff like this tosses their psychic rubbish. The measure of a picture's worth can be divined by the targets it feels are low enough to be beneath its demographic: Matthew the waiter is such a profound loser that without any offense save his dreams and passions, he's made the victim of every single character and viewer. Get any lower and you'd have to dig a pit. Forgetting Sarah Marshall defines a dangerous primate social phenomenon without expending too much energy in introspection. Its pleasures are based on dicks and tits, while alcohol and fisticuffs are confused with the possibility for chivalry and romance in a landscape so ravaged and improbable that it imagines the suddenly shut-up! beautiful Mila Kunis falling for lumpen everyman Jason Segel. How this is very much removed from Ron Jeremy being a porn star is beyond me: both play on this fantasy that women like Kunis are available to men like Segel and, therefore, to every schlub sitting in the dark chucking blunt elbows into each other's rib cages at every failed joke and rattle of humiliating slapstick.

All would be forgiven, though, were Forgetting Sarah Marshall the least bit funny--were it well-paced, cunningly edited, or insightfully (or even cleverly) written. But it's none of those things. It looks bad, it plays like a Conestoga with a broken wheel, and the places where it finds humour and sentiment are bled dry by an utter lack of grace. What happens is that Peter (Segel) gets dumped by Sarah (Kirsten Bell) and goes on vacation, only to find that Sarah is there with her new rock-star boyfriend. Luckily, angelic receptionist Rachel (Kunis) takes pity on him and the usual machinations kick into gear as Peter wins the girl, loses the girl, and wins the girl back in some mawkish public display. It's wearying, the endless scenes of Peter weeping piteously; exhausting when the standard pussy-whipped, sarcastic best friend (Bill Hader) does the standard sidekick in a scatological two-step tango; and just woeful when Paul Rudd makes his perfunctory appearance as a burner beach bum with no other function than to be to this little ejaculate of flicks what Rob Schneider is to Happy Madison joints. Here's where it fails: there's a scene where Peter, in the midst of his mourning, is discovered in his destroyed apartment listening to Sinead O'Connor singing "Nothing Compares 2 U," which is not funny; as the scene progresses, in the background we (barely) hear the tinny strains of The Smiths' "Heaven Knows I'm Miserable Now," which is frankly hilarious. But that's not the joke, is it? It's the afterthought--a prime example of how decent ideas in recognizable scenarios can be botched beyond redemption. Forgetting Sarah Marshall has the misfortune, perhaps, of being on the tail end of a fad, yet if it were any good, that wouldn't matter. Originally published: April 18, 2008.