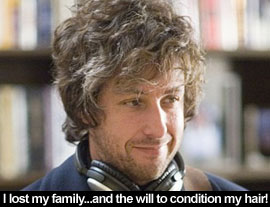 by Walter Chaw In response to the charge that critics are "downers" because they're too judgmental, a colleague and friend said on a panel that I participated in that some films only deserve judgment. It's a wonderfully bleak declaration, and dead on--think of it as an expansion of Pauline Kael's belief that no one ever takes the time to bash terrible pictures. But there's more to it than simply that brittle shattering of cinema's impregnable mythic mystique. I think certain movies deflect even judgment--movies that are the exact equivalent of, say, Michael Bolton and Kenny G collaborating on a cover of a Richard Marx song. Rail against them if you must, but there's no sport in it, and definitely no swaying of the assembled masses. There are films that are what they are, deserving neither praise nor condemnation in providing precisely the comfort of a tattered terry cloth robe worn ritualistically until disintegration. It's possible to meticulously, ruthlessly, intellectually deconstruct the aesthetic and functional properties of a favourite pair of sneakers, you know, but it's masturbatory and redundant and like swatting a fly with a Buick. I suspect that deep down everyone knows films like Reign Over Me and TMNT are as worthless as a plug nickel, that their appeal lies entirely in the fact that they'll present no surprises along with their usual meek payload of cheap emotional prattle and pocket uplift. And I'm not saying there's nothing wrong with that, either--I'm just saying I feel like I don't have much more to say after reviewing the same fucking movie about a dozen times a year.

Reign Over Me takes its title from a song by The Who that insinuates itself as part of the narrative whenever Bruce Springsteen and Jackson Browne aren't carrying the load. Adam Sandler is Charlie Fineman, an unfortunate soul who lost his wife and three daughters on one of the 9/11 planes; Don Cheadle is Alan Johnson, a dentist pal of Charlie's stuck in a perfect marriage that's driving him crazy. What these men need is a shot of Adult Contemporary Movie perspective, and in the film's "meet cute," Alan reunites with Charlie as Charlie putters by on what appears to be a street-legal motorized scooter. Because Reign Over Me isn't much of an allegory for post-9/11 New York and doesn't carry with it either a hint of politicism or, really, a complex thought in its head, it's possible to take the contrary position that it both exploits 9/11 for its own minor melodramas and doesn't because Charlie's tragedy lacks resonance. (Ultimately, the film's failure to suture is its best defense against any kind of analysis.) No question that Sandler's manic man-child/berserker persona is exploited, though, to embody post-traumatic stress disorder, which is complicated again with the confusion of whether it's the disorder being misused or Sandler himself. No matter, as Liv Tyler--looking and talking an awful lot like Jennifer Coolidge these days--materializes as the magic therapist (in place of Spike Lee's "Super-Duper Magic Negro," which Cheadle manages just barely to avoid as he did not in Brett Ratner's The Family Man), and triple-threat writer/director/actor Mike Binder can't resist the tough-, straight-talking receptionist (Paula Newsome) to inject the requisite amount of "sassy" into the vanilla proceedings.

Charlie manifests his malfunction by endlessly remodelling his kitchen and playing video games while listening to his white-guy vinyl collection; and Alan manifests his by rolling his eyes the moment his wife (Jada Pinkett Smith) suggests that it's not acceptable behaviour for a married guy with two kids to stay out all night without calling home. Good thing Charlie's there to free Alan's inner Charlie while Alan's there to rein in Charlie's outer Charlie. Meanwhile, emotional hand grenades are tossed from a safe distance to elicit audience and character responses: fathers die; flashbacks to dead kids are indulged; courtroom sequences end with sage judges (Donald Sutherland, perhaps the greatest actor of the '70s, here reduced to fourth billing behind Sandler) delivering withering speeches to accountants and lawyers; and everymom Melinda Dillon cries. Upping the ante on the misogyny sweepstakes (there are no positive women characters in Reign Over Me, not that it's really risible in any way), Saffron Burrows plays a woman severely stricken with jungle fever and a fit of the crazies, used mainly as cruel comic relief before she's used as the deus ex vagina. Shot in Hi-Def, the movie's New York looks like it might if Rob Reiner had made The Fisher King, all rounded edges and smooth atrocity--and the results seem similar, too, as Charlie gets to fly his freak flag high and, occasionally, go postal on the people who care for him for no discernible reason. Is there a moral in here about gathering rosebuds? Or the value of friends and families that keep a distance? I guess so, if you're retarded.

Then there's TMNT, a resurrection of the Teenage Mutant Ninja Turtles faux-chise that encompasses a weird Chinese acrobats-in-rubber suits live-action trilogy, an animated series, a comic book, a Halloween costume industry, and now an all-CGI feature. It comes across as something you flip past on Cartoon Network while looking for "Futurama" repeats, with a plot about ancient prophecies, immortal warriors, and lots of swords that distills Highlander for the diaper set. The four titular mutant turtles are trained in the silent arts by a rat voiced by the late Mako in his final role, giving the picture a little bit of pathos for exactly the audience that will be avoiding it like the plague. Its NYC is as edgeless as Reign Over Me's, strangely enough, which is to say that the animation looks pretty cool and that I laughed on purpose a couple of times, though it's never kinetic or perilous. The story is as machine-extruded as the animation, having to do with a Patrick Stewart-voiced industrialist looking for ancient artifacts yadda yadda yadda and then Zhang Ziyi voices a girl ninja and then four turtle ninjas and then witty banter and...and who gives a good shit? TMNT is exactly what it is--nothing more, nothing less. Fans will be pleased, non-fans won't register it as a blip on the radar screen. Think of it (of them) as a serviceable tune in a niche genre with zero crossover appeal or potential; it doesn't need a review, it just needs a marquee so its audience will find it and get to the business of forgetting about it. It's hard to believe sometimes that I'm not just wasting my time. Originally published: March 23, 2007.

THE DVD
by Bill Chambers Warner brings TMNT to DVD as a flipper containing widescreen and pan-and-scan editions on opposite sides of the platter. This and the concurrent release of Unaccompanied Minors fall dramatically below the studio's established standards, helping to foster a conspiracy theory about consumers being pushed towards the HiDef formats in bad faith. Averaging an appalling 3mbps, the image looks like VCD video in either incarnation: Saturation is actually quite strong and black levels are respectable, but on my 46" LCD display, mosquito noise around fine detail proved a constant distraction. The accompanying DD 5.1 audio is comparatively flawless, a credible platform for a credible, bassy mix.

Extras begin with a feature-length commentary from Tom Hulce-esque director/co-writer Kevin Munroe, an affable-enough fellow whose future work I nevertheless plan to avoid. Munroe discusses the origins of the project (mainly from his involvement on), points out in-jokes among friends and family, and generally operates under the delusion that he's made something of value. Whether you want to hear it or not, Munroe's voice tramples over the remaining supplements save "TMNT Voice Talent First Look" (5 mins.), a hilarious EPK-style piece in which Patrick Stewart, Sarah Michelle Gellar, and Laurence Fishburne use thespian doublespeak to justify this prostitution of their talent. At least Gellar admits that she liked being able to go to work without putting makeup on, though she says this of course while looking like a Revlon bomb exploded in her face. Anyway, what appears to be a formidable collection of scratch tests/pre-viz animatics--"Alternate Opening" (3 mins.), "Alternate Ending" (1 min.), "Monsters Come Alive" (3 mins.), " Raphael's Rough House" (2 mins.), "Roof Top Workout" (6 mins.), and "Still Wanna Fight?" (3 mins.)--is, all things considered, an exercise in restraint compared to the kind of ephemera that winds up on Pixar discs.

Two semi-finished extended scenes ("Mikey's Birthday Party" (3 mins.) and "Splinter Gets Cake" (2 mins.)) seem doubly superfluous with Munroe yammering on; weird that that's the only way you can watch them. Capping the disc, some HD-DVD/Blu-ray propaganda cues up on startup, as do 4:3 previews for The Last Mimzy, GameTap, Fred Claus, some Turtles merch, "Space Ghost and Dino Boy", "Birdman and the Galaxy Trio", and "Droopy: The Complete Theatrical Collection". Originally published: August 6, 2007.