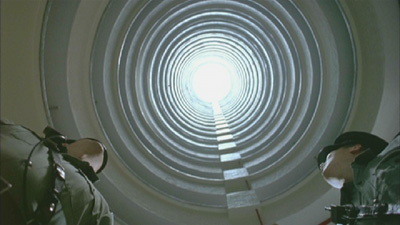 Start with Doyle behind the camera for Fruit Chan's lauded feature-length Dumplings, trimmed down to anthology size for inclusion in a piece that feels, pleasantly, like three phases in a conversation with one evolving consciousness. Something that initially appears to be another Category 3 tale of the things that make their way into Chinese food, Dumplings quickly resolves into a strong statement on cultural diffusion, traditional remedies, and the toll of institutionalized misogyny. Its details are extraordinarily intimate and discomfiting (it's the most invasive picture about the female anatomy since Dead Ringers), while Bai Ling serves as a counterpoint just by her presence, introducing an unhealthy dose of uncomfortable sexuality--a whiff of the sexpot in the figure of an ageless old woman (she speaks in Mandarin, the rest speak in Cantonese--the stateliness of the "State" language a subtle indicator of her character's "real" age) who peddles youth through the filling of her special dumplings. A rich woman (Miriam Yeung) visits her for a drink from a certain fountain and an aging ex-television star loses her philandering husband--and from that potting in conventional soil, Chan nurses a stern warning about the toll of governmental sanctions on childbirth on every level of society. If only by transference, notice our own ceaseless ideological debate concerning the abortion issue on the block as well. With a brilliantly obscene soundtrack and an indelible image of Bai Ling singing a bawdy folk song as one of her customers happily slurps and crunches away at her grim repast, Dumplings is heady stuff--and uniquely squirm-inducing to boot. The full cut of Dumplings, complete with a different ending and a far more leisurely pace, adds over fifty minutes to the running time but thus far lacks North American distribution.

South Korean phenom Park Chan-wook chimes in next with Cut, possibly the most balanced short of the three and originally (and logically) positioned at the end. The intrigue begins when hotshot director Ryu (Lee Byung-hun) wakes during a home invasion to find himself bungeed to a wall and his concert pianist wife (Kang Hye-jung) pinioned to her grand piano, her fingers super-glued to the keys in preparation for a whack from their schlubby torturer's (Lim Won-hee) axe. The problem, as it's presented to Ryu, is that Ryu's got it all and still seems to be a nice guy, thus deflating the assailant's theories about nice guys finishing last. And so Ryu is to strangle a little girl the man's abducted at random--or every five minutes, he'll chop off one of the wife's fingers. Park's gift is his genuine inquisitiveness: he wonders if it's possible to actually locate a moral tether in the exacting of vengeance, and he hopes, along the way, to marry Greek tragedy with post-modern self-reflexivity. Its last third a model of displacement and the art of misdirection (compare to the bumbling ass-circus of last year's Saw), Cut addresses issues of honour and betrayal, sacrifice and duty, and, most importantly, the façades we erect to keep us at arm's length with the lies of our lives.

Takashi Miike rounds out Three... Extremes with Box, a piece that reminds a lot of Masato Harado's Inugami in its stately execution. Doyle's palette is subdued here to black, white, and one shade of grey, and in truth our post-millennial familiarity with the vagaries of J-horror preclude many chills in the spectral little girl half-obscured by a doorway at the end of a hall, but this incest-darkened tale of a circus family and the tragedy that one act of jealousy touches off does enthral until the obscene, incomprehensible last shot. Had Three... Extremes begun with the Miike and ended with the Park, there would have been a kind of cohesion in its movement from formalist-to-modernist-to-post-modernist--but as it is in this shuffle, the picture ends on its weakest note (it's almost as though Miike is passing the title of the Pacific Rim's King Sicko on to Chan and Park), softening the kill blow right when the existential quagmire should be stickiest.

An example of a movie that well and truly has its shit together, Paul Etheredge-Ouzts's excellent HellBent bills itself as the first "gay" slasher film and then transcends the gimmick to strike at the heart of the essential tragedy of "coming out" for many gay men: that at the moment of freedom, they're cut off at the knees. HellBent gains resonance in the fact that the modus of its shirtless, devil-masked antagonist (the film's feral/virile version of John Carpenter's Shape) is a super-sharp sickle with which he decapitates his victims--long the cinematic shorthand for castration. Sure, sexuality is at stake, as it is often in slasher cinema (and marvel at the moment in a club called "Meat" where a man is mock-raped by two chainsaw-wielding boy toys), but here, it's not so much about the fucking as it is about the knife-in-wax at the critical moment of sexual actualization. Fans of the sub-genre can probably mark the order in which its central foursome will (or won't) be dispatched--but consider mousy Joey (Hank Harris) discovering affirmation the moment before his ugly execution. Or, better, look to the lonesome complaint of Tobey (Matt Phillips), who actually finds himself pursuing the instrument of his demise, stripping off as he does the adornments that disguise the vulnerability of his true self.

Shot like an '80s slasher with all of the period's appreciation for lurid set-pieces and gore (it looks, and this is a compliment, like Tobe Hooper's Funhouse), HellBent delivers the goods with a tremendous amount of respect while elevating the conversation along its own parameters. There's a sense of true peril in the fates of our heroes, and in that identification, the picture--like "straight" slasher flicks that have its predominantly male (predominantly adolescent) audience identifying with a woman protagonist--manages to universalize the struggle for existential stability across battle lines drawn according to sexuality. Blue-eyed hero Eddie (Dylan Fergus) pleads at one point to a pal on the police force for her to not let "them" make this "just a gay-bashing thing," and amazingly enough, HellBent complies. There's an ineffable sadness about it that speaks to the skill with which it's been brought to the screen: it's a real movie about real people who, at the moment of their greatest satisfaction, are cut down and emasculated by a world that still wants to patronize a film like this into some kind of ghetto. Smart, sensitive, human, and sexy (note the murder of Chaz (Andrew Levitas) in a hopping nightclub): there's a lesson in the fact of HellBent; I'm not too good to learn it again. Originally published: October 31, 2005.

THE DVD - THREE... EXTREMES
by Bill Chambers Lions Gate presents Three... Extremes on DVD in a 2-disc set that devotes its second platter to the feature-length incarnation of Dumplings. Both films are presented in state-of-the-art 1.78:1 anamorphic widescreen transfers of comparable matting and colour-timing during those scenes that permit an A/B comparison. Perhaps it's missing the HiDef 'pop' of Tartan's Asia Extreme titles, but the more filmic definition suits Christopher Doyle's typically satiny cinematography. The accompanying Dolby Digital 5.1 audio adopts a different character for each new "extreme," with Cut boasting the most aggressive use of the discrete channels and The Box the least; as Takashi Miike says in his subtitled yakker for The Box (sadly, the other two segments are commentary-free), he decided to buck the trend by trying to create tension through silence. Unfortunately, the alternate version of Dumplings is in Dolby 2.0 stereo (with optional English subs), not 5.1 as the keepcase claims.

Miike's uneven and unessential yak-track is the only extra on Disc 1 (limiting the discussion to plot and technique, he refuses to play armchair Freud, insisting that we draw our own lines between the picture's objective and subjective realities), and Disc 2 isn't exactly loaded beyond Dumplings, either: you get "The Making of Dumplings" (15 mins.)--which rather confusingly refers to the two versions of Dumplings interchangeably--plus a block of trailers for Audition, Saw, Saw II, Fear of Clowns, Cerberus, and Green River Killer. As for Dumplings, it's quite a different animal in its expanded form, starting with its eagerness to implicate Viagra culture in the female quest for eternal youth. Tony Ka-Fei Leung's Mr. Li emerges as a true catalyst for the climactic turn of events in the longer film, whose generally franker tone facilitates a better, harsher ending than the one cribbed from Michael Jackson's "Thriller" video for Three... Extremes. After seeing the full perversity of Fruit Chan's vision come to term, no pun intended, I find it difficult to imagine revisiting Dumplings in the context of Three... Extremes--though to be fair, the short-form Dumplings suffers from brevity as opposed to truncation. Originally published: February 27, 2006. 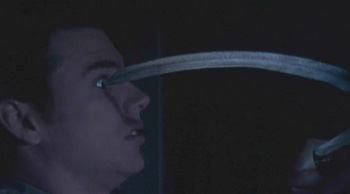 THE DVD - HELLBENT
by Bill Chambers Through Genius Products, the here! channel's boutique label shepherds HellBent to DVD in a 1.78:1 anamorphic widescreen transfer. Sad to say this is a bootleg-quality presentation: the decision to source the DV production from a 35mm blow-up costs the film much of its aesthetic richness; shadows are so thick and impenetrable as to make one wish for a pair of night-vision goggles. The telecine operators seem to have introduced edge-enhancement into the image in an effort to compensate, but instead they've amplified the ringing artifacts intrinsic to tape-to-celluloid conversions. If it's tolerable, it's mainly because this movie is fucking awesome. The DD 5.1 audio is much less problematic, though the mix itself is disappointingly hemispheric and the instances of ADR tend to stand out.

The only significant supplement is a HellBent-related episode of "here! backlot"--a 30-minute, spoiler-laden talking-heads featurette that doesn't start cooking until it's half over, once all the plot-rehashing is out of the way. Disappointingly, the piece never connects the dots between the late, great schlockmeister Joseph Wolf's desire to produce a 'gay Halloween' and writer-director Paul Etheredge-Ouzts's involvement in the project (was he commissioned? Did parallel courses just happen to intersect?), but the tangent that delves into Steve Dyson's visual effects is revelatory. (HellBent's use of CGI is astonishingly seamless.) We also learn that almost the entire cast is straight--Will Smith has never looked like a bigger pussy for refusing to kiss Anthony Michael Hall. Trailers for HellBent, Third Man Out, Dante's Cove, Julie Johnson, April's Shower, and Deadly Skies round out the disc. Originally published: September 26, 2006.