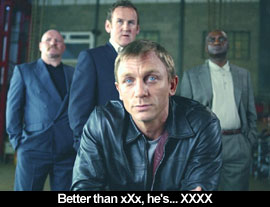 by Walter Chaw Producer Matthew Vaughn makes his directorial debut with the Brit underground gangster flick Layer Cake, and he does it with a sexy, cool savoir-faire that runs slick and smooth. It's softer than Jonathan Glazer's fabulously decadent Sexy Beast (most of that due, no doubt, to there being no baddie the equivalent of Ben Kingsley's Don Logan in Vaughn's film) and more coherent than Paul McGuigan's Gangster No. 1, but it slips snug into the same conversation. Now that Guy Ritchie's been gobbled whole by his very own vagina dentate, it stands to reason that Vaughn, Ritchie's producer on Lock, Stock, and Two Smoking Barrels and Snatch, would seek to fill the void left in the only U.K. pop genre with any sort of international currency all by his own self. Yet the product of Vaughn's hand isn't so much an imitation as it is a refinement: not better necessarily, but calmer--closer to the lounge lizard James Bond of the 1960s than to the feisty punk Michael Caine heisters from roughly the same period, though Layer Cake is infused, of course, with a healthy dose of nastiness and post-modern irony.

When a stolen shipment of one million ecstasy tablets falls into the lap of our unnamed protagonist (listed in the credits as XXXX), the proverbial middle-man receives instructions from on high to unload them to the highest bidder. The title of the film refers to the multiple strata of criminals in the underworld that XXXX (Daniel Craig, fabulous) has to traverse to finally get to the point where he can grab the organized-crime brass ring of retirement to some private island. Things get strange, though, when XXXX is tabbed to track down the wayward daughter of godfather Eddie Temple (Michael Gambon, delicious); a Serbian hitman nicknamed "The Dragon" and saddled with a penchant for collecting heads turns up on the scene; and sexpot of the moment Sienna Miller surfaces in a hot little number to act the accidental femme fatale. Rat-a-tat (ring-a-ding-ding?) and every bit the film that Ocean's Eleven should have been, Layer Cake takes on the raffish personality of Craig's professional cad, gliding through its convoluted plot with the grace of a brass-knuckled ballerina. The violence has weight, the consequences are appropriately dire, the twists are twisty, and the tap-dancing is as professional and diverting as it is airless and forgettable. Not a bad thing, however, to be taken on this particular ride: if it's one that you've been on a dozen times before, after all, at least you liked it every time.

A ride of a different kind, South Korean auteur Kim Ki-duk follows up his incandescent Spring, Summer, Fall, Winter... and Spring with the couldn't-be-more-different but just as unbelievably good 3-Iron. It's the story of a beautiful young man (Jae Hee) who rides his motorcycle like a ghost through the streets of the city, placing pizza flyers on doors then moving in if they go undisturbed for a certain amount of time. He breaks, enters, fixes broken appliances, scrubs bathroom floors, and does the laundry in mute repayment for his temporary squatter status. Inevitably, he's discovered by an equally beautiful young woman (Lee Seung-yun) who spends a day shadowing him, unnoticed, as he washes her underwear, drives golf balls off her abusive husband's backyard green, and carefully peruses a black-and-white portfolio of nudes that he finds in the living room. They form a bond, unspoken of course, and ride off together for a while before 3-Iron takes a turn into the even more peculiar. The wake of the picture is a noisome one--I'm feeling the aftershocks of my two screenings some two weeks later.

3-Iron brought me to the unusual, delirious realization that I was watching a picture that's always unerringly insightful about the human condition and therefore intimately familiar, yet presented in such a way that I never for a moment dared guess what might come next. It's like finding the soft, familiar curve of your wife's breast on another woman: illicit, thrilling, and terrifying in equal portion. Ki-duk has somehow found a quicksilver vein into the well of archetype, telling an oft-told tale (love, natch) in a way that is at once of the meat, of the mind, and of the great collective nothing that connects we mermaids each to each. Poetry of the most minimal, most fulsome variety, it transforms that hoary old cliché of a character subjecting himself to a regimen of strict privation and dedicated training into something new to the senses. It's ravishing in its oddity, is what I'm saying, even though it isn't a novelty so much as a stupendously sophisticated leap forward in the art of telling a very simple story. The South Korean cinema is currently the best in the world--and Ki-duk is arguably currently its finest--definitely its most protean--director.

The journey undertaken by the heroes of and audiences for 3-Iron reminds of the one demanded with a ruder urgency by Palindromes, the new film from American director Todd Solondz. For his classic Welcome to the Dollhouse and his antidote to American Beauty's antiseptic smugness, Happiness, Solondz was summarily crowned the sometimes-horned prince of suburban discomfort. (His fourth film, Storytelling, is too interested in responding to his detractors--the mark of an oversensitive soul to the detriment of his scabrous intuition.) It's that quick labelling that suggests fear and loathing, of course, but like comrade-in-ideological-arms Neil Labute, Solondz, at his best, mines in his characters this naked, furtive helplessness to the vicissitudes of cruelty and love. For Solondz, they are the only constants in the human experience, certainly the only phenomena represented just as handily by black holes and bottomless pits.

The first time I saw Palindromes, I despised it. Drawn to reassess it by a sleepless night or two, I saw it a second time, then a third, then a fourth time without sound, then a fifth without image. By that point, the ambiguous politicizing of the picture (it presents the abortion debate in all its impossibly convoluted glory) became a sidebar to what gradually resolves as this lilting sketch of the unbearable burden of being human. It's like a palimpsest, Palindromes--there's something extraordinary hidden beneath its numerous distractions. It's a picture that finds me drawn in the tides of its main character, Aviva (played by seven actresses and one actor), a soft-spoken, tentative innocent with an aura of gentle befuddlement and unspoken desire. And as she's worked on by the arbitrary stupidity of life, she mints a gorgeous brand of grace in her absolute refusal (or perhaps it's an inability) to surrender to the absolute hopelessness of living. It's Solondz's first spiritual film, I think, the first picture to present something of a third option for his hero beyond death or suffering--thus it's ironic, to an extent, that it opens with the funeral for Dawn Wiener, the almost iconic heroine of Welcome to the Dollhouse.

Aviva is Dawn's cousin. Thirteen when she gets pregnant, she wants a lot of babies, because she understands innately that you can't know how much love there is in the world until you have a child. When she tells her mother (Ellen Barkin), her mother drags her off for an abortion that will leave Aviva sterile, inspiring her to hit the path through the proverbial woods in search of, in a way, her lost child. (It reminds a great deal of an almost unbearably naked Harlan Ellison story called "Croatoan" in which the author's alter ego chases one of his aborted foetuses into the New York sewer system only to discover an entire colony of his abbreviated kinder, riding alligators and calling him "father.") What she finds is Mama Sunshine (Debra Monk), a fundamentalist Christian in the Ned Flanders mold who has taken in a dinner-banquet full of children with crippling diseases and variegated disabilities mental and physical.

An introduction like the wedding dinner from Tod Browning's popularly misunderstood Freaks segues into a set-piece in which Mama's children invite Aviva (now played by a morbidly obese black woman) to join them in singing songs. My first reaction to these sequences was horror--my next several ran the gamut from self-loathing to extreme antipathy towards Solondz for, frankly, putting me in the position of challenging how much my laughter had to do with the joy of the children being exploited ("Sparkle Motion"-style), and how much of it had to do with my own gallery of neuroses and prejudices. In the end, what I gleaned from these sequences--culminating in a moment where one of Solondz's trademark fallen cherubs, Peter Paul (Alexander Brickel), shows Aviva an aborted foetus in a plastic baggie left at a landfill--is a chilling weariness with the complete uselessness of my outrage. It's too complicated for me to unravel the onion skins around how I feel about it all, and that helplessness is what I see reflected in Aviva's empty, doe-like acceptance.

What's never discusssed with Palindromes is that for all the hot-button issues in which it shrouds itself, it's a telling in part of the Prometheus/Epimetheus/Pandora (one brother tells another that his girlfriend is bad news) story of how the capacity to love and the capacity to be shitty to one another never change. After the surprising compassion of Welcome to the Dollhouse, the brilliant self-knowledge of Happiness, and the intellectual self-abnegation of Storytelling, Solondz arrives at a fable of the deconstruction in which his sweet, self-swallowing (hence the title) Sisyphus finds beauty in love, even if love's bitter reward has only ever been cruelty. And like the dark punchline for that Prometheus/Epimetheus/Pandora story, the last thing Solondz lets out of his box is Hope. That, more than anything else, makes Palindromes Solondz's most aggressively humanist piece, his most difficult and divisive, and for reasons completely independent of abortion, teen pregnancy, and the blue-state/red-state tango, the most damnably difficult to unravel. Solondz is talking about faith now--it's just that his god is a son of a bitch. Originally published: May 13, 2005.