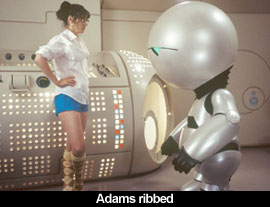 by Walter Chaw Back in 1992, I saw Douglas Adams speak at the Boulder Bookstore. He was there to stump the fifth book in his The Hitchhiker's Guide to the Galaxy "trilogy," Mostly Harmless, and he read from it a passage involving Marvin the robot and an overzealous security droid. When the time came for him to sign things, I slid my first edition of the first book under his pen for his illegible scrawl and asked him what the status was of the (even then) long-awaited film version of one of the most beloved surrealist, deconstructionalist texts in modern science-fiction. "Soon, soon," he said. Now, a mere twenty-six years after the 1979 publication of The Hitchhiker's Guide to the Galaxy, video director Garth Jennings finds himself at the helm of what is, in some circles, a film more hotly anticipated than the upcoming conclusion to George Lucas' little space opera. And The Hitchhiker's Guide to the Galaxy takes elements of the late Adams' long-circulated screenplay (punched up in its third act--fatally, I think--by Karey Kirkpatrick), but coasts along for at least an hour on the irreverence, the flat brilliance, of its source material. It brings a tear to the eye and a flutter to the heart while it lasts.

Arthur Dent (Martin Freeman) is the last man from Earth, an uninspiring example of a suddenly endangered breed. Our planet, you see, has been demolished by the bureaucratic Vogon race to make way for an interstellar bypass, leaving Arthur and his pal-from-a-small-planet-near-Betelgeuse, Ford Prefect (Mos Def), as hitchhikers on one of the Vogon construction fleet's ships. As Arthur comes to grips with the new Earth-less galaxy, he and Ford are whisked onto the stolen vessel of said galaxy's two-headed president, Zaphod Beeblebrox (Sam Rockwell), joining a ragtag crew that includes Arthur's would-be girlfriend, Trillian (Zooey Deschanel), and a manic-depressive android named Marvin (voice by Alan Rickman, movement courtesy Warwick Davis). The guide of the title, a best-selling tome designed to help travelers survive in the universe with just a thumb and a towel, is mentioned in passing in the early going only to never be spoken of again. Entries missed most: the one about God disproving Himself accidentally; and the two-word entry for the freshly-atomized Earth.

It's not the various departures (or the ridiculous ending) that doom The Hitchhiker's Guide to the Galaxy so much as the filmmakers' desire to strike a balance between pleasing devoted fans of the book and trying to construct a feature that doesn't explode out to the length of the original BBC miniseries. Shortcuts in narrative and character development are taken where they can scarcely afford to be made while too much time is spent with minutia like the jewelled crabs the Vogons club for sport. Without connective tissue, without even a hero to favour or identify with, the source's Python-esque elasticity becomes arbitrary and disjointed. Consider the cameos by John Malkovich as the high priest of a culture that worships a sneeze and Bill Nighy as Slartibartfast (a being who specializes in constructing custom planets), or a passage involving a sperm whale and a bowl of petunias: these are the sort of things that strike a pleasant chord of familiarity with the obsessed, yet they don't fit comfortably in a film that ends up feeling like a trivia game (three of the novel's four sequel titles are mentioned herein) testing a very specific body of knowledge. It's not a good film, but it's occasionally a pretty decent visual representation of a text--meaning, of course, that it's not good enough for an audience that doesn't know anything about Douglas Adams, and that it's most certainly not good enough for an audience that does. Originally published: April 29, 2005.