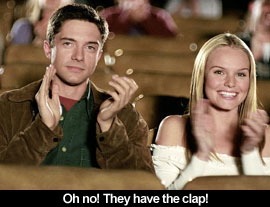 by Walter Chaw For those wondering what it would be like if one of those READER'S DIGEST "Drama in Real Life"s were ever made into a film, wonder no longer, for Touching the Void, packaged complete with suspense-shattering survivor testimonials and manageable tidbits of easily-digestible narrative, is a cunning simulacrum of the same. A feature-length dramatic re-creation in the television tabloid style, Touching the Void tells of a harrowing mountaineering cock-up that is, I guess, legendary in mountaineering circles for the same reason that dead NASCAR drivers are legendary in their sport. The problem though isn't with the ultimate banality of this account of one guy who crawls to safety down the bottom half a mountain he's already fallen down the top half of, but that the film of it mixes the victims of their own daredevil genes offering their perspective in front of a black backdrop with re-enactments featuring wheezy actors not entirely up to the task.

Its title suggesting a meet-and-greet with Ashton Kutcher, Touching the Void has its moments--most of them in the tension between a staunchly atheist climber and his sublime pursuit. But the real interest of the tale must lie in the margins between what director Kevin MacDonald chooses to tell in constructing his nature parable and what he chooses not to tell, as in the intimations that the mountaineering community condemned the non-crippled climber for cutting the cord on the other. Though a more rigorous investigation would not necessarily have improved the film (the trampling roughshod over the thin scrim between documentary and fiction is too irritating when undertaken with what seems a cavalier disregard for both), it might have taken some of the weight off its broken, load-bearing metaphor leg, and maybe not left room for an essentially stupid, interminable, out-of-place dream sequence in the process.

Also blurring the line between fiction and meta-fiction is Win a Date with Tad Hamilton!, a romantic comedy casting a real-life soap opera himbo (Josh Duhamel) as a fake soap opera himbo who, after a run-in with driving under the influence, acquiesces to the titular contest won by small town girl Rosalee Futch (Kate Bosworth), who's so smitten with Tad's magazine covers that she doesn't notice the diamond in the rough Pete (a genuinely good Topher Grace) right under her nose. No surprise that Rosalee is so virtuous that evil Tad decides to buy a ranch in West Virginny, the better with which to woo his backwater girl (Rosalee is the kind of milk-scrubbed pure girl-next-door homily with strands of silk streaming out of her ass as boys-next-door yowl and scratch just outside her periphery). And no surprise that the appearance of Sean Hayes as one of Tad's agents bodes as ill for the success of the film as any other picture unwise enough to cast Hayes as anything.

The fatal flaw of the picture is also the only thing to recommend it, as Win a Date with Tad Hamilton exists in a weird amuck time-warp where the world is eternally mired in an irony-free Norman Rockwell print. Likewise, the film seems constantly in a state of self-regard, worrying at the lines between its own fiction and the general fencepost fictions of its genre with a blithe enthusiasm that suggests Pleasantville minus any satirical intent. Its slipperiness more a product of not really knowing how to resolve any conflicts (and severely underwriting resolutions when they do come) than actual cleverness, that the film is accidentally thought-provoking about the nature of art and fiction speaks at once to how little author intentionality has to do with the dialogue, and to just how much time you'll have to ponder more entertaining things while you're watching Win a Date with Tad Hamilton!. Originally published: January 23, 2004.