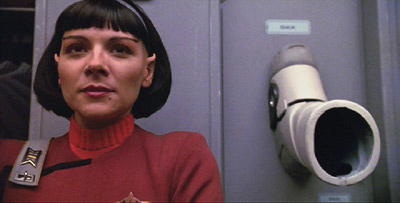 With half the dialogue--including the closing line of the picture--composed of literary quotations (a conceit that goes from flattering better-read viewers to padding exchanges) and many of the characters conceived (or reconceived, as it were) as testaments to director/co-writer Nicholas Meyer's scholastic fetishes, The Undiscovered Country is pickled in pedantry. Meyer, who was unfamiliar with the franchise before helming the pearl to its oyster Star Trek II: The Wrath of Khan, made a crossover success out of The Wrath of Khan in part by soft-pedalling the science, so it's ironic that he would steer the series towards something equally arcane--what's the difference, when all's said and done, between "the undiscovered country" and "deuterium purge vents"? Star Trek VI: The Undiscovered Country's best sequence unfolds on Rura Penthe, with Kirk bedding his first femme fatale since the TV show, a yellow-orbed shape-shifter (Iman, wife of David Bowie) in the tradition of the green lady etched on the collective consciousness by the original series. It's almost a classic episode unto itself, but the nostalgic kick is fleeting--although "Scooby-Doo" fans may get a similar charge out of the climactic woulda-gotten-away-with-it-too-if-it-weren't-for-you-geezers unmasking.

Although Shatner, Nimoy, and Kelley are, as always, a holy trinity, The Undiscovered Country is more like Meyer's first Sherlock Holmes picture since The Seven-Per-Cent Solution (which he scripted) than like his first Trek picture since Star Trek IV: The Voyage Home (ditto), and for most, this will qualify it as an antidote to the preposterous Star Trek V: The Final Frontier. (As Kirk plots a jailbreak, Spock and Vulcan Lt. Valeris (Kim Cattrall, pioneering a surprising number of her "Sex and the City" smirks given the character's deadpan directive), determined to prove their captain's innocence, do much antiquated detective work to eke out the owner of a telltale pair of gravity boots.) However objectively it improves upon its immediate predecessor, The Undiscovered Country is a heavy-handed yet curiously weightless swan song that, instead of sending old-school Trek out on a high note, ultimately completes the tipping of the cash cow that began with The Final Frontier. "Don't let it end this way, Captain," Gorkon pleads on his deathbed. Too bad nobody listened.

THE DVD
Paramount's Special Collector's Edition (SCE) reissue offers Star Trek VI: The Undiscovered Country in a 1.97:1 anamorphic widescreen transfer. The film's definitive dimensions have long been a subject of debate among enthusiasts, since it was projected in some theatrical venues at 2.35:1 and in others at 1.85:1. (This presentation more or less represents the "full-gate" image of the Super35 negative, Meyer's apparent preferred aspect ratio.) I never saw the previous DVD release of The Undiscovered Country, but I do remember the irksome LaserDisc, with its thin letterbox band at the top and its gargantuan black bar at the bottom, always as though you were looking up at rather than directly at the film.

The aperture is properly centered on the SCE, and the picture quality is a little less noisy and a lot more gleaming, if simultaneously a bit underexposed and oversaturated. The Dolby 5.1 track meanwhile betrays the fact that this was one of the earliest motion pictures mixed digitally: the explosion of Praxis rattles the room within seconds of the directed-by credit, while Cliff Eidelman's "The Planets"-influenced score and the whipping winds of Rura Penthe open up the discrete soundstage to a significant degree. As for the rest of Disc 1, one of Michael and Denise Okuda's lesser trivia streams coincides with a film-length commentary featuring Meyer and co-screenwriter Denny Martin Flinn that's rendered superfluous by the second platter's exhaustive supplementary material, save for Meyer's candid admission of failure with regards to the picture's denouement and Flinn's observation that everything a Trek scribe writes becomes canonical.

Disc 2 breaks no new ground in terms of the SCE format. In "The Perils of Peacemaking" (26 mins.), Nimoy and Meyer engage in a "Rashomon" account of a fateful walk on the beach, during which the story for The Undiscovered Country was concocted. Kirk is compared to Richard Nixon, Meyer says he modelled Warner's prosthetics after Abraham Lincoln, and Ambassador Dennis Ross of the Washington Institute for Near East Policy sheds light on the assassinations of peacemakers like Rabin and Sadat. (The tone of this batch of extras, as will probably be inferred, is actually pretty sombre.) The sub-menu Stories from Star Trek VI houses several mini-docs, starting, appropriately, with "It Started With a Story" (10 mins.), wherein The Final Frontier screenwriter David Loughery discusses Star Trek: The First Adventure, a prequel project quashed by Paramount (leading to the departure of producer Harve Bennett, declining interview for the first time in this DVD series), who didn't want to celebrate the then-25th anniversary of their most lucrative property with a film starring unknowns. Lest Meyer go a whole featurette without making a boast, he claims here to have been the first person to get e-mail; lest Shatner go a whole featurette without resurrecting a grudge, "I would like to have seen more agonizing [from Kirk] about retirement," he moans. How right he is, though.

"Prejudice" (5 mins.) recalls Gene Roddenberry's hatred of the script for the sixth installment: both he and Shatner felt it turned the crew of the Enterprise into causeless bigots. Shatner remains bitter that Meyer broke a promise to retract Kirk's line "Let them die," but that doesn't quite hammer home the cast's aversion to the screenplay like Meyer's memory of African-American Brock Peters (To Kill a Mockingbird's Tom Robinson) choking on the "repugnant" words of an anti-Klingon monologue. "Director Nicholas Meyer" (6 mins.) is a somewhat guarded tribute to the auteur in which cinematographer Hiro Narita claims that Meyer often quoted Shakespeare on set to wriggle free from answering an actor's question, a theme that continues in "Shakespeare and General Chang" (6 mins.). The informative "Bringing It to Life" (23 mins.) reveals Meyer's subtle alterations to the design of the Enterprise in his sophomore turn at the helm (such as the narrowing of its corridors to increase claustrophobic tension), as well as his promise to pay $20 for every bite the actors took of their blue Klingon food--Shatner chowed down and collected, too, from "that lying director." Rounding out this section is "Farewell & Goodbye" (7 mins.), a reflection on shooting The Undiscovered Country's bittersweet coda--something Shatner invested "with the colours of Peter Pan."

Getting The Star Trek Universe underway is "Conversations with Nicholas Meyer" (9 mins.). Here, Meyer compares filmmaking to running away to join the circus and exposes Oedipal virulence with an idle threat to "punch [my mother] out." He even quotes Dirty Dancing's Jennifer Grey with a reverence usually reserved for the topic of Stravinsky. "Klingons: Conjuring the Legend" (21 mins.) is redundant in light of Klingon philologian Marc Okrand's lesson in the geek dialect on the Search for Spock DVD, though Plummer divulges his character's debt to eyepatched Israelite Moshe Dayan, complicating one's interpretation of Chang as a yellowface caricature. "Federation Operatives" (5 mins.) takes inventory of The Undiscovered Country cast members with experience in other incarnations of Star Trek while "Penny's Toy Box" (6 mins.) takes inventory of the prop warehouse run by Paramount archivist Penny Juday. Lastly, "Together Again" (5 mins.) touches on Shatner and Plummer's Stratford days, when the former understudied the latter in a stage production of "Henry V".

Farewell bids proper goodbye to a beloved Trek regular ("DeForest Kelley: A Tribute" (13 mins.)) in a moving piece that encompasses Kelley's Hollywood Walk of Fame ceremony and his gracious acceptance of the "Golden Boot Award" for a bygone career as the heavy in B-westerns. "Dee"'s warm reputation is not challenged by his "Original Interviews" segment; Shatner, Nimoy, Nichols, Takei, Koenig, and Iman also appear in vintage talking-heads, Iman with her yellow contacts in. Though Promotional Material contains the teaser and theatrical trailers (plus a pompous, 5-minute "1991 Convention Presentation by Nicholas Meyer"), behind-the-scenes stills--along with four storyboard galleries, the last of which belongs to an omitted sequence--fall under Archives. Paramount mysteriously replaces their customary grey keepcase with a white one for this latest collectible Trek. Originally published: January 27, 2004.

*For a film preaching racial harmony, that, in addition to its many homages, is a parallel for the collapse of the Berlin Wall, it seems reckless to plant the seed of Yellow Peril in the Klingon empire in the form of Chang, whether or not China's Communist establishment corresponds with the metaphorical view of Klingons as Russians. Chang's heritage might be up for debate if Plummer didn't appear to be bursting a blood vessel to keep from saying, "Aaaaah, soooooo." return

Also, there is a marked decrease in sexy fan dances with this entry. And there are exactly *zero* gigantic floating heads that shoot lightning-bolts out of their eyeballs. Man, they really back-pedaled on this one, huh?