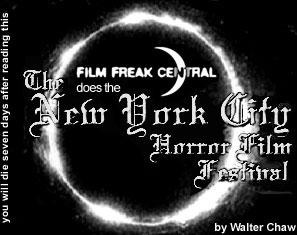 November 5, 2003|Held at the Tribeca Theater for the second year in a row, the New York City Horror Film Festival (NYCHFF) is a collection of low-budget feature and short genre films that, like the San Francisco Film Society's lamented Dark Wave festival (after two amazing years, there is no third instalment pending), gives weight to a much-deserved critical re-evaluation of horror film as an important artistic, sociological, academic endeavour. With special awards this year honouring Troma's Lloyd Kaufman, underestimated horror director Stuart Gordon, drive-in movie critic Joe Bob Briggs, my favourite independent horror director Larry Fessenden, and special effects legend Tom Savini, the 2nd NYCHFF is an emerging niche festival run by folks who care about the genre and, better, have an idea about how to present the material in a way as enthusiastic as it is savvy.

It's the small festivals with the small films like the NYCHFF that remind FILM FREAK CENTRAL of why we started up in the first place: the chance to see great movies that may never find a major release, to speak with people at the top of a field too few respect as valuable, and to discover environments where film, particularly the horror film, is seen as something other than cheap and exploitive. I have theories about horror and they involve Jung and the belief that as a genre it represents something of an "indicator species": the rawest, fastest throughline into the proximate collective unconscious, horror pictures were the first to discuss the Red Scare, the Cold War, Watts, Vietnam, and Kent State. (As, likewise, were the first films to talk about school shootings and 9/11.) So what the NYCHFF represents is a showcase for this moment in our national psychology. Not to say that every film is a winner, just to say that as small festivals go, NYCHFF may ultimately be the only showcase for something important.

As the four-day fest wraps up its second edition, the awards and their innovative prize packages went to a couple of choices that I wouldn't have made, but there you have it. The prurient chills of Flesh for the Beast, in particular, I didn't care for too much, while the cinematography for Malevolence seems head and shoulders above the competition. A better choice for feature would have been the harrowing Savage Island--and as for the audience's choice of Strange Things Happen at Sundown, I'm guessing it's a regional thing.

SAVAGE ISLAND (Jeffry Lando)
An at times fascinating redux of Wes Craven's The Hills Have Eyes, Jeffry Scott Lando's Savage Island deals with the problem of the middle class intruding on the demesne of primal man: digging plots on prime moonshine acreage, desecrating woodland gravesites, and working out their petty marital squalls against the backdrop of struggles for survival and the instinct to progeny. That it was shot in terrible-looking digital video works in its favour, as even the format speaks, like The Blair Witch Project, to the sort of arrogance that technology breeds--forgetfulness of the savage immediacy of the Natural just on the borders of civilization and superego. (The tragic effect of a cell phone and its subsequent execution is surprisingly smart and surprisingly piquant.) Its acting forever on the verge of embarrassing, its locations "found," Savage Island also reminds of the zero-budget frights of the Seventies in its ability to evoke a feeling of irreducible filth and a bone-deep discomfort. It works because it doesn't aspire to be much more than a straight reworking of the Deliverance dynamic; the logic of people defending their homes and aspiring for eternity through children (the child peril lifted almost whole from the Craven film) and the idea of families at war with one another over land and litter remain ever vital. Handled with the disarming immediacy of DV, Savage Island deserves to be respected as a statement about man, culture, and how they don't often make 'em like they used to. ***/****

LITTLE ERIN MERRYWEATHER (David Morwick)
Michael Civille and David Morwick's Little Erin Merryweather is the kind of film that you feel bad for trashing because the intentions are so obviously well-intended: "Why not make a(nother) slasher variation on "Little Red Riding Hood"?" is not a bad question in of itself. But when one seeks to fashion what is possibly the most Freudian-ly exhausted fairy tale into a picture (see also: Freeway, The Company of Wolves, Deep in the Woods, and so on), best to work a little harder on atmosphere and script. Peter (and the wolf, get it?), played by outmatched neo-Christopher Atkins cipher Morwick (co-director, also screenwriter), is a student at a small liberal arts college who, Murder 101-like (Copycat-like), goes to lectures about serial killers and true crime before finding himself embroiled in a real-live serial-killer intrigue. The titular fatale (Vigdis Anholt) is an imploding librarian with Leda-like aspirations to act out the Red Riding Hood myth as it's originally written, stones sewn in the poor wolf's gullet and all. The identity of the killer never in question, the murders tastefully off-screen, the pacing slack and enervating, and the performances and script flat and unconvincing, what works are a few camera set-ups now and again--a hand on a screen door in extreme foreground particularly nice. Now if Civille and Morwick could find a writer and a cast, they'd be in business. */****

KING OF THE ANTS (Stuart Gordon)
Less on the radar screen since his amazing splatterhouse classic Re-Animator (1985) (a trio of ill-conceived space operas at least partially to blame (Robot Jox, Fortress, Space Truckers) for that), Stuart Gordon is probably at his best adapting H.P. Lovecraft's impenetrable tales of the Cthulhu Mythos to celluloid half-life. After Re-Animator is the agreeably unpleasant From Beyond and, most recently, the underseen and vastly underrated Dagon, all three of which boast of the sort of nihilism that makes audiences and distributors extremely uncomfortable, and none of which is shy about the level of gore and nudity necessary to make them as transgressive as only good horror can be. With King of the Ants, Gordon steps sidewise into noir of the Jim Harrison/Donald Westlake variety: sun-drenched, dusty, and infused with the grotesquerie of primal human politics. Its tale of the prototypical drifter (Chris McKenna) given direction in his directionless life by the carnal/economical correctness of murder-for-hire, is handled by Gordon as the hero's journey (from call to action to seductress to belly of the beast to, finally, a rebirth into the role of tarnished hero), providing along the way his requisite bounty of gore, nudity, and hopelessness. The drifter's casual manifesto ("It's what I do") is chilling in its blasé opacity, while Daniel Baldwin, Kari Wuhrer, Ron Livingston, and George Wendt (who brought the Charlie Higson novel upon which the film is based to Gordon many moons ago) lend the supporting roles a surprising weight. Darker than pitch and unusually effective in showcasing the brutality and ugliness of murder, King of the Ants is uncompromising and in all likelihood unreleasable--and worth the effort as an antidote to mass-marketed mayhem-without-consequence. ***/****

STRANGE THINGS HAPPEN AT SUNDOWN (Marc Fratto)
Gore and sleaze rule the day in Marc Fratto's fitfully, self-consciously entertaining ode to Pulp Fiction, recasting Quentin Tarantino's smooth criminals as Brooklyn-ese spouting goombahs. A crime intrigue involving some embezzled cash mixes uneasily with subplots involving a "fixer" and the usual suspects, pop culture-spouting mouthpieces for dialogue cranked a couple ratchets above "clever" clear on into the realm of "distracting" and unbearable. The jokes uneven, the presentation gauche and ugly, a climactic blood orgy sports some nice low-fi grue effects but lore is handled too cavalierly: part Anne Rice, part traditional, it's all tied together with a sense of whimsy that, ultimately, undermines anything like the kind of internal consistency that would make for compelling viewing. */****

IN MY SKIN (Marina De Van)
Nigh unwatchable for the extremes of discomfort it provokes, Marina De Van's remarkable In My Skin is an attack on convention startling for its audacity. It reminds of a religious David Cronenberg, laying obeisance at the altar of the body and the self while laying waste to social mores with the efficiency of a reaper's scythe. The title phrase suggests a state of being and a discomfort, the idea that the skin is a shell that obscures, and, indeed, Esther (De Van, a triple-threat who also wrote the screenplay) chews away at her covering to get to some sort of purity. The idea of using cannibalism (auto-cannibalism in this case) as a metaphor for human behaviour is a good one, used in a way here to debride the banal façade of social intercourse in the same way that Claire Denis's Trouble Every Day strips away the manners of sexual intercourse. Esther wounds her leg badly at a party, doesn't know it for hours, and decides that she sort of digs it; so begins a slide into hallucination and deviancy as she indulges in self-mutilation (really, self-mortification) before taking the host, the blood and flesh, of herself. Mass as an allegory for the worship of some greater self, made manifest in a perverse way in Esther's profession of marketing consultant, In My Skin finds sublimity in an indescribably surreal dinner scene and in its extended, wordless finale that rivals Repulsion for squirm-inducing aberration. Perverse and revelatory, In My Skin is difficult viewing under any circumstance, but like Trouble Every Day (and Audition), it cuts into the underbelly of human behaviour with a mortician's precision. ***½/****

FLESH FOR THE BEAST (Terry West)
Exploitation cinema on no budget shot on a surprisingly nice looking digital video, soft-porn knock-off king Terry West's Flesh for the Beast boasts of ample amounts of gore and acres of nubile succubus flesh, all wrapped in what appears to be a rant against a mankind that would first turn girls to prostitution, then take advantage of their zombies in a set of vaguely titillating scenarios. A group of parapsychologists are invited to a haunted brothel by an eccentric millionaire who doesn't talk like anyone ever would or has. The dialogue is a problem, the acting an even bigger one, but there's nothing wrong with the abundance of nudity and gore--shame that it's not attached to anything resembling sexuality, tension, or fear. Modeled on The Haunting, and playing like any number of unsuccessful films modeled on The Haunting, Flesh of the Beast is sunk primarily by an unusually awful performance by Jane Scarlett as the requisite wooden virgin medium. Meanwhile, the idea that men are all rapists, fully-clothed premature ejaculators with mean streaks, and deserving of their disembowelments at the claws of sexy, full-frontal she-demons is certainly interesting, if reductive and nothing new. That all the characters are named after horror writers is just one of those things that hasn't been clever since The Howling. Still, the picture gets a little credit for being this unapologetically objectionable: a scene where three naked, blood-soaked women fight over entrails to the cool strains of a wah-wah electric guitar is so ridiculous, so ridiculously puerile, that it plays, like the rest of the picture, as something of a lowbrow cheeseball riot. **½/****