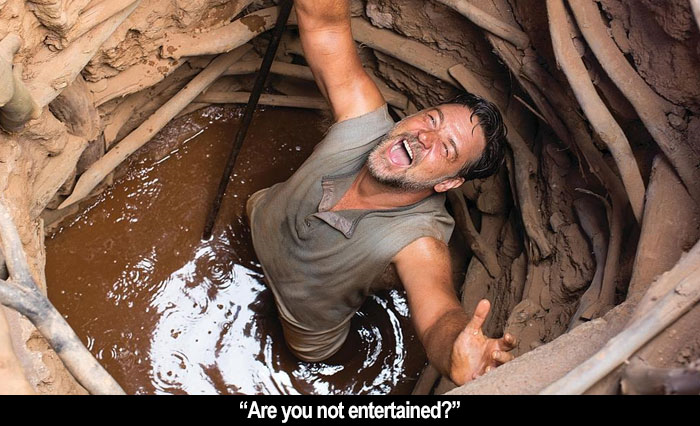 by Walter Chaw The Water Diviner is premium schmaltz. Connoisseurs of such will find its top-shelf qualities to include a Witness-like star-cross'd pas de deux; dead wives and sons; surrogate wives and sons; surrogate father figures fighting, Footloose-like, against oppressive cultures; a Fisher King rescue from insanity; and enough war-movie boilerplate to choke a War Horse. Its direct antecedent is of course Peter Weir's Gallipoli, except that Gallipoli is something of a masterpiece that balances its war journal with strong characters and a tragic ending in keeping with its grim subject matter. The Water Diviner, on the contrary, is a bodice-ripper chock-a-block with hole-digging and sky-beseeching, along with an Outback dust-storm that points, if the trailers for Mad Max: Fury Road are any indication, to this year's most inexplicable evidence of zeitgeist. 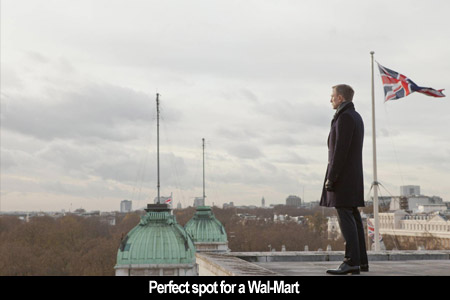 by Walter Chaw For me, the James Bond films are the literalization of a very particular Conservative fantasy in which a suave, quippy, emotionally-arrested sociopath battles Cold War foes, beds beautiful women without consequence, always has the latest technology, and engages in the endless murder of foreigners. Just suggesting a "license to kill" reveals a certain level of arrogance; and it's their confrontation of the noisome wake left by those attitudes that makes On Her Majesty's Secret Service and the more recent Casino Royale the powerhouses that they are. Skyfall, the latest in the decades-spanning series, tries but fails to do the same. A good part of the problem can be traced back to non-action director Sam Mendes (superseding Marc Forster, non-action director of the disastrous Quantum of Solace), who, in trying to honour the visceral requirements of the genre, finds himself unable to produce either a meaty melodrama or a capable action vehicle.

by Walter Chaw The first thing you notice about Whiteout is that it looks like shit. Though it was shot on location in Manitoba (subbing for Antarctica), they could've saved everyone the trouble and shot it in a green warehouse for all that anything in the film resembles anywhere outside. Not unreal, merely artificial. Take the moment, for example, when unbelievably-hot U.S. Marshal Carrie Stetko (Kate Beckinsale) and cohort Dr. John Fury (Tom Skerritt, well into the Kris Kristofferson portion of his career) discover the body that will be the centre of their stupid investigation into the film's stupid mystery. The middle of an ice canyon, it looks more like something out of a Quatermass flick, sixty years old on a shoestring, and it only gets worse when we come to sepia-toned flashbacks trying to explain why Stetko is damaged goods and, therefore, hiding from herself at the bottom of the world. Everything seems to have been manufactured in a mainframe--even the performances. It's Sky Captain and the World of Tomorrow, and, brother, that ain't good for something trying hard at edgy realism. 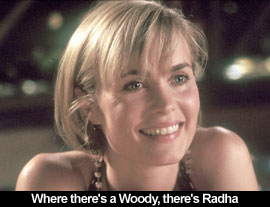 by Walter Chaw An unintentionally creepy, relentlessly political diatribe, Turkish director Handan Ipekçi's Hejar intends to tell the plight of the minority Kurdish--who aren't even allowed to speak their own language--in Turkey, through the deep-set eyes of a little girl orphaned by the majority's inhumanity to the Kurd downtrodden. Sort of like The Professional with an aging barrister in place of a highly-trained assassin, or The Omen and The Exorcist (complete with a bizarre semi-public carpet urination) in its startling musical stings and unmotivated subjective camera angles, Hejar is an over-scored, over-directed, and over-acted mish-mash of accidental implications and staid formula reiterations. When the parents of the frankly terrifying Kurdish kid Hejar (Dilan Erçetin) are murdered by overzealous Turkish cops, the cranky elderly lawyer Rifat (Sükran Güngör) takes her in, their type of subsequent bonding handled with a good deal more grace (and a good deal less proselytizing) in Jan Sverák's Kolya. When a Marlo Thomas hat functions as the Miracle Worker moment in which stubborn Hejar begins to learn the Turkish language that might save her from the murderous ruling class, I got up for a glass of water and a cold compress. An endlessly repetitive allegorical journey meant to illuminate the ways in which language defines ethnicity while waxing rhapsodic about the trials of being a glowering demon spawn, Hejar is memorable for the myriad ways in which filmmaking techniques can be misused to disastrous effect, and how a bad movie is sometimes forgiven its sins for being foreign and starring a supposedly cute child.