by Walter Chaw Canadian expat Rob Jabbaz has had it. His hyphenate debut The Sadness is one of the bleakest, angriest films I've seen in a long time, made rarer still by being carried off with obvious chops. Its focus is to unequivocally cut through the bullshit of this, our shitty timeline. The first real conversation of the film is between our hero, Jun (Berant Zhu), and his neighbour across adjoining balconies, concerning how a virus causing some doctors concern is a hoax perpetrated by big business and the media. A talk-show host in the background speaks over a virologist who warns of the potentially world-ending evil of politicizing a pandemic, and...well, you get the picture. The scariest thing about The Sadness--a very scary picture--is that it's the product of a Canadian filmmaker working in Taiwan, which confirms that Trump is a symptom not the cause of whatever the good fuck is wrong with us. In my darker moments, I like to say that we're just monkeys in clothes, and every minute we're not killing each other over protein and access to women is a miracle. The premise of The Sadness is a thought exercise in ironic magnification, one where you make the point by exaggerating the scenario slightly. The premise of The Sadness is that we're all monkeys in clothes, and imagine if we stopped pretending that we aren't.

TIFF '20: Get the Hell Out; Nomadland; David Byrne's American Utopia

by Bill Chambers Have the ticking time bombs the world is sitting on and TIFF's significantly reduced slate resulted in the 2020 iteration of the festival--the COVID-19 TIFF, the pre-election TIFF, the world's-on-fire TIFF--being programmed with increased political fervour? Three of the four films I've so far watched at TIFF 2020 suggest that's the case in their topicality, though I will allow that the silliest of these, Taiwan's Get the Hell Out, would not resonate nearly as much as it does were it not for these unremovable pandemic goggles I wear now, which transform everything old and new into ironic commentary on this moment in history. Get the Hell Out begins in medias res after a (sigh/jerk-off motion) zombie outbreak in parliament, then backtracks to show how the headstrong Hsiung (Megan Lai) was literally muscled out of office for refusing to endorse a chemical plant that will contaminate the environment with the rabies virus. She manipulates a lovestruck security guard with chronic--and portentous--nosebleeds named Wang (Bruce Ho) into running in her place, hoping to use him as a sock-puppet against her misogynistic former colleagues. Alas, he has his own cock-eyed agenda, and so the plague proceeds apace. Trapped in the parliament building, Hsiung and Wang are forced to fend off hordes of cannibalistic MPs as well as their nefarious rival, Li (Chung-wang Wang), the movie's nominal Trump stand-in. 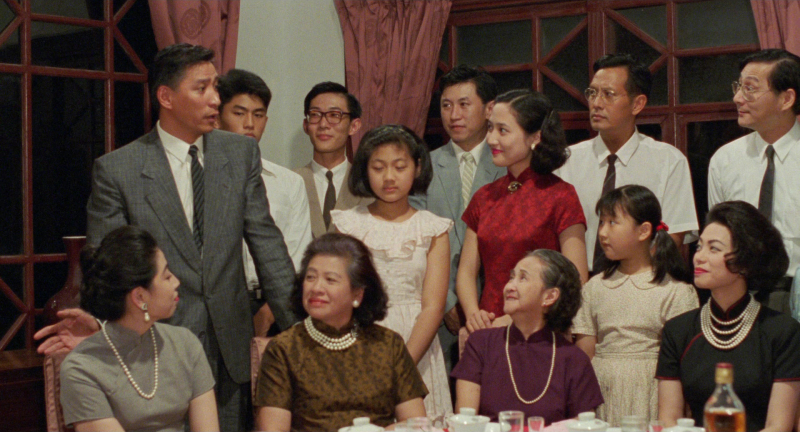 by Walter Chaw My family fled mainland China to Taiwan in 1949, just ahead of the communist takeover. My grandfather on my mother's side, a member of the Chinese military, asked his aide to fill out the paperwork necessary for their emigration. In his haste, the kids were given sequential birth dates (1, 2, 3, 4, 5...) to expedite completion of the forms so they could get on with their flight. My uncle, Fu Kun-Ning, was born on January 7, 1941, though his official identification documents say something different. I think he probably liked the chaos, the mystery represented by that discrepancy--he was nobody's man but his own. He died on March 1, 2007, when I was 33. I hadn't spent much time with him over the course of my life. I was quickly and irrevocably estranged from my family and my heritage, as are many Chinese-Americans born here to immigrant parents. I barely said anything to my own parents for thirty years. There was one visit, though, where I had a formative conversation with said uncle. He asked me what I was interested in and, ashamed to tell him the truth, I told him I wanted to be a biochemical engineer, the major I went into my first semester of college having declared. 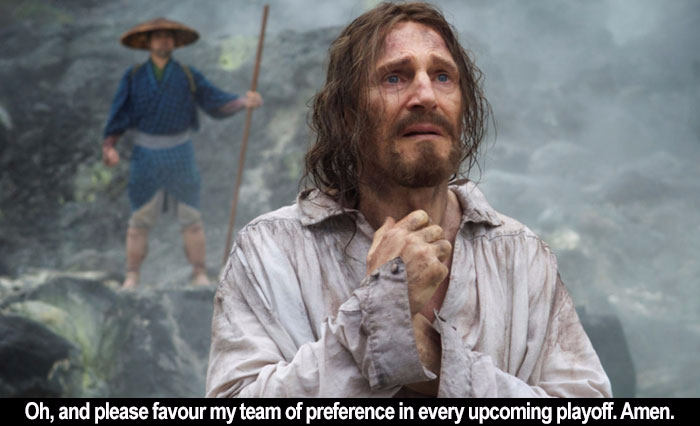 by Walter Chaw Martin Scorsese's Silence is Martin Scorsese's Silence. Not Shusaku Endo's Silence. Not Masahiro Shinoda's Chinmoku. Rather than a Japanese perspective, it's told from the perspective of our most notoriously Catholic filmmaker (next to Mel Gibson, but he went to a different church), who, at the end of his life, has found this cap to a trilogy about faith and doubt begun in The Last Temptation of Christ (an adaptation of a novel by Greek author) and Kundun (about the life of the Dalai Lama)--films, each, that explore mystery and land somewhere personal and inherently unknowable, as faith is and should be. It's an essentially Romanticist text, not Humanist like Endo's or doom-laden and progressive like Shinoda's. It's the closest Scorsese's come to truly contemplative since Kundun, and it shares with that film a sense of wonder at the Natural: this Romanticist conceit that the first testament of God is, as it always has been, Nature. Silence is almost a Terrence Malick film in that sense. In every other, it's Scorsese coming to terms with the idea that grace is made manifest only through the actions of its proponents. The title refers not just to the Christian God's notable state when confronted with the unimaginable suffering of His children, but also to Scorsese's own idea of what God wants from His followers. It's not thoughts and prayers in the face of tragedy. Maybe it's humility. Maybe it's service. Or maybe it's just silence..

by Bill Chambers Joshua Oppenheimer's The Act of Killing is devastating because it doesn't offer any moral opposition to the glibly boastful first-hand accounts of Indonesian death squads; and his The Look of Silence is devastating because it does. A B-side to The Act of Killing but no mere Blue in the Face afterthought, The Look of Silence follows Adi, a 44-year-old door-to-door optometrist whose senile father is 103 and whose mother improbably claims to be around the same age. The father has forgotten but the mother has not that Adi was preceded by a brother, Ramli, who was killed during the "communist" purge (the picture reiterates that anyone who didn't immediately fall in line with the military dictatorship was tarred with the same brush, regardless of political or religious affiliation)--though "killed" somehow undersells his execution, a two-day ordeal that culminated in Ramli's castration. Adi watches Oppenheimer's footage of the murderers describing his brother's death in that animated, kids-playing way familiar from The Act of Killing, though these are not the same two "actors" who appeared in that film, underscoring that a desensitization to the atrocities committed has happened on a national, not individual, scale.

by Bill Chambers Blessed with an achingly beautiful score by Alexandre Desplat, Ang Lee's Lust, Caution is a more tasteful Blackbook, which is odd considering how much more graphic it is in its depiction of not just sexuality but, thanks to a darkly-comic homage to Torn Curtain, violence as well. Where Blackbook director Paul Verhoeven is a vulgarian, though, Lee projects civility and cultivation. That's how he so often manages to shank you. The affair between secret-service man Mr. Yee (Tony Leung Chiu Wai, never viler) and a young freedom fighter masquerading as a Mahjong-playing housewife (the incandescent Tang Wei) in pre-revolutionary Shanghai plays out in an interminable series of rape scenarios from which Lee never flinches, fostering an impression of artistic integrity that Lee has been only too happy to perpetuate by blithely accepting the MPAA's ruling of an NC-17 rating for the film. Alas, post-Brokeback Mountain, the intensity of the In the Realm of the Senses-style sex scenes is too conspicuous for its own good, prompting extratextual questions about Lee's motives. Friend and colleague Norman Wilner said something in passing that really got me thinking: that he would feel like Lee is rhetorically asking us, "Is this what you wanted from Brokeback?" had he more faith in Lee's intellect. At any rate, in light of the sheepishness of Brokeback Mountain's same-sex encounters, the gratuitousness of Lust, Caution's hetero liaisons does strike a note of methinks the lady doth protest too much. Yet the picture gets around to honouring its pretensions towards truthfulness in a climax that exposes the sham of Blackbook's romantic sacrifices and narrow escapes (Mata Hari will always face down a firing squad), even if it's only later, at home in the dark, that the full weight of Lust, Caution's misanthropy comes crashing down on you. If Lee is ultimately too prosaic to ever be anything but a great middlebrow filmmaker, consider what an oxymoron that is; we're lucky to have him. PROGRAMME: Special Presentations 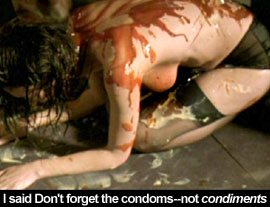 Hot Docs '03: How High is the Mountain + How Deep is the Ocean

HOW HIGH IS THE MOUNTAIN
***/****
directed by Shiang-Chu Tang

by Travis Mackenzie Hoover These are two tangentially related films by the Taiwanese director Shiang-Chu Tang, and they're like nothing else in the Hot Docs festival. They're neither as overly schematic as so many socially-minded documentaries nor overly aestheticized like the school of Errol Morris. In fact, those poles don't really apply to these films, which record social processes through the examples of individuals and which have a formal beauty to them that is totally non-coercive. Watching them, you don't feel forced into taking a stance--you are provided with the stuff of peoples' lives to draw your own conclusions as to how they ended up the way they did.

Continue reading "Hot Docs '03: How High is the Mountain + How Deep is the Ocean" »

by Walter Chaw The pivotal scene in Wang Xiaoshuai's Beijing Bicycle comes near the end: a gang of young toughs is chasing a country boy and a city boy through a sprawling labyrinth of houses in a questionable section of Beijing; one says to the other, "What are you doing? This doesn't concern you." The other replies, "I don't know my way out." Beijing Bicycle is a sparsely-written allegory of political oppression that has the visual style of an early Beat Takeshi film and the poetic reticence of the Chinese people. It is more about looks than speeches, pauses than action--and the degree to which each character finds its voice speaks volumes as to the level of self-sufficiency and freedom that each character possesses.