by Walter Chaw A barometer of our culture--an exploding western world balanced between listless fatalism on the one side and violent nihilism on the other (Elephant and Young Adam vs. Walking Tall, The Passion of the Christ, and Man on Fire)--at this exact moment in time, long-time blockbuster scribe Jonathan Hensleigh's hyphenate debut is his adaptation of Marvel Comics' vigilante title The Punisher. With the possible exception of Mel Gibson's ode to sadism, this is the year's most irredeemable picture thus far, but it's elevated by a bracing idea, an astonishingly courageous idea: that its hero and villain are equally reprehensible, and, by extension, that both of them do what they do because in their psychotic haze, the only thing they have to tie them to any kind of illusion of equilibrium is the dangerous idealization of their families. When a picture like this appears in the middle of a glut of vigilante flicks and in the middle of a society that may have been led into a predictably cruel and bloody war on the basis of a personal grudge, one forgiven by many for its specious association with a collective insult to our illusion of sanctuary, people should prick up their ears. While The Punisher may not be a particularly good film, it is a particularly important one.

ONCE UPON A TIME IN MEXICO
*½/**** Image A Sound A- Extras A
starring Antonio Banderas, Salma Hayek, Johnny Depp, Rubén Blades
written and directed by Robert Rodriguez 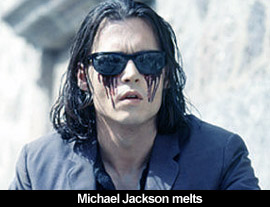 by Walter Chaw Ferociously patriotic but lacking in the epic scope suggested by its obvious debt to Sergio Leone's late masterpieces, pastiche-meister Robert Rodriguez's Once Upon a Time in Mexico is a magnification of John Woo in a lot of the same ways that Woo was a magnification of Leone--a post-post modern exercise bound together with a compelling sense of style but an alarming dearth of even the basics of sense. At the same time, if Leone understood the raucous humanism at the heart of Kurosawa, and Woo the insolent demystification of genre archetype of Leone, Rodriguez seems mainly to have ported the puerile macho fantasy of Woo while glancing off the deeper well of questions of honour and the mysterious bond between killers of men. I'm beginning to think that Rodriguez is a cheap filmmaker, interested in the mechanics of a piece more than the motivations of them. He can shoot a mean picture, he just can't set it up, pay it off, or explain it--and in replicating the best shoot-outs of Woo and Leone, he demonstrates that he's no Woo and most definitely no Leone.

by Walter Chaw So try this one on for size: a woman wronged by a world of evil men recuperates, studiously fails to call the police (too many men on the police force--men=bad; we'll be returning to this equation often), and finally tracks down her tormentors with the express purpose of murdering them. This not only describes Michael Apted's Enough, but also Meir Zarchi's infamous exploitation flick I Spit on Your Grave, the main difference between the two being that Enough tries very hard to hide the fact that it's an ugly bit of repugnant vigilantism masquerading as a feminist uplift drama.

BAISE-MOI (2000)
Rape Me
Fuck Me
*½/****
starring Raffaëla Anderson, Karen Bach
written and directed by Virginie Despentes and Coralie Trinh Thi, based on the novel by Despentes

by Bill Chambers An authority figure delivers the definitive line of dialogue of Bully, Larry Clark's quasi-sequel to his own hotly-contested Kids: "I don't know what you're up to. I don't think I want to know." Well, Clark insists on letting us know. Often accused, even with only three motion pictures under his belt, of over-sensationalizing already sensational material, he's hardly the next Oliver Stone. He may be something of an interfering observer, but he's not a conspiracy proselytizer running with scissors down the hallway. Where Stone drew slave parallels to football in Any Given Sunday by intercutting clips from Ben-Hur, Clark makes more organic shock statements. He can be tactless, sure. Can't we all?

by Bill Chambers One's great, the other ain't, and that's the truth, Ruth. Revenge of the Nerds, too often lumped in with the T&A comedies that flanked its theatrical release (Up the Creek, Porky's Revenge, et al.), is a cinematic gem of exemplary construction--one of the best, most empathetic teen movies with which John Hughes was not affiliated. Revenge of the Nerds II: Nerds in Paradise, alas, sequelizes the trashy rep of its predecessor rather than the reality.