Sundance '20: Yalda, A Night for Forgiveness

by Walter Chaw About 20 minutes into Massoud Bakhshi's shrill Yalda, A Night for Forgiveness (hereafter Yalda), I put my hands over my ears to blunt the constant keening. It's also the point where I started wondering what this film was on about. There's something brilliant and fascinating at the core of Yalda--a movie about an Iranian variety/game show in which the fate of someone sentenced to death hangs on the forgiveness of one of the people they've wronged--that makes its hamfistedness a real pity. Gathered are what we might call the plaintiff and the defendant to sit in an "Ellen"-style talk-show nook to tell their stories and air their grievances and then let the audience deliver a verdict via text message, whether or not a blood-money bounty will be paid to the aggrieved should they decide to exercise some grace. That's horrible. It's not more horrible than the U.S. justice system, which offers no such opportunity of recourse for the accused (heaven forbid a Christian nation ever exercise forgiveness and actually value life), but it's horrible just the same. 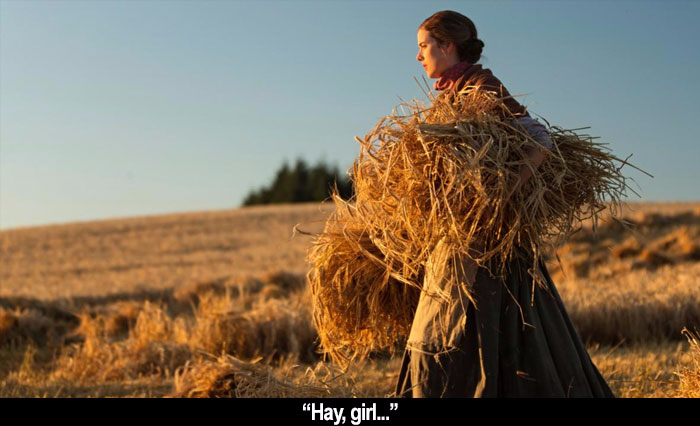 by Angelo Muredda If ever a film deserved to close with not a modest writing credit but an ostentatious "Adapted by," it's Terence Davies's Sunset Song, a characteristically moving and plaintive take on Lewis Grassic Gibbon's 1932 novel about a young woman riding out the turbulent waves of turn-of-the-century Scotland. Davies has now logged more adaptations than autobiographical works, but it's frivolous to guess which strand of his filmography is the more personal, given the way he infuses even the most cobwebbed Great Book with his signature melancholy. For all its literary pretensions, Sunset Song is as steeped in domestic, regional, and national reminiscence--both fond and tortured--as Davies's most ostensibly intimate works, like his acerbic but loving first-person ode to Liverpool Of Time and the City. And though it will surely be deemed minor by some because of its muted register (compared to the more rapturous aesthetic of The Deep Blue Sea), the film is, in its more understated way, as resonant and gutting a statement as any Davies has made about how living means being in thrall to the past.

by Walter Chaw Broad, earnest, unassuming animation from France, Ernest & Celestine is the tale of a little girl mouse, Celestine (voice of Pauline Brunner), and gruff bear Ernest (Lambert Wilson), who overcome their cultural prejudices to become fast friends. Celestine is outcast because she'd like to be an artist instead of a dentist; Ernest is outcast because he's a busker struggling to eke out a subsistence living. Over a series of misadventures, the two end up doing the Badlands in Ernest's ramshackle hideaway, awaiting their fate and trying to enjoy their borrowed time. It's all leading to a grim ending, but it's not that kind of movie.

by Walter Chaw Though a perfectly serviceable actioner, one that avoids almost every pitfall and cliché of the POW genre while supporting a singularly eccentric performance, Werner Herzog's Rescue Dawn, sadly, could have been directed by any one of a dozen directors. Gripping but not especially memorable, it lacks the mad Bavarian's insanity: his belief that nature is obscene, as well as his ability to make a trance from the mendacity of routine. (Because Herzog is a rare talent, his films butt up against greater expectations.) The irony of this being Herzog's most accessible film is that it's still probably best appreciated by Herzog fans, who will note--besides the obvious link to Herzog's Little Dieter Needs to Fly--an early moment where a sadistic Laotian guerrilla regards a giant butterfly on his arm like Kinski in B-roll for Fitzcarraldo. German-born Dieter Dengler is brought to life in Rescue Dawn as a bizarre pastiche of nervous tics and unrestrained energy by Christian Bale (the most impressive Method actor in Hollywood who still manages to leave no lasting impression whatsoever). Here Dieter, after getting shot down over Laos on a covert bombing run early in the Vietnam War, serves as leader to--and inspiration for--a group of prisoners-of-war closed off somewhere in the lush South Asian jungle. If it's meant as a continuation of Herzog's interest in blurring the lines between fiction and documentary, consider that Little Dieter Needs to Fly is already a near-perfect example of that particular auteurist concern, with even recent Herzogs like Grizzly Man addressing the same issues (and others, such as the horror of the Natural and the futility of man's struggle to transcend) with more subtlety, tragedy, and wit. Exactly no more and no less than what it is, Rescue Dawn is a Vietnam flick without a discernible political agenda; another opportunity for Jeremy Davies to act like a paranoid, emaciated junkie; and another chance for Steve Zahn to cement his second-banana status. There is one moment, however, that sings with poetry, as Dengler hallucinates a lost buddy and offers him the tattered sole of a shoe they'd been sharing through the wilderness. It's Herzog peeking through a canopy of expert nullity. 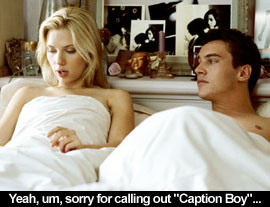 by Walter Chaw Match Point is a quasi-Patricia Highsmith flick about a rudderless Ripley cruising like a shark amongst England's polite society, and the extent to which it works has to do with the degree to which its philosophy of chance and living with ghosts attaches itself to the zeitgeist. The picture opens with a shot of a tennis ball lobbed low and in slow-motion into the top of a net, an image that has as its echo a key moment where a wedding ring tossed towards a river rebounds against a fence into the street. The voiceover talks about the common fear that our lives are governed by happenstance and entropy, transforming the ball going forward into a metaphor for winning--and back into one for losing. Using this as gospel, it's interesting to wonder what it means that, when push comes to shove, our hero's victory is defined by his defeat. Match Point is Woody Allen's best film in some time, which is a left-handed compliment at best; better to say that it's another decent millennial fable about class, the vicissitudes of fate, the reptilian hunger of infiltrating the social strata, and living with ghosts.

WILLIAM SHAKESPEARE'S THE MERCHANT OF VENICE
*½/**** Image A Sound A Extras B+
starring Al Pacino, Jeremy Irons, Joseph Fiennes, Lynn Collins
screenplay by Michael Radford, based on the play by William Shakespeare
directed by Michael Radford 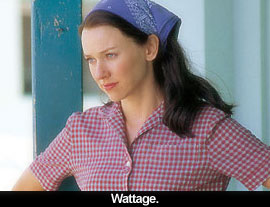 by Walter Chaw As we comb through the continuing fallout of the Bush Jr. administration's first term, themes begin to assert themselves on our movie screens as clear as the words of prophets written on tenement halls. Colorized misogyny and race-baiting spectacles share time with protest pictures that are oftentimes more strident and dogmatic than the party line--it's the Eighties neo-Cleavers at war with postmodern B-pulpers, which many moons ago manifested themselves as one of the most fertile periods in the history of science-fiction and now resurface as part of a new wave of existential science-fiction. We're all about Blade Runner these days, deep into Philip K. Dick territory where memories and dreams are manipulated and franchised for you dirt-cheap. Images have become the jealous currency traded in the underground of a land where one sad breast was flashed in the middle of our annual orgy of violence, sex (sometimes incestual, lesbian sex as sold by primogenetic neocon Pete Coors--"And twins!"), and unrestrained plea for/rewarding of mass consumption. It was enough to send my beloved nation's vocal demographic of selectively pious idiots into paroxysms of...what? Outrage? Righteousness? I don't know. What I do know is that in the United States, it ain't the suggestion of sex, it's the actual, pale, flaccid appendage that feeds the sometimes-joyous result of sex that offends. Women need to be protected from showing the outsides of their bodies in the same way they need to be protected from having a say in what happens to the insides of their bodies in the same way they need to be prevented from reading, voting, or holding a job. When a society gets really frightened, see, we must protect people from themselves. Let's start at the girls and the darkies and work our way up.

**/**** Image B- Sound A Extras B-
starring Scarlett Johansson, Colin Firth, Tom Wilkinson, Judy Parfitt
screenplay by Olivia Hetreed, based on the novel by Tracy Chevalier
directed by Peter Webber

by Bill Chambers It's a tad perverse to shoot a film about the world of Johannes Vermeer in 'scope, considering the artist's own cramped reflection of that world on portable canvasses. A shut-in, if we interpret his life through his surviving pictures, Vermeer didn't just paint in a lambent room on the upper level of his mother-in-law's house in Delft, he painted the room itself--the begrimed walls, the half-stained furniture, the Gingerbread-house windows that caught his human subjects (often, it appears, members of the servant class) in a tractor beam of light.

by Walter Chaw There is a moment in the trailer for Peter Hyams's absolutely abominable The Musketeer where a series of scenes are edited in such a way as to suggest that Justin Chambers's dashing D'Artagnan is promising stunned-looking waif Francesca (Mena Suvari) he will return for her. In the film, in truth, D'Artagnan makes the promise to his fallen horse (it's an easy mistake to make). I mention this to right an injustice, for the great beast lying there frothing in all its exhausted equine glory turns in what is easily the best performance of the whole catastrophe. I felt a lot of sympathy for that poor steed, the only character in the film with which I had even a moment's identification: we'd both been ridden hard and put away wet.

by Bill Chambers They certainly dressed the part in those days. As the pre-eminent German filmmaker F.W. Murnau, John Malkovich declares: "We are scientists engaged in the creation of memory." On set, before the lamps are fired up and action is called, Murnau and his crew don tinted aviator goggles, looking as if they're about to launch an atomic bomb. This was standard practice during cinema's formative years, when it took an intense amount of light to satisfactorily expose an image. (It was not uncommon for those who didn't take precautions to go blind later in life.) But Malkovich/Murnau is not describing costumes; he's probably, in fact, speaking for the makers of the gothic comedy in which he appears as the catalyst, Shadow of the Vampire. Director E. Elias Merhige, working from a screenplay by Steven Katz, forges a new memoir of Nosferatu, Murnau's unauthorized, silent-film-era take on Bram Stoker's Dracula that was rumoured to star a real vampire.