Givertaker **½/**** (d. Paul Gandersman)
A nice, compact cautionary tale featuring a novice witch who takes vengeance on her buddies only to find there are Shadowmen living under other people's beds. I wish the lore were better developed, but it's paced beautifully and the young cast is game and lively. I wanted more, and I don't often feel that way.

by Walter Chaw I love Stoker, Korean master Park Chan-wook's updating of Shadow of a Doubt that centres on "young Charlie's" sexual awakening and all the perverse tensions attending that moment in a brittle upper-middle-class Nashville. Married to the swooning, hypnotic camerawork that has been the hallmark of Park's collaboration with DP Chung Chung since Oldboy, it has about it the perversity of a Victorian chamber drama squeezed through the filter of a very Korean take on class and sex--attitudes partly shaped by living in the shadow of one of the two or three most unstable regimes in the world. Stoker is a haunted-house movie without ghosts; a vampire movie without vampires. Its hero is a young woman who dons the raiment of the patriarchy at the end, lets blood on a field of flowers (one of a series of literal and metaphorical deflowerings), and stalks into the world fully-formed and dangerous. Park is best known for his "Vengeance Trilogy," of course, but it's the last film of that cycle, Sympathy for Lady Vengeance, that finds itself faced with the kind of moral dilemma that has marked Park's work since. It's arguable that before it, Park was an exploitation filmmaker. A conversant, brilliant exploitation filmmaker, but an exploitation filmmaker just the same. Lady Vengeance, however, deals with the ethics of violence and the toll of retribution on the avengers. It's smart as hell, beautiful to look at, nigh unwatchable. I mean that as praise, for it should be.

Fantastic Fest '16: S is for Stanley

by Walter Chaw Emilio D'Alessandro was the only delivery driver courageous enough to brave a rare London blizzard to deliver a giant phallus to the set of A Clockwork Orange sometime in the last half of 1970. An aspiring Formula 1 racer and jack of all trades, Emilio caught the eye that day of one Stanley Kubrick, American expat and obsessive-compulsive who happens to be one of the handful of undisputed geniuses in the auteur conversation. Moved to London at this point and destined to die there in 1999 after the first industry screening of his last film, Eyes Wide Shut, Kubrick hired Emilio essentially by writing him notes on index cards and Post-Its and steadily, some would say monstrously, dominating his life to the extent that it strained Emilio's marriage and caused him to miss the moment of his father's death. It would be easy to make a documentary like Alex Infascelli's S is for Stanley from that perspective: the madman in his laboratory, unwitting Igor fettered to his noisome wake. Harder is what Infascelli actually does, which is understand that the story here isn't about one odd duck, but two...and of a feather to boot. I love the moment where Emilio remembers his wife (they're still together) complaining that Stanley calls day and night: When he told Kubrick about it, Stanley proposed that the solution was to install a separate line in Emilio's house so that they could leave Emilio's wife out of it altogether. Emilio went for it.

by Walter Chaw A spiritual blood sister of Claire Denis's Trouble Every Day, Julia Ducournau's feature debut Raw is a crystallization of the last couple years' steady creep towards unabashedly gyno-centric fare. Kimberly Peirce's unfairly derided Carrie, which Raw references in one of its canniest, funniest moments, gathers monstrously in the rearview as a film doomed to have been just ahead of its time--literally hours away from being justly hailed as harbinger of a period of Furiosas and Reys, of It Follows and The Witch and The Green Room and more. As genre fare, Raw is as raw as it could be, the tale of a vegan first-year veterinary school student named Justine (Garance Marillier) who is submitted to a series of cruel hazing rituals that introduce her to body-image issues, existential crises, eating disorders, and the taste of sweet, sweet animal protein. You know, freshman year. Ducournau captures it all beautifully: the horror of being away, of surrendering to the higher university mind, of experimenting with drugs and drink and sex and becoming a full inhabitant of the desires and fears that will fuel the rest of your life. There's a scene early on where Justine visits a doctor (French writer and director Marion Vernoux) that reminds of the sequences in Jacob's Ladder where Jacob visits his angelic chiropractor. It's shot differently from the rest of the film. It's brighter. The film will never be this bright again.

BELIEF: THE POSSESSION OF JANET MOSES
**½/****
directed by David Stubbs

by Walter Chaw The line between documentary and fiction filmmaking is blurry. Better--more accurate--to say there's no difference at all: that documentary is just a genre in and of itself. Documentaries are products of points of view, of editing, of premise. You could film someone reading a phone book, but even that's a choice. Where to put the camera; why do it in the first place? Consider the Heisenberg Principle as well, this notion that the nature of anything changes once it's observed. Documentary as "truth" is an interesting philosophical question. It's sold as such, used politically, manipulated to serve purposes contrary to the idea of objective reality, but documentaries are never objective. Indeed, they challenge the very idea that the product of any endeavour could be truly objective. It's an interesting phenomenon in our technological wasteland that video "evidence" of malfeasance has proven inconclusive in courts of law. Replays in professional sports have only muddied the playing field. Everything is subject to interpretation and the product of someone's decision made somewhere along the way.

by Walter Chaw Self-consciously a throwback to supernatural softcore lesbian exploitation as indicated by the films of Jean Rollin and, specifically, James Kenelm Clarke's The House on Straw Hill (with bits of Pawel Pawlikowski's My Summer of Love in there), A.D Calvo's Sweet, Sweet Lonely Girl has a pretty good feel for time and place, but not much more than that. It's the definition of slight. Adele (Erin Wilhelmi) is a bit of an outcast. Gangly and awkward, she's sent away to be the helper for her mysterious shut-in of an aunt, Dora (Susan Kellermann), at Dora's decaying Victorian manse. One day Adele sees a beautiful girl at the market, Beth (Quinn Shephard), strikes up a friendship with her that evolves into a love affair of sorts, and discovers herself at the same pace that everything begins to fall apart with Dora. It's a recognizable tale of feminine agency told better, directly and indirectly, as recently as Osgood Perkins's February (now The Blackcoat's Daughter) and Robert Eggers's The Witch. Sweet, Sweet Lonely Girl begs comparisons because it begs them explicitly. Its soundtrack is AM Gold featuring choice cuts from Rod Stewart and Crystal Gayle as well as a few nice slices from Starbuck, and the film itself is a mix-tape in every way. 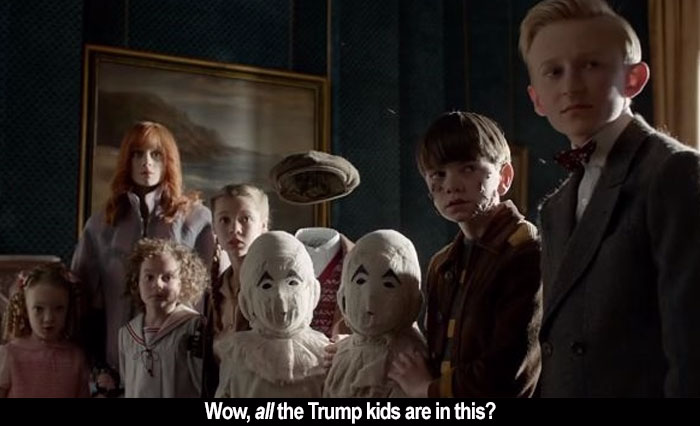 by Walter Chaw The right material and collaborator can bring out the best in Tim Burton, but it's mostly a one-way street. Before it soured, his work with Johnny Depp compelled because of the pathos Depp imported into projects like Edward Scissorhands and Ed Wood. When Burton lands the right material, as he did with Sondheim's Sweeney Todd, he's capable of masterpieces. I would argue that his most personal picture by far, the only one that plumbs the exquisite gulfs of loneliness and disconnection suggested by his other pieces, is Batman Returns. There's a scene in it where Bruce Wayne drinks soup, recoils that it's cold, then digs in again without hesitation when told by his long-term keeper that it's supposed to be. Bruce is a broken clockwork and wholly dependent; it's a fascinating read of the Batman character. Burton's Catwoman is the purest representation of the gender injustice that results in her mania and rise to power. The film is a spiritual predecessor to Burton's poetry collection The Melancholy Death of Oyster Boy and Other Stories, the contents of which speak of misbegotten births, misunderstood childhoods, and unimaginable betrayals that lead to lonesome deaths. These themes are always on the periphery of Burton's films. I wonder if as he's gotten more monolithic whether they don't become commensurately more difficult to tease out.

by Walter Chaw There's an early moment in Werner Herzog's misbegotten Salt and Fire where three scientists wander through an abandoned terminal in a Bolivian airport, scored by a cacophonous, disturbing Ernst Reijseger composition, that finds Herzog on comfortable, familiar ground. His films are at their best when they combine this kind of displacing, disquieting music against scenes of the mundane. Later, as his DP Peter Zeitlinger pans across the flaking spines of an ancient book collection, and again when Zeitlinger takes in the staggering scope of Bolivia's Uyuni Salt Flat, Herzog finds his rhythm as chronicler of unknowable mysteries and philosopher of intimations of immortality. The film would have been better without dialogue. A scene right around the mid-point where scientist Laura (Veronica Ferres) and mad industrialist Matt Riley (Michael Shannon) have a conversation about children in front of a crackling fire would have been transcendent silent. The planes of Shannon's and Ferres's faces, lit by flickers of orange, are suggestive of extraordinary depths and tensions. When they're forced to say things like "the tragedy is when men are afraid of the light," it tends to make it all gravid and unintentionally hilarious. When Michael Shannon is incapable of landing a weird line, imagine how the others fare.