by Walter Chaw In Zeina Durra's Luxor, Andrea Riseborough plays Hana, a British surgeon in Luxor, Egypt on a short leave between horrific assignments first in devastated Syria, then in Yemen. She's shell-shocked, it's clear. She spends her days wandering through the ancient city and allows herself one night to be picked up in her hotel's bar by an unctuous Yank throwing his money around. She lies in her hotel room for hours, trying to nap, and when she does sleep, she wakes to find herself another day closer to some sort of hell. Durra captures her listlessness as a feeling ineffable of being lost but never lost enough. Hana sits by herself at the far left end of a park bench, arms folded across her chest and a baseball cap pulled down low over her stunned expression. She visits a pyramid one day, just another tourist, and overhears a tour guide giving the yokels a taste of the gravid mysticism they're paying for. It all lands as empty for Hana. Hana, who doesn't have anything left inside after all this time bearing witness to the absence of God. 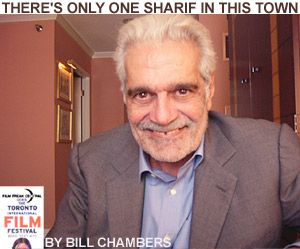 Continue reading "There's Only One Sharif in This Town: FFC Interviews Omar Sharif" »