by Walter Chaw It's strange to be writing this review a couple of days after Tony Scott ended his life by walking off a bridge in California--an event that inspired me to revisit my favourite of his films (Enemy of the State and Déjà Vu) and one that spurred me, too, to finally give Scott's Unstoppable another look after finding I had little use for it upon initial release. I have an aversion to Scott's movies in general; I don't have the muscle or sensitivity to distinguish between them and other stuttering, grandiloquent pictures that have resulted in things like Michael Bay. Believe me, the temptation is high to present a critical re-evaluation of his work immediately upon his passing. Positioning oneself as the guy who knew that Chris Farley was John Belushi is one of those vantages every critic wishes he had, if only for the brief respite from charges of elitism it might bring. But listen, The Taking of Pelham 1 2 3, Domino, Spy Game, The Fan, Days of Thunder, and Beverly Hills Cop 2--there's really no defense for any of it. And when I say that I like stuff like The Hunger, True Romance, The Last Boy Scout, or even Scott's Jim Harrison adaptation Revenge, I'm not saying I love them. Tony Scott's an auteur, sure--proof that "auteur" doesn't by itself confer a positive or a pejorative connotation. I'll give him this, though: He shot a Tarantino script as a remake of Badlands and produced a sneaky sequel to The Conversation, so, yeah, I'll miss the bastard, too. 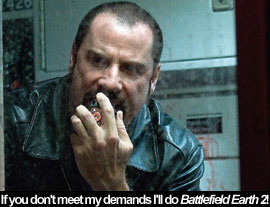 by Walter Chaw It's amazing that a film that takes place on a metal tube in a dank tunnel should have no trace of come in it. Less amazing when one considers that it's Tony Scott at the helm of this redux--the same Tony Scott who arguably reached the zenith of his potential with his vampire-erotica cult debut The Hunger, whose best film is the result of a superior screenplay by Quentin Tarantino (True Romance), and whose main claim to fame may be that he's behind one of the most homoerotic sequences ever captured on film in his gay amusement park Top Gun. Scott's The Taking of Pelham 1 2 3 (hereafter Pelham) is packed to the gills with meaningless, hyperactive visual gawping every bit as bad here as it is in his unwatchable Domino, so frantic that it has the opposite effect oPublishn the audience by rendering itself static and boring. (There's a lot going on in a screen full of snow, too, but all it does is put you to sleep.) The picture reunites Scott with his go-to leading man Denzel Washington, whose Garber, an MTA operator fallen under suspicion of taking a bribe, replaces Walter Matthau's weary, hangdog transit cop from the Joseph Sargent original. When ridiculous goon Ryder (John Travolta) hijacks the titular subway car with a pack of the usual suspects (including Luis Guzmán, of course), it's up to smooth-talking every-dude Garber to cover up the deficiencies of hostage negotiator Camonetti (John Turturro), the gasbag Mayor (James Gandolfini), and all the bumblefuck NYPD who manage to accidentally snipe one of the bad guys, crash a car racing through Manhattan, and decorate a couple of baddies with a good twenty clips of ammunition in the middle of Uptown. It also, as a way to give the film a contemporary slant against which the terminally un-hip Scott is well over-matched, demonizes Wall Street by having its chief baddie be a former securities trader who hatches a plan to fuck the stock market by making New Yorkers afraid that his plot is a terrorist attack. Pelham is, in other words, rather tasteless in addition to being awful. 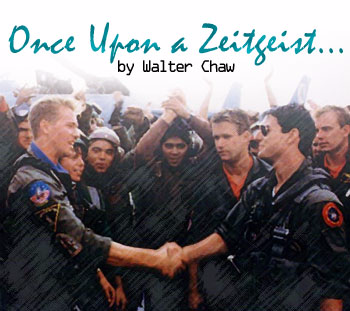 by Walter Chaw Released in 1986 and tonally identical to contemporary suck classics The Wraith and Wisdom, the Brat Pack travesty Blue City represents the nadir of a year that produced Blue Velvet, Down By Law, The Mosquito Coast, Henry: Portrait of a Serial Killer, Sid and Nancy, Aliens, Ferris Bueller's Day Off, The Fly, Big Trouble in Little China, Something Wild, Mona Lisa, and Night of the Creeps, for starters. It's the quintessence of why people remember the 1980s as a terrible decade for film, poor in every single objective measure of quality. Consider a central set-piece where our hero Billy (Judd Nelson) and his buck-toothed cohort Joey (David Caruso) stage a weird re-enactment of the heist from The Killing at a dog track that includes not only such bon mots as "I'm new at this! Give me a break!" but also the dumbest diversionary tactic in the history of these things as Joey tosses a prime cut on the track in front of a frankly startled/quickly delighted pack of muzzled greyhounds. Then again, it's not a bad metaphor for the Me Generation and its blockbuster mentality. After cracking wise a few times in a way that makes one wonder if he's suddenly become a Republican, Billy blows on the barrel of his gun in his best John Ireland-meets-Montgomery Clift and professional bad editor Ross Albert (the whiz kid behind Bushwhacked, The Beverly Hillbillies, and The Pest) cracks a little wise himself by cutting to a rack of hot dogs. Unfortunately, suggesting that Judd Nelson is gay as a French holiday is only mildly wittier than suggesting the same of clearly gay Tom Cruise. More on that when we get to Top Gun.

by Walter Chaw SPOILER WARNING IN EFFECT. What used to be the province of the Times Square grindhouse and drive-in movie theatres is now star-vehicle blockbuster fodder, making the revenge sub-genre's subversive qualities and carefully-cultivated atmosphere of frustrated rage suddenly a reflection of the demons plaguing mainstream culture. Though certainly more substantive than the hit-and-run remake of Walking Tall, Tony Scott's Man on Fire falls far below the redemptive qualities of Kill Bill, Vol. 2, offering the world the logical end result of a nation operating under the twin godheads of fear and Old Testament vengeance: a slickefied, iconographic, racist, sexist, huckster version of the grimy, low rent, pleasantly exploitative The Punisher. 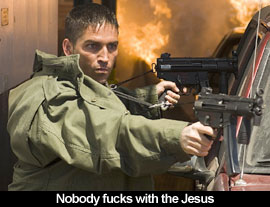 by Walter Chaw Who woulda thunk that crap-meister Tony Scott could be so in tune with the spirit of the times? Scott follows up Man on Fire--a vile piece of revenge-on-foreign-soil wish-fulfillment schlock--and Domino (another slice of the vigilante kind) with Déjà Vu, a time-travel fantasy complete with a horrifying act of domestic terrorism that noble ATF agent Carlin (Denzel Washington) is offered the chance, through the providence of limited time travel, to prevent. It's one of those questions, right? Would you smother infant Hitler in his cradle to prevent the tears that will follow--and, if you did, would it change the course of history or just substitute that Adolf for another? Alas, Scott ultimately degrades this fun cocktail party conundrum into an action-movie finale involving heartbreakingly beautiful love interest Claire (Paula Patton), clean-Marine grassroots sicko Carroll (Jim Caviezel, doing High Crimes all over again), and a ferryboat full of people crossing over from Katrina-ravaged New Orleans. Working in the picture's favour is that it's thick with national calamity, making one wonder if Scott would even get a movie made anymore were he not so quick to jab a needle into the collective jugular. The pall of our recent history hangs over the proceedings like a borrowed mourning veil, but Scott muse Washington is so good--and the film's premise so loopy--that en route to touching the steadily more tiresome post-9/11 bases of illegal/omniscient surveillance and sour regret, Déjà Vu actually breathes a little. It's the best Tony Scott film since the underestimated, unofficial The Conversation sequel Enemy of the State, which ran over on the same technophobic ground. Call it another science-fiction romance to join this season's already-bursting slate of Children of Men, Stranger Than Fiction, and The Fountain.

by Walter Chaw Rigorous and principled, George Clooney's Good Night, and Good Luck. is a curiously slight film for more reasons than the fact that almost a third of it is comprised of archival footage integrated semi-successfully into the story. It's a recreation of a very specific battle in a very specific war that resonates with our Patriot Act/Guantanamo Bay situation, and indeed, that's the target Clooney seems most interested in striking. But without a larger context (the sort that would have weakened its allegorical usefulness), the picture sets itself up as something as obvious as it is minor and feather-light. It's a professional, high-minded, and staid biopic is what I'm saying, a film that says what it says with the stark B&W cinematography of a Dr. Strangelove, but in its icy, humourless way, it's the same stark B&W cinematography of a Fail-Safe, too. It's close and under-populated--and even with so insular and finely-focused a spotlight, it contains at least two completely superfluous characters.

by Walter Chaw The defining moment of Spy Game, Tony Scott's latest exercise in stylistic excess, occurs at about the midway point. Playing CIA spymaster Nathan Muir, Robert Redford debriefs his best agent Tom Bishop (Brad Pitt) atop a building in Cold War Berlin. After a tense exchange, an enraged Bishop throws his chair off the barren, windswept rooftop. The problem with the scene is neither the preposterous screenplay by Michael Frost Beckner and David Arata to which it belongs, nor Scott's infatuation with the panoramic aerial shot, nor the way that Harry Gregson-Williams's ubiquitous score threatens here and at every other moment to rupture your eardrums. It's not even in the ridiculously out-of-place imagistic Xerox of Wings of Desire, Wim Wenders's melancholy ode to love and Berlin.