by Walter Chaw Impeccably-costumed and impossibly-handsome action figures are arranged in cool poses throughout Ocean's Eleven, Steven Soderbergh's updating of the same-named Rat Pack caper. A throwback to the star-driven cinema of the Fifties and a reflection of our own fanatical interest in cults of personality, the film features transparent performances (with the exception of Don Cheadle, each performer in Ocean's Eleven is playing his- or herself), and the same kind of sadistic voyeurism that impels us to simultaneously deify and find fault with our favourite actors keeps our peepers glued to the screen as George Clooney, Brad Pitt, Matt Damon, Elliot Gould, and Carl Reiner revolve around one another in a loose heist intrigue intended to relieve Andy Garcia of both his millions and his girlfriend. 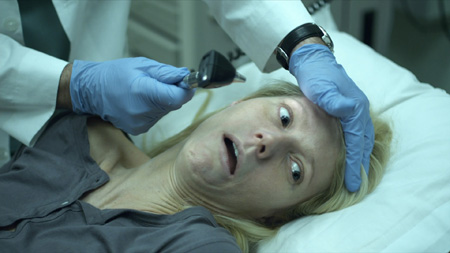