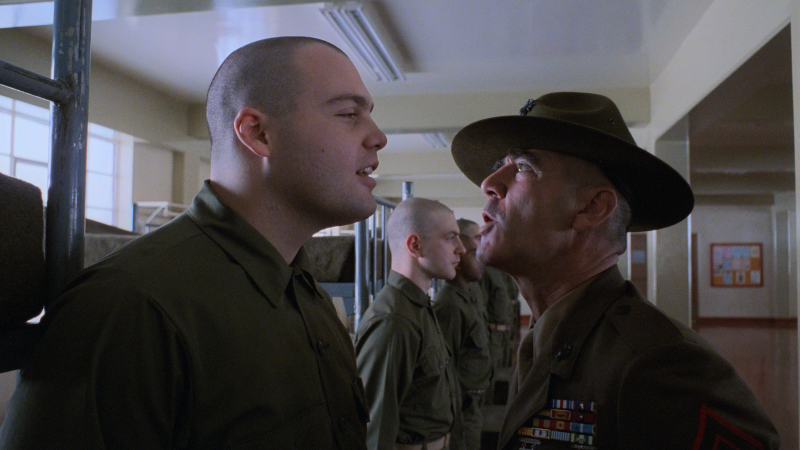 by Bryant Frazer It's obvious from the beginning that Stanley Kubrick loves R. Lee Ermey. Loves him. Though Ermey is only the fourth-billed actor in Full Metal Jacket, Gunnery Sergeant Hartman may as well be the star of the show. He's described in Gustav Hasford's source novel as "an obscene little ogre in immaculate khaki." His barked insults and obscenities dominate the first section of the film--a tour de force showing how Hartman wears down (and, supposedly, toughens up) a barracksful of U.S. Marine draftees, blasting away at their natural aversion to aggression and reprogramming them as soldiers. Kubrick was lucky to find him; a Vietnam War vet and former Marine Corps drill instructor, Ermey brings an irresistible combination of outrageousness and authenticity to the part. Hartman could have come across as an unlikely caricature but for Ermey's ferociousness.

by Bryant Frazer In 1965, film director Stanley Kubrick and science-fiction author Arthur C. Clarke embarked on a remarkable collaboration. Taking an old Clarke short story as their starting point, the duo rewrote it and dramatically expanded its scope, drafting the blueprint for a film to be directed by Kubrick as well as for a novel to be scripted by Clarke. In Clarke's original story, "The Sentinel", astronauts found an ancient artifact on the moon that functioned as a radio beacon, transmitting signals into outer space. The expanded film treatment was many times more ambitious, beginning in the deep pre-history of human evolution and climaxing with a futuristic journey to Jupiter, where one man confronts an unseen alien intelligence--and undergoes transformation and rebirth. More than a science-fiction thriller or space-bound adventure movie, 2001: A Space Odyssey is a meditation on Man's place in the universe that mounts a convincing argument that the sum total of human knowledge gathered over the millennia is insignificant, at best, when compared to the vast mysteries of the greater universe. That sense of scale is demonstrated, vividly, in a climactic sequence that uses colour and sound to depict a wild journey into--a distant realm? Another dimension? A new plane of human existence?

Fantastic Fest '16: S is for Stanley

by Walter Chaw Emilio D'Alessandro was the only delivery driver courageous enough to brave a rare London blizzard to deliver a giant phallus to the set of A Clockwork Orange sometime in the last half of 1970. An aspiring Formula 1 racer and jack of all trades, Emilio caught the eye that day of one Stanley Kubrick, American expat and obsessive-compulsive who happens to be one of the handful of undisputed geniuses in the auteur conversation. Moved to London at this point and destined to die there in 1999 after the first industry screening of his last film, Eyes Wide Shut, Kubrick hired Emilio essentially by writing him notes on index cards and Post-Its and steadily, some would say monstrously, dominating his life to the extent that it strained Emilio's marriage and caused him to miss the moment of his father's death. It would be easy to make a documentary like Alex Infascelli's S is for Stanley from that perspective: the madman in his laboratory, unwitting Igor fettered to his noisome wake. Harder is what Infascelli actually does, which is understand that the story here isn't about one odd duck, but two...and of a feather to boot. I love the moment where Emilio remembers his wife (they're still together) complaining that Stanley calls day and night: When he told Kubrick about it, Stanley proposed that the solution was to install a separate line in Emilio's house so that they could leave Emilio's wife out of it altogether. Emilio went for it. "A story of the supernatural cannot be taken apart and analyzed too closely. The ultimate test of its rationale is whether it is good enough to raise the hairs on the back of your neck. If you submit it to a completely logical and detailed analysis it will eventually appear absurd."
--Stanley Kubrick, interviewed by Michel Ciment, Kubrick: The Definitive Edition, Part 4

by Bryant Frazer Did director Stanley Kubrick encode The Shining with an admission that he helped create phony footage of the Apollo moon-landing in 1969? Well, of course not. That’s nuts. It’s a cockamamie argument. And it’s one of several cockamamie arguments advanced by viewers given a platform for their unconventional theories in Room 237, an odd duck of a documentary about the conclusions reached by five different Kubrick fans upon very close analysis of The Shining. 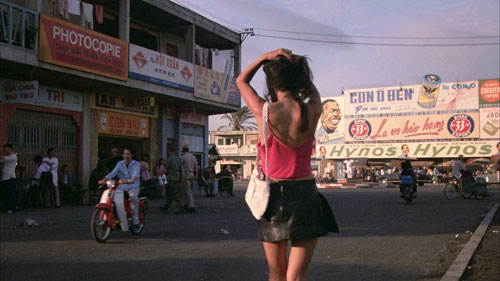 by Alex Jackson One of the most noticed Stanley Kubrick trademarks is a scene in a bathroom. I haven't read too much about why there is always a scene in a bathroom, but rarer still are comments related to what goes on in the bathroom. Different activities have different meanings. Urination (A Clockwork Orange, Eyes Wide Shut) is a sexually arrogant act. It's the one bathroom activity in Kubrick's films that is done with the door open. Bathing (Spartacus, Lolita, Barry Lyndon, A Clockwork Orange again, The Shining) is a hedonistic, bourgeois indulgence and an escape to a safe place. Kubrick is not beyond exploiting the bath's mythological, symbolic connotations as the unexplored subconscious (the subversion of Aphrodite iconology in The Shining) or the womb (Star Child Alex in A Clockwork Orange); bathing is largely a private activity, you see. It is sometimes interrupted, but when that happens the invasion of privacy has significance. (James Mason's interrupted bath in Lolita, for example, had purely narrative- and character-based implications. He regarded it as just another humiliation to add to the pile.) Defecation is even more private, so private that a Kubrick character has never interrupted it. To defecate (Dr. Strangelove, 2001: A Space Odyssey) is human, you see. Everybody has to take a shit, but to shit is shameful. The perfect human being would not shit, would indeed be beyond shitting. The HAL computer doesn't shit, does it? Does the Star Child shit? I sincerely doubt it!

by Alex Jackson Who is Lolita? There seems to be no independent, cognizant life to the character. She exists purely to be desired or despised. Certainly, she is seen as neither a tragic figure nor a victim--Lolita is always in control. She always has a tight grasp on what her needs are and understands how she's going to meet them. But simply being clever and conniving doesn't make you a real person. Humanity could be defined as our ability to experience pain and Lolita lives a practically pain-free existence. Double entendre intended, if you prick Lolita, she isn't going to bleed. In her eyes, sex doesn't have many drawbacks. Men lust after her and this gives her power over them.

by Alex Jackson If The Shining has dated the most of Kubrick's films, Barry Lyndon, which immediately preceded it, has dated the least. In 1976, Barry Lyndon was nominated for the Best Picture Academy Award alongside Jaws, One Flew Over the Cuckoo's Nest, Dog Day Afternoon, and Nashville. I have some reservations about a couple of those, but there's no arguing that these are a few of the most revered American movies of the last four decades. And yet, they're all inextricably linked to the year 1975. Certainly, they still work on their own terms, but today there's an unspoken contract that we will acknowledge and accept them as something produced thirty-five years ago. We don't have to make any such concessions with Barry Lyndon; there isn't anything vintage about it.

by Alex Jackson SPOILER WARNING IN EFFECT. The Shining has perhaps dated the most of Stanley Kubrick's films. It's not as stylized as Dr. Strangelove or Eyes Wide Shut, Kubrick pictures set in the "present" that nonetheless feel as foreign as those set in the future and distant past. Particularly with the earthy orange-pinks and piss-yellows dominating the Overlook Hotel's lobby in the opening sequence, not to mention the child star's shaggy head of hair, the film has deep roots in the late-Seventies to early-Eighties. However, I'm beginning to think that the aging process itself has provided the necessarily alienating "timeless" quality.

by Alex Jackson Seeing 2001: A Space Odyssey as a film about evolution is natural but ultimately inaccurate, I think. The Darwinist views evolution as an external response to the world--a survival mechanism--while the Nietzschian views it as an internal, ethical one. Both are touched on in 2001 and both are misleading in that they fail to acknowledge that Man's evolution in this film is born out of destiny. Out of fate. More appropriate to view evolution here in terms of the lifespan of the butterfly or moth. Guided by a supreme alien intelligence, the species of 2001 evolves from the larva (ape) to the pupa (human) to the butterfly (star child).