***½/**** Image A- Sound B Extras B+
starring Paul Newman, Charlotte Rampling, Jack Warden, James Mason
screenplay by David Mamet, based on the novel by Barry Reed
directed by Sidney Lumet

by Jefferson Robbins It's never clear if disgraced lawyer Frank Galvin (Paul Newman) is a practicing Catholic, as are so many of the souls around him in a grey, hopeless Boston--but there's a crucifix on his office wall, and he sure has the posture down. Note how many times in Sidney Lumet's legal drama Newman is caught posed in the final stage of genuflection, Roman brow in profile, knuckle touched to lips. He's skipped making the sign of the cross and gone straight to kissing a nonexistent rosary. His is a corroded soul, though in David Mamet's screenplay construction, at least he knows it's corroded. Chasing any lawsuit that will end in a payday, Galvin lies right to the faces of dozens of people. In this, he's no better than his opponents in court, save that they lie through the proxy instruments of forgery and coached testimony, keeping their hands clean. They sail through the system frictionlessly, while Galvin feels himself dying a little each time--unless it's in the service of something greater. In his wanderings, windowpanes and desk fans cast the impression of a cross over him.

by Ian Pugh There's a great story just screaming to be told in Sidney Lumet's Daniel: In reworking the legacy of Julius and Ethel Rosenberg from the perspective of their fictionalized son, it's poised to deliver a fascinating tale about the tragic, perhaps inevitable consequences that starry-eyed idealism can have on the family dynamic for generations to come. This strange collision of Winter Kills, The Godfather Part II, and Citizen Kane finds sensitive intellectual Daniel Isaacson (Timothy Hutton) deeply opposed to pasting his parents' name on a foundation for "radical studies" in service to the anti-war movement circa 1967, which puts him at odds with his revolution-obsessed sister (Amanda Plummer). Soon, however, Susan attempts suicide, forcing Daniel to hunt down the facts and search his memories for the truth about his parents Paul (a manic Mandy Patinkin) and Rochelle (Lindsay Crouse), who were accused of selling--or conspiring to sell--A-bomb secrets to the Soviets and executed at the height of the Red Scare. Were they really that deeply involved in a conspiracy, or were they just patsies? 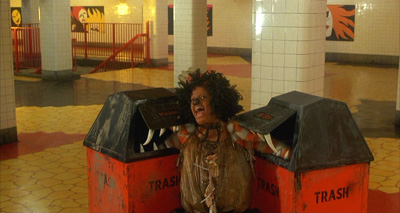 by Bill Chambers When news of Nick Nolte's arrest for driving under the influence of the date-rape drug hit the Toronto International Film Festival last year, just days after he'd made a strong showing there with Neil Jordan's The Good Thief, I immediately flashed back to the time I met Nolte--"met," alas, a figure of speech in this case: We crossed paths in the lobby of the Park Hyatt Hotel. His beanstalk frame sheathed in an emasculating banana-yellow housecoat, Nolte wore a pair of bookish specs that offset his craggy mug, and his snow-coloured hair stood unnaturally on end, as though he'd just seen a ghost. On his way to record interviews for Breakfast of Champions (and looking a lot more like that film's Kilgore Trout than like the erstwhile Tom Wingo), Nolte growled this to a gawping me in passing: