by Walter Chaw SPOILER WARNING IN EFFECT. Robert Altman's McCabe & Mrs. Miller is, even more than his Nashville, the quintessential American film. The whole of it is in a constant state of construction and reconstruction, a continuous and ever-doomed battle against entropy and that human desire to matter a little before it's all over too soon. The modern analogue for it is Paul Thomas Anderson's There Will Be Blood, as both films detail the sad lives of entrepreneurs staking a claim for themselves on the frontier at the beginning of America's potential. The only reward for ambition, unfortunately, is death. Death is the only reward for anything. John McCabe (Warren Beatty) is a swaggering loudmouth in a big fur coat who one day struts into the tiny town of Presbyterian Church, pop. 120 (the majority of those prospectors and illiterate scumbags), lays a cloth across a table in the disgusting saloon of Sheehan (Rene Auberjonois), and proceeds to take the rubes for everything they're worth. With that cash, he buys three broken-down whores, then lights out for the edge of town, where he starts a company.

by Alex Jackson SPOILER WARNING IN EFFECT. In the opening scene of Robert Altman's The Player--an uninterrupted tracking shot lasting 7 minutes and 45 seconds--chief of studio security Walter Stuckel (Fred Ward) discusses long tracking shots with mailboy Jimmy (Paul Hewitt). Stuckel talks at length about Rope and Touch of Evil and says directors back then knew how to shoot a film. Jimmy mentions Bernardo Bertolucci's then-recent The Sheltering Sky and Julien Temple's Absolute Beginners as having terrific long shots, but Stuckel shrugs and mumbles that he hasn't seen them. It appears that Altman and screenwriter Michael Tolkin (adapting his novel of the same name) are illustrating a point about the insularity of the studio system and how the studios have no reference point outside their own past. Today, a complaint like that seems positively churlish. I honestly would not expect any of the newer executives to know or appreciate Rope or Touch of Evil, much less any current chiefs of security! In my view, anybody familiar with American cinema to that extent is already distinguished from your typical capitalist.

by Walter Chaw On the shortlist of Robert Altman masterpieces, MASH compares best with his The Long Goodbye in that both are unapologetically informed by the cult of masculinity: fucking and fucking people up. Tenderness in the film is someone breaking their hand on someone else's head when that someone else says something stupid to a kid. Better, it's giving a different kid a stroke magazine to counteract his de facto religious training at the hands of an obvious nutjob (who's nutty mainly because he's trying to impose enlightenment where enlightenment cannot by definition exist). Accordingly, matters of spirituality and men of the cloth are to be scoffed at while other rituals--like the rites observed in an operating theatre, or golf (a game played with clubs), or football, or the pursuit of women--are regarded with the obsessive gravity of a lower primate. It's about male bonding, all that cruelty towards women and disrespect of authority and open racism--the game of me-against-you in a film that, contrary to popular consensus, isn't a Hellerian satire about the absurdity of war, but what may be the saddest war film ever made in that it identifies conflict as something that, however contrary to civilization, is inextricably hardwired into our bestial nature. We're vile, stupid, ignoble apes and we aspire to ideals we're eternally incapable of honouring. 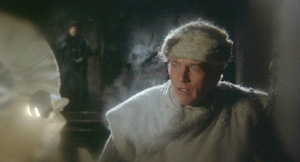 by Bill Chambers Set during another Ice Age (in a featurette on the DVD, co-writer/director Robert Altman makes the even loopier suggestion that the action takes place on another planet, perhaps to either demonstrate what little use he has for prologue or account for a total absence of people of colour), Quintet stars Paul Newman--never particularly well-matched with the iconoclasts--as Essex, a seal hunter trekking across the frozen tundra with pregnant wife Vivia (Brigitte Fossey) in search of his brother Francha (Tom Hill), who lives in candlelit ruins that now constitute a metropolis. Francha greets Essex by inviting him to play Quintet, a glyphic board game that has developed a religious following in these joyless times (some of Quintet's adjudicators have even adopted the names of patron saints, and they all wear makeshift Tudor caps), and when Essex goes off to fetch firewood, Altman pulls a Psycho and kills off every member of his party. It turns out that latter-day Louis XIV Grigor (Fernando Rey) has turned this dystopia into a human Quintet board by orchestrating the deaths of losing players. For largely nebulous reasons, Essex assumes the identity of Francha's assassin and joins a high-stakes tournie; Grigor sees through this ruse but decides to humour him, if only because to do otherwise would be unsportsmanlike.

by Walter Chaw There is a moment in Robert Altman's beautifully metered The Company where we're introduced to a cook played by James Franco through a low angle shot hovering over the green, smoke-haloed expanse of a gin-joint pool table. Wordless, the sequence plays out as Ry (Neve Campbell, never better) shoots a rack to the cool blues slinking out of a corner jukebox, glancing up now and again to meet Josh's (Franco) frank interest with gradually thawing humour and heat. Discretely, the film cuts to the next morning as Josh cooks an omelette with what's available in the kitchen of Ry's artist's loft.

by Walter Chaw A thematic continuation of The Player's violent iconoclasm, Robert Altman takes on the very British "Upstairs, Downstairs" class struggle in Gosford Park, a film that resolves itself as another full-frontal assault on the Hollywood studio system. Misanthropic, smug, and pessimistic, it behaves like an Agatha Christie chamber mystery, complete with secretive service staff, bumbling policemen, and the usual upper-crust suspects, but it's ultimately little more than an unavoidable homage to Renoir's The Rules of the Game and a dig at a system outside of which Altman eternally finds himself. Thankfully, Gosford Park more resembles the genre-bending Altman of Kansas City than the truculently proselytizing Altman of Dr. T & the Women.

by Bill Chambers It's nice to see Robert Altman doing studio work again. After 1980's disastrously-received Popeye, the director steered clear of mainstream Hollywood entirely. Perhaps this is a chicken-egg scenario and it steered clear of him, but no matter: his return to a more formulaic brand of filmmaking showcases the director at his best and not-so. The Gingerbread Man is based on a dusty screenplay by John Grisham; curiously, for such an airport writer, several Important Filmmakers have adapted Grisham in the past (Sydney Pollack, Alan Pakula, and Francis Coppola), but nobody's done it with more personality than Altman.