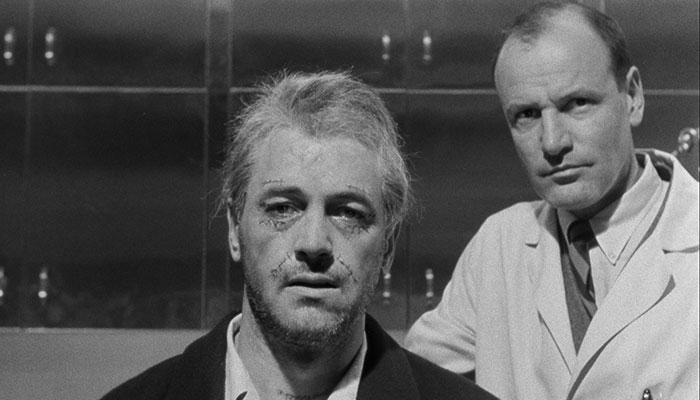 by Walter Chaw SPOILER WARNING IN EFFECT. For the longest time I wanted to write a book about John Frankenheimer, the crux of which would be a closer look at the relationship, if there was one, between the declining quality of his work and the assassination of his buddy Bobby Kennedy. It would be a cultural study, see, this way to tie the death of the Sixties with a director who for me definitively speaks to the rises and valleys of that decade, and who paved the way for the despairing paranoia flicks of the 1970s. In the end, I was defeated by the prospect of dealing with Frankenheimer's later films--not because they were all as bad as Prophecy (or that any of the others are near as bad as Prophecy, or that anything could be), but because many of them are really, really good in really, really difficult ways to quantify. Closer to the truth of his output post-RFK assassination is not that it's terrible, but that it's all Seconds again in some form or another: diaries of personal apocalypses and the constant threat of the dissolution of identity. Besides, I think there might be an entire book in 52 Pick-Up alone.

by Walter Chaw This is a tough one. As an avowed if guarded fan of director John Frankenheimer, his involvement with The Island of Dr. Moreau is something like a gobsmacker. Sure, he'd ventured into genre before with the ridiculous Prophecy, while, arguably, his two best films--The Manchurian Candidate and Seconds, his masterpiece--are genre pieces, too. But I think at the time, bringing in Frankenheimer three days into a troubled shoot to replace that assclown Richard Stanley was more an act of expediency than of ingenuity. If New Line thought they were getting a closer, they were right; if they thought they were getting someone who could corral the downward-spiralling Val Kilmer, they were less right ("Will Rogers never met Val Kilmer," Frankenheimer famously said). What they probably weren't expecting was that Frankenheimer would turn in something that, though critically-savaged at the time, had some legs. No, The Island of Dr. Moreau isn't a whole, falling apart as it does in the last half-hour or so, but it is the sort of movie that hints at larger issues and boasts enough indelible moments to deserve another look. Truth is, only movies this odd and discomfiting earn this amount of misdirected ire. It's not to say there's not a lot wrong with the film, but rather to suggest that the chief criticisms of it being strange and "a mess" aren't among them. 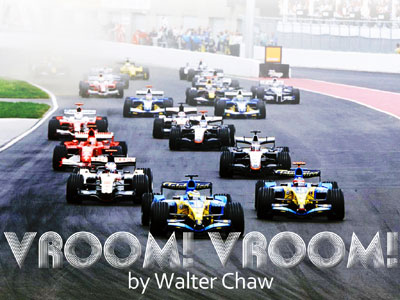 by Walter Chaw Of the major films produced during John Frankenheimer's fulsome period (that stretch between The Young Savages and Seconds that saw him as a giant among giants, tearing off masterpieces major (The Train, The Manchurian Candidate) and minor (The Birdman of Alcatraz, Seven Days in May)), Grand Prix has always stuck out for me as a swing-and-a-miss. There's no disputing either its technical innovation, which saw cameras mounted to Formula One cars for the first time, or Frankenheimer's fire, which seemed to single-handedly will the production to the finish line despite prickly subjects, competition from a Steve McQueen Formula One project in simultaneous development, and insurance companies pulling out when Frankenheimer insisted on his stars doing much of their own driving. But only upon my most recent revisit, occasioned by the picture's Blu-ray release, did it become clear to me the relationship that Grand Prix has with the same year's Seconds, far and away Frankenheimer's best film: an element of the biomechanical--of Frankenstein, sure, but Icarus1, too, where man metastasizes himself with machines of his own creation to achieve the forbidden, whether it be beauty, or endurance, or speed...or immortality. It's therefore a film that may get at the heart of auto racing's allure for not only its participants but also its true believers. Elements of Harlan Ellison's "Ernest and the Machine God"--this idea that while anything's possible through technology, the debt of that ambition is paid out in blood.

by Walter Chaw There weren't many American directors who enjoyed a hotter streak in the Medium Cool '60s than John Frankenheimer. He had the pulse of the mid-decade sea change from the relative conservatism of the '50s, having clearly been cognizant of the long burn of the Civil Rights conversation and the constant, fraying wear-and-tear of HUAC and the Cold War. He rubbed elbows with the Kennedys, hosting Bobby at his house in Malibu the day before/of Bobby's assassination at the Ambassador, whereupon it's fairly inarguable that Frankenheimer began to lose his way. He'd continue to helm interesting films and damned impressive ones, too, like The Iceman Cometh and 52 Pick-Up, but none would have the urgent subtlety of his mid-'60s output. Instead, they'd become increasingly...remote? Detached, at least, if not occasionally outright embarrassing for everyone involved. (Prophecy, for instance--a film that tries to ride the contemporary-issue train but shows its fatigue and desperation in every ridiculous, strained minute.) In a way, Frankenheimer's Seconds, with its alienation and bodily remove, presages his own artistic transformation. I wonder whether he lost the nerve to surf the edge of the zeitgeist, leaving the low arc of our collective tendency towards self-destruction to its own shrinking concentric hells. It's possible that after The Manchurian Candidate's dead-eyed paranoia and Seconds' alarming prescience about the impotence of the American icon-as-hero, Frankenheimer was tired of being right. If it sounds like I'm ascribing something supernatural to his artistic acuity, maybe I am. Frankenheimer in this period is that rare filmmaker who works half in technical perfection and half in the unconscious, in the thrall of what Coleridge used to refer to as The Artist as Aeolian Harp. He was an instrument at the caprice of the winds of the age. He was, that is, until about 1968, when being the vessel of portent became, should we conjecture, painful enough that he tried drowning himself in booze and regret.

THE MANCHURIAN CANDIDATE
****/**** Image A+ Sound A Extras B+
starring Frank Sinatra, Laurence Harvey, Janet Leigh, Angela Lansbury
screenplay by George Axelrod, based on the novel by Richard Condon
directed by John Frankenheimer

by Bill Chambers SPOILER WARNING IN EFFECT. As the zeitgeist is one of those things we tend to discuss in the past tense, you have to wonder whether it's a vacuum or a barometer. In other words, the point at which culturemongers finally lunge at a craze is usually once it's begun shrieking its death rattle, and yet a post-mortem of said craze invariably divulges a complex tapestry of art and politics, the ascription of happenstance to which seems preposterous. Our own Walter Chaw brilliantly observes in recent omnibus reviews pairing Love Me If You Dare with Valentin and Dodgeball with Napoleon Dynamite that leitmotifs are emerging at the box office free of predetermination, and I myself got a faint chill when I became cognizant of having consecutively watched the upcoming DVDs of John Frankenheimer's 1962 The Manchurian Candidate, Bob Clark's 1972 Dead of Night (a.k.a. Deathdream), and William Lustig's 1997 Uncle Sam. The Manchurian Candidate is getting reissued because MGM wants to piggyback the P&A for this summer's star-studded remake, Dead of Night because it's a perennial cult fave, and Uncle Sam because Lustig owns the company; three separate objectives, then, for putting out three different pictures all concerning shell-shocked war veterans bringing the violence home with them. Considering the length of time it must have taken to prepare these beautifully mastered, supplement-rich discs, that they coincide with not only each other but also the cooling of patriotic fervour (coupled with the spontaneous theatrical release of Michael Moore's anti-Dubya Fahrenheit 9/11) is like getting the rare privilege to see the forest for the trees.

by Walter Chaw Before Thomas Harris created a genius shrink-turned-serial murderer, he wrote the everything-old-is-new-again terrorist saga Black Sunday, managing to incorporate the Super Bowl into its tale of good intelligence saving the day. How novel. What's constant between this and Harris's Hannibal Lecter trilogy is his interest in broken heroes: the inversion of the man of action archetype that germinated in the Fifties Western tradition and flowered in the voodoo ego-nomics of the Reagan-mad Eighties, locating Black Sunday firmly in the deep well of Seventies cinema--filthy with ineffectual champions and astringent endings. But where Harris's novel understood its place in the bittersweet, paranoid zeitgeist, Black Sunday, with its all-star cast (Robert Shaw two years after Jaws, Bruce Dern at his peak, Marthe Keller a year removed from Marathon Man), megalomaniacal producer Robert Evans, and blockbuster aspirations, proves to be another Star Wars-style harbinger of the impending end of what was possibly the most amazing period in film in history.

by Walter Chaw There is a moment in the middle of John Frankenheimer's relentlessly campy (and prophecy-free) Prophecy when noble savage John Hawks (essayed by Irish-Italian Armand Assante), eluding the fuzz, runs through a forest clearing, into a cabin, and out a closed window. Why Hawks didn't just take off into the woods is a mystery almost as great as what happened to Frankenheimer after the 1960s. I also liked a scene that finds professional weepy milquetoast Talia Shire with a mutant bear cub chewing on her throat.