by Walter Chaw There is a moment in the middle of Elia Kazan's On the Waterfront that stands out for me as one of the defining in my love of movies. Terry Malloy (Marlon Brando) confesses to his girlfriend Edie Doyle (Eva Marie Saint) that he was involved in the Union execution of her brother, but rather than listen to Terry rehash events with which we're already familiar, a steam whistle drowns him out. The precise way that Terry moves his hands and the expression on Edie's face, growing from a gentle concern to horror, is among the most cinematic moments in the history of the medium. It's breathtaking in its simplicity and subtlety, revolutionary in its presentation and its eye, and exactly the right choice for the film at the right moment.

THE NIGHT OF THE IGUANA (1964)
****/**** Image B- Sound B- Extras A
starring Richard Burton, Ava Gardner, Deborah Kerr, Sue Lyon
screenplay by Anthony Veiller and John Huston, based on the play by Tennessee Williams
directed by John Huston 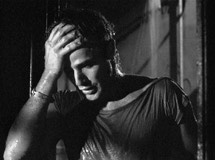 by Walter Chaw Marlon Brando is liquid sex in A Streetcar Named Desire, molten and mercurial. He's said that he modeled his Stanley Kowalski after a gorilla, and the manner in which Stanley eats, wrist bent at an almost fey angle, picking at fruit and leftovers in the sweltering heat of Elia Kazan's flophouse New Orleans, you can really see the primate in him. (Imagine a gorilla smelling a flower.) Brando's Stanley is cunning, too: he sees through the careful artifice of his sister-in-law Blanche (Vivien Leigh, Old Hollywood), and every second he's on screen, everything else wilts in the face of him. It's said that Tennessee Williams used to buy front-row seats to his plays and then laugh like a loon at his rural atrocities; he's something like the Shakespeare of sexual politics, the poet laureate of repression, and in his eyes, he's only ever written comedies. In Kazan's and Brando's too, I'd hazard, as A Streetcar Named Desire elicits volumes of delighted laughter. The way that Stanley's "acquaintances" are lined up in his mind to appraise the contents of Blanche's suitcase. The way he invokes "Napoleonic Law" with beady-eyed fervour. And the way, finally, that he's right about Blanche and all her hysterical machinations. The moment Stanley introduces himself to Blanche is of the shivers-causing variety (like the moment John Ford zooms up to John Wayne in Stagecoach), but my favourite parts of the film--aside from his torn-shirt "STELLA!"--are when Stanley screeches like a cat, and when he threatens violence on the jabbering Blanche by screaming, "Hey, why don't you cut the re-bop!" 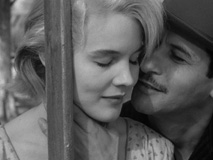 by Walter Chaw It makes perfect sense to me that the 1950s, our most openly culturally-restrictive decade, was also the decade that saw so many Tennessee Williams plays ushered to the silver screen for the outrage and closet titillation of Ozzie and Harriet. Repression always leads to explosion, and a film like Elia Kazan's Baby Doll--based on Williams's first screenplay, itself drawn from two of his early one-act plays ("Twenty-Seven Wagons Full of Cotton" and "The Long Stay Cut Short")--is a prime example of ground zero in the morality war, five years on from Kazan's first shot across the primrose bow with his Williams adaptation A Streetcar Named Desire. The resistance pushed back harder with Baby Doll, some Catholic leaders going so far as to promise excommunication for wayward eyeballs, while a giant billboard in Manhattan became a turgid lightning rod not unlike the one erected in the Valley for Vincent Gallo's The Brown Bunny some forty years later. In fact, the opening shot of the titular Lolita, Baby Doll (a simply fantastic Carrol Baker), is from her husband Archie's (Karl Malden) point-of-view through a keyhole: she in a crib, sucking her thumb. Shocking then, shocking now; that the powers-that-be chose this image for the poster says a little about naïveté and a lot about balls. 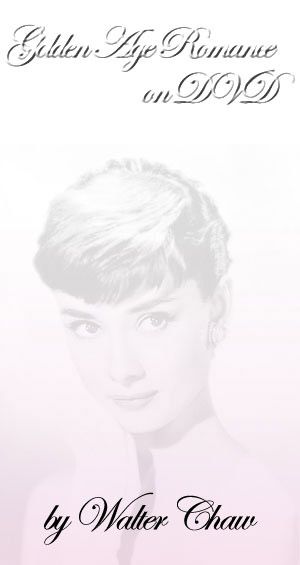 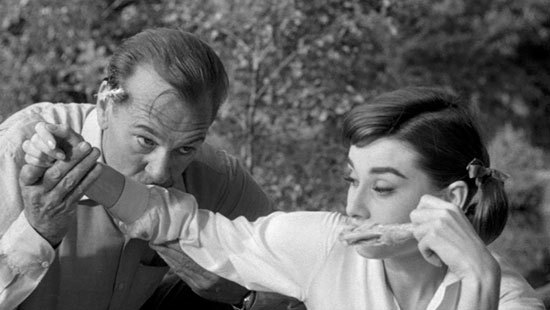 by Walter Chaw SPOILER WARNING IN EFFECT. It's one of those seminal moments that movies provide the culture with now and again, like the swoop up a little rise to an impossibly fresh John Wayne in Stagecoach, or the intervention of a fortuitous steam vent in The Seven Year Itch, this introduction we have to Audrey Hepburn as she's whirled around in a barber chair in William Wyler's Roman Holiday to reveal the pixie-cut heard 'round the world. That she's adorable is a given--the real issue is whether she's an actress or just a bundle of inexplicable charisma, a ganglion of celluloid starlight that evaporates under the slightest critical scrutiny. I love Roman Holiday, but I vacillate between indifference and actual dislike of the rest of Hepburn's films. I don't find her winsome in Breakfast at Tiffany's, am irritated by her in Charade, think she's appallingly twee in Love in the Afternoon. She doesn't hold her own against Sean Connery in Robin and Marian and gets blown off the screen by Albert Finney, Alan Arkin, and Rex Harrison in Two for the Road, Wait Until Dark, and My Fair Lady, respectively. If you ask me, Audrey isn't an actress so much as someone you would like to have known and maybe had the opportunity to cuddle, which makes her mega-stardom in the Fifties and Sixties all the more testament to her ineffable appeal. Happening right when Method was rendering personalities like Hepburn déclassé, she was making a career of being terminally anachronistic. It's Ozzie's Harriet, sashaying while Rome burns. Instant nostalgia; even when she was introduced for the first time, it must have seemed like ages ago.

by Walter Chaw A camp classic of a very particular variety, Otto Preminger's stylish, pedigreed Laura might best be read as a satire of Hitchcock's Rebecca, reuniting that film's Judith Anderson with another late, lamented mistress and acres more scenery to chew. It replaces George Sanders with Vincent Price, Laurence Olivier with stiff-as-a-board Boy Scout Dana Andrews, and a never-present heroine with Gene Tierney, she of the unspeakably-gorgeous cheekbones. Laura easily laps most films for narrative complexity, the sheer number of audacious hairpins it negotiates on the road of logic dizzying for their arbitrary contortions. The character of a fey, fifty-ish critic, Waldo Lydecker (Clifton Webb), who introduces himself to a detective investigating the murder of the titular Laura (Tierney) by stepping out of a bath like some hybrid of Smithers and Mr. Burns, acts as the piece's unreliable narrator, stalking through his scenes like a dandy in honorary high collar and spats while providing the strangest contention in a strange film: that this aging, fey, homosexual lothario was passionately in love with his ward, Laura. The picture might be the most overt iteration of film noir as a genre about emasculation ever put to celluloid, and trying to puzzle out whether Waldo's for real and chief gumshoe McPherson (Andrews) buys any of his honeyed hooey constitutes a good portion of what's fun and maddening in equal measure about it. That tension between what's ridiculous and what the characters take seriously makes Laura a mystery, for sure, but not for the obvious reasons.

by Walter Chaw There's a moment--well, there are dozens of moments, but there's a moment in particular--in Elia Kazan's follow-up to On the Waterfront, East of Eden, where James Dean (in the only film of his released during his lifetime), as the troubled Cal, asks his estranged mother (Jo Van Fleet) for a loan, all anxious tics and frightened eyes, seemingly uncomfortable in his own skin. It at once defines Dean's appeal to a generation of young folks, who saw reflected in him something of their own fear and trembling, and crystallizes the revolution in screen acting brought about by Dean and The Actors Studio brats Marlon Brando, Karl Malden, Julie Harris, and Montgomery Clift. It's comparable to the emergence of Johnny Depp in Edward Scissorhands--reactions, both, to Eisenhower eras defined by cultural repression and the indoctrinated magnification of the mythology of the American male. (Dean and Depp are similarly feminized--almost asexual--in these signature roles.) A later moment, Cal's offer of a gift to stern father Adam (Raymond Massey, playing the literal dry run to Melvyn Douglas's patriarch in Hud) of a cool grand won through a little harmless WWI-profiteering, is unavoidably linked to what we know of Kazan's friendly testimony before HUAC. It's knowledge that makes it impossible for a Union-busting dockworker's martyrdom to be just what it is--and impossible to see Adam's rejection of Cal as anything other than another cry for righteous forgiveness for an odious act done in good faith. East of Eden, of course, could also be a rejection of consumerism in the midst of the nascence of our consumerist wonderland--a reaction to our plutocracy's values and a further case for Dean as the sainted figure of rebellion that would fuel the generational schism of the '60s.