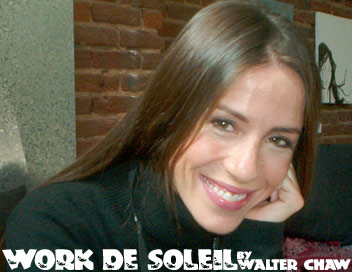 November 2, 2003|Over a thousand people packed into The Rise nightclub for the 26th Starz Denver International Film Festival's opening-night gala reception. A cavernous space with booming music and leggy cocktail waitresses, the venue was a drastic departure from last year's sedate to-do at the DCPA's Temple Buell Theater, and it was in one of the upstairs rooms that I first met Wentworth Miller, the tall, handsome, calm, and extremely courteous young star of--and, lucky for me, the best thing about--Robert Benton's pretty awful The Human Stain. I met him again the next morning for official purposes at Denver's also surprisingly tall Mag Hotel, plopped in the middle of the busy intersection of 19th and Stout along Banker's Row in lower downtown Denver. Best known for his guest appearances on television shows like "Buffy the Vampire Slayer" and "Popular" (and as an athlete with a literal bleeding heart in the seventh season premiere of "ER") as well as for the "Luke Skywalker" role in the unfortunate Dinotopia, Miller is receiving what could potentially be his big break, stealing the show from Anthony Hopkins, Nicole Kidman, and Gary Sinise playing a role that's surprisingly close to home. 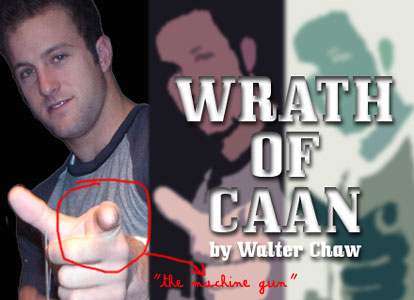 October 19, 2003|It's in a subterranean hotel breakfast nook with fountains and a tiny little glassed-in room for God knows what that I meet the manic Scott Caan, who wears a tight baseball t-shirt and demonstrates yo-yo tricks to the slight consternation of a publicist eyeing the glass enclosure, I thought, a little nervously. After showing me a trick of his own devising, the Caan Machine Gun, I asked him to repeat it so that I could photograph it: 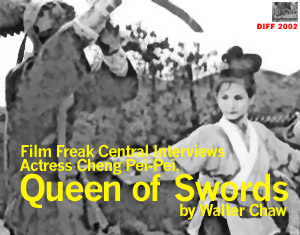 October 26, 2002|I confided in the amazingly beautiful Hong Kong action legend Cheng Pei-pei--recently seen as the villainous Jade Fox in Crouching Tiger, Hidden Dragon--that a screening of her classic Shaw Brothers film Come Drink with Me on a grainy bootleg copy as a small child gifted me with both a lifelong love of martial arts films and my first crush. Still lovely and distinguished almost forty years later, Ms. Cheng met me at the Daily Grind coffee shop in the Old Tivoli Brewery, where the Denver Film Society was running the 25th Denver International Film Festival and featuring a new print of Come Drink with Me that was originally struck for this year's Venice Film Festival. She was soft-spoken, polite, and exceedingly gracious; I was stricken by her humility and friendliness--old crushes die hard, I guess. I began by asking Ms. Cheng about her training as a dancer. 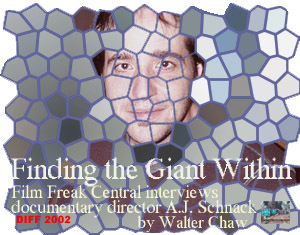 October 24, 2002|The kind of interview that They Might be Giants (hereafter TMBG) might appreciate, my chat with filmmaker A.J. Schnack was short, sweet, and to the point. In town for the 25th Denver International Film Festival with his film Gigantic: A Tale of Two Johns, a pop journalist-laden look at the phenomena of geek rockers TMBG, I shared a large sofa with the nebbishy Mr. Schnack and asked what moved him to make a feature-length documentary on his favourite band. 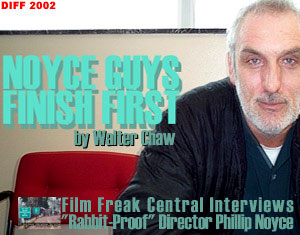 October 24, 2002|2002 is a banner year for director Phillip Noyce, who, after years toiling in the Hollywood dream factory, has returned home to his native Australia to helm a pair of spectacular and disparate films: The Quiet American and Rabbit-Proof Fence. Both played at the 25th Annual Denver International Film Festival, with Noyce also honoured as a tribute guest at a special screening of his marvellous "locked room" thriller Dead Calm (1989). I met Noyce at the historic Tivoli Brewery's hospitality suite on the coldest morning in Colorado since probably last March, resulting in the imposing Noyce (6'4", easy) bulking up even more in a down jacket. 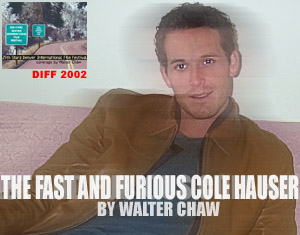 October 15, 2002|I met Cole Hauser, visiting Denver with his latest film, White Oleander, in tow (it opened the 25th Annual Denver Film Festival), at the press suite of the city's Hotel Teatro. A rising star, Hauser is along with Alison Lohman the best thing about the intensely mediocre White Oleander--he's the best thing, in fact, about a lot of films. With the virile presence of a young Brando (crossed with Jon Favreau) and a glacial mien, Hauser has escaped stardom only through his steadfast decision to take roles based on the quality of director or role rather than succumb to the bright lights of easy stardom. (Director John Singleton, with whom he worked on Higher Learning, is at least partly responsible for his upcoming appearance in The Fast and the Furious 2.) I asked Mr. Hauser about playing a skinhead, about the underestimated The Hi-Lo Country, and about his once-estranged father, actor Wings Hauser.