by Bryant Frazer Breaking the Waves can make you queasy from its opening moments, when director Lars von Trier's name appears with the title superimposed over it, the title card swaying gently on screen as if it were photographed at sea. The effect is less subtle on home video than it is on a big screen, where you're not as aware of the edges of the frame, but the message is the same: suddenly, you're adrift, unmoored, alone.

by Bill Chambers SPOILER WARNING IN EFFECT. Movie pop art is enjoying a renaissance (cf Elephant, Eternal Sunshine of the Spotless Mind), of which Lars von Trier's savagely cathartic Dogville is the consummate centrepiece. This despite--and partly because of--outward appearances belying its status as a movie at all: Chalk outlines stand in for traditional sets, designating walls, fences, rosebushes, even the dog, Moses, of the titular locale, a pious community (is there any other kind in von Trierland?) situated in the Rocky Mountains circa Prohibition. A void surrounds the rectangle of pavement that constitutes Dogville--it turns white to indicate day and black to indicate night. One could be forgiven for momentarily mistaking Dogville for that fourth-wall-breaking production of Thornton Wilder's Our Town that aired on HBO last year; as Dogville's narrator, John Hurt is as thorough and intrusive a commentator as Our Town's own Stage Manager. 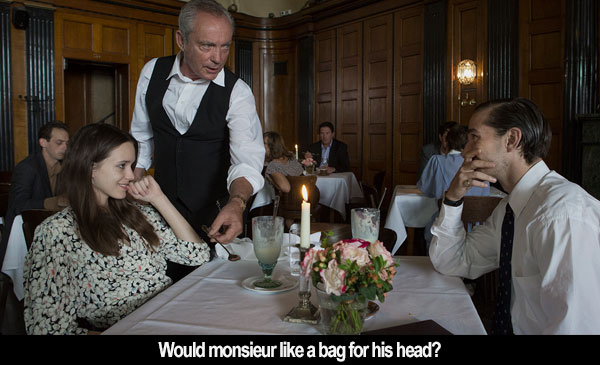 by Walter Chaw Dark and moody with a dash of post-modern relational philosophy, Ole Bornedal's Nightwatch (Nattevagten) is a taut and unusual thriller that has been remade by the same director into the English-language Nightwatch, starring Ewan McGregor, Nick Nolte, and Patricia Arquette. In its original Dutch-language incarnation (seen by over 15% of the entire Dane population), Nattevagten is lent a good deal of weight by a satisfying subplot involving the nature of love and the rites of passage young men endure to become men in one another's eyes. It sounds a little heady for what boils down to fairly typical serial-killer intrigue, but the uniformly fine performances, the uncompromising though tasteful direction, and the sharp screenplay (by Bornedal) combine to make the film something a little finer than what its barest plot synopsis would indicate. It reminds most of another foreign thriller largely ignored on American shores released in the same year, Anthony Waller's Mute Witness.

by Angelo Muredda Finely-tuned but incurious about most of what falls outside its blinkered gaze, A Hijacking is about as good as this sort of stripped-down procedural filmmaking gets--Akira Kurosawa's High and Low reconfigured for a telephonic showdown between Somali pirates and Danish shareholders. Only the second feature from Tobias Lindholm (who proves much more capable as a director than as the author of The Hunt's lazy allegorical punts about the concern-trolling parents of small-town Denmark), the film feels like the work of a yeoman who's in no hurry to be recognized as a visual stylist unless the material should merit such flourishes. Annoying as that no-frills approach can be in countless austere imitations of the Dardennes and Michael Haneke, it's more than welcome here in a film whose title might otherwise have ended with a gaudy exclamation mark. 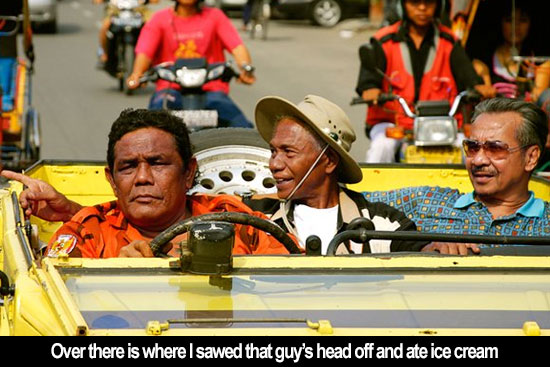 by Angelo Muredda Like Claude Lanzmann's otherwise incomparable Shoah, Joshua Oppenheimer's bracing documentary The Act of Killing reanimates a historical catastrophe without leaning on archival footage. In relying primarily on testimonials grounded at the site of violence, both films argue for a more radical than usual method of bearing witness to unspeakable genocides--in this case, the murder of nearly a million communists, intellectuals, and ethnic Chinese in mid-1960s Indonesia by a cadre of paramilitaries and gangsters who were backed by an American-funded military and subsequently never brought to trial. Yet as much as each project seeks to drag a monstrous past into the light by shooting at the present scene of the crime, Oppenheimer's work is given an even more surreal kick by virtue of the incredible status still afforded to members of the killing squads, politically-connected goons who openly boast of their murders to anyone within earshot, including the film crew. 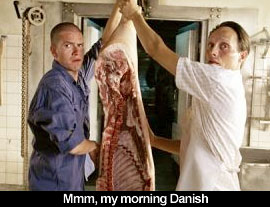 by Angelo Muredda A Royal Affair isn't exactly Barry Lyndon, but as period pieces go, it's surprisingly robust, the rare costume drama that takes a genuine interest in how the unruly personalities of rulers and politicians determine a nation's political outcomes as much as the ideologies they represent. It doesn't seem so promising at first, beginning as it does with a title card that sets the scene with ominous overtones. "It is the Age of Enlightenment," we're told in the tasteful font of "Masterpiece Theatre", and while the rest of Europe has gone through a massive philosophical and ethical shift with respect to its perception of peasants and landed gentry, Denmark has remained an outpost of the old, thanks in no small part to the conservative court that pulls the strings of mad young King Christian (Mikkel Følsgaard, Best Actor winner at Berlin). Enter his blushing new Welsh bride and our narrator, Caroline (Alicia Vikander), a revolutionary intellect--her book collection doesn't pass the Danish board of censors--who flounders in the country she now rules until things are livened by Johann Friedrich Struensee (Mads Mikkelsen), a German doctor and secret pamphleteer of the Enlightenment sent to bring sense back to the erratic King.

by Angelo Muredda The Hunt hinges on a misunderstanding, a nasty story born of a child's bruised ego and happily seized by a pack of overeager concern trolls calling themselves adults. But there's a whole other story about misunderstanding to be spun from how the film will surely be received in different quarters as either a devastating portrait of small-town life or a grim black comedy. That one is all on director and Dogme 95 cofounder Thomas Vinterberg. While it's always dicey to ascribe authorial intent, Vinterberg seems to waffle between middlebrow tragedy and scattershot satire not out of some postmodern commitment to walking the edge of irony, but because the script can't really sustain a further push in either direction. That makes The Hunt a provocative film, sure, but also a bit of a lazy one--a conversation starter without much follow-through.

by Walter Chaw David Michôd's Animal Kingdom respects its audience, a rare commodity during the best of times. The film flatters us by leaving exposition and backstory to our knowledge of anthropology--in fact, Animal Kingdom is best indicated by its unwavering reserve--a reluctance, almost--to say too much when slow, fluid tracking motions and static, medium-distance establishing shots may suffice. Consider a frankly gorgeous tableau late in the film as three people meet in Melbourne's National Gallery of Victoria: framed against an open space, Michôd allows an extra beat, then another, before continuing with his family gothic. The story isn't an afterthought, but the dialogue, however minimal, seems to be. The picture's told through its actions and its images and, in that way, reminds of a Beat Takeshi film, of all things, what with its focus on criminality and its enthralling slowness. If there's another indie demiurge to which Michôd pays obeisance, it's Michael Mann--and the success of the picture (as shrine to masculinity, as introspective character study) suggests that cribbing from Kitano and Mann, if it's as successful a larceny as this, can be successful in no other way.