by Walter Chaw It's a corker. Playing exactly like another instalment in the "Call of Duty" FPS videogame franchise, Iranian-born Babak Najafi's London Has Fallen is a gobsmacking, jingoistic, political exploitation horror-thriller that traffics in contemporary paranoia with unusually exuberant brutality. It loves killing people. Loves it. The picture's packed full of xenophobia and all the other insidious forms of fear infecting our modern apocalypse: hatred of the Other, terror of invasion, terror of the self. It fashions what is essentially another 28 Days Later sequel by recasting the rage zombies as Islamic Fundamentalists, simultaneously creating in the process a recruitment video for bellicose young men in the West wanting to kill Arabs--and one for bellicose young men in the Middle-East wanting to kill Americans. Tidy. London Has Fallen is propaganda with a budget, a few recognizable faces, and some directing chops to boot. I'm equally glad and appalled it exists. I wish I were more surprised that it does.

by Walter Chaw After the remarkably tough and uncompromising Rambo and the almost-unbearably poignant and transparent Rocky Balboa, it'd be fair to nurse a healthy anticipation for Sylvester Stallone's paean to the '80s blockbuster, The Expendables. Alas, what's on display owes more to Stallone's Rhinestone than to his venerable Rocky series. A redux of Wild Hogs as embarrassing, boring, and ineptly- shot and edited as the original, The Expendables even ends the same way, with geezers riding off into the sunset on the backs of their four-fifths-life-crisis choppers. Tattoos and plunging v-neck Ts the rule of the day, it's more Rogaine commercial than action movie, making fun of itself in the way that old guys who are genuinely insecure about their age make fun of themselves. It's awkward. It's also, in addition to being almost entirely free of excitement or a single line of dialogue that isn't some syncopated mix of grunting and tough-guy cliché, maybe a no-shit adaptation of Eugene Ionesco's "The Bald Soprano". That's the only way to explain how it is that a film tits-deep in dialogue could have not one exchange that makes any sense whatsoever. The way the movie's put together, too, is a model of the Theatre of the Absurd's occasional dabbling in non sequiturs--something The Expendables seems to address at one point when the horsey-looking, freshly-waterboarded damsel (Giselle Itié) wonders how Stallone's Barney has magically appeared as her saviour in a Caribbean (?) dictator's dungeon. "I just am!" mumbles Barney. Who am I to argue with that? 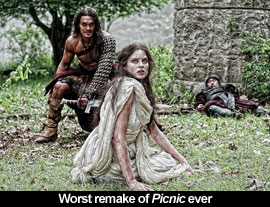 */****
DVD - Image B+ Sound A Extras B
BD - Image A Sound A+ Extras B
starring Gerard Butler, Lena Headey, David Wenham, Dominic West
screenplay by Zack Snyder & Kurt Johnstad and Michael B. Gordon, based on the graphic novel by Frank Miller
directed by Zack Snyder

by Walter Chaw There's an idea in the ancient world about a "beautiful death," achievable for the warrior only in mortal, one-on-one wartime combat--an idea that may have contributed to the length of the Trojan siege, and an idea vocalized by one of the captains serving under Spartan King Leonides (Gerard Butler) in Zack Snyder's 300. Based on Frank Miller's graphic novel of the same name, the film betrays a lot of the same macho aesthetic as Robert Rodriguez's adaptation of Miller's Sin City--but rather than content itself with the literally bestial terms of glory in the masculine psyche, it makes a play for allegory and equivocal morality (of all things) in the valorization of Sparta and the romanticization of a crushing military defeat. It's not that Leonides is seen martyred in the end in a tableau explicitly meant to evoke the passion of St. Sebastian, but that he goes out pining for his wife like a lovesick hamster, thus completing 300's devolution from remorseless Spartan militarism into gushy democratic idealism and all manner of liberal maladies. There's little profit in establishing the rules of this universe as uncompromising and brutal (it opens on a field of infant skulls--victims of a Spartan culling ritual of its own kind) if its intentions split time between justifying, in non-chest-beating terms, the decision to pit three-hundred against thousands while denying the Spartans their individual moments of "beautiful death" in favour of some collective date with pyrrhic immortality. History suggests that the Spartans, having exhausted their arms, died scratching and clawing with their bare hands; 300 suggests they died calling for their mothers and wives.

by Walter Chaw Though I've never seen Python I, I had a surprisingly easy time following Python 2, a direct-to-Sci Fi Channel CGI worm-fest that at least has the distinction of featuring a terrible-looking monster no worse than the one in its higher-profile cousin, Anaconda. It seems that a huge snake (two of them, in fact, making the title "clever") is running around in cheap-to-film-in faux Russia, chomping digital comrades to the accompaniment of mirth-inspiring crunchy sound effects as a heroic CIA agent (Billy Zabka, who appears to also have been in the first of the Python epic) is sent to capture the beastie.