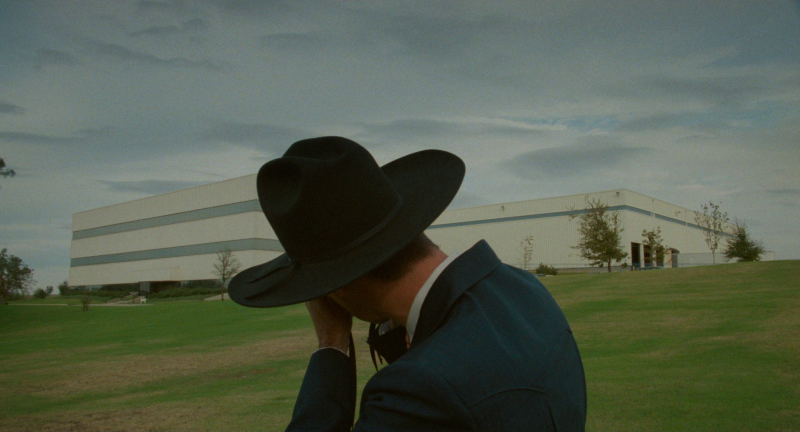 by Sydney Wegner For as long as I can remember, Talking Heads have been my favourite band. They provided the soundtrack to road trips and living-room dance parties; theirs were the cassettes in my first Walkman and my first car. Among the weird stuff my brother and I cycled through during our blessed hours in front of the TV was a VHS collection of their music videos, which we must have played a thousand times. And then there was True Stories, a special favourite, something we never got sick of. I grew up in Austin but lived about ten miles from the centre of town. Our house was on an acre of land surrounded by untamed woods; we spent our time riding bikes and climbing oak trees and rolling in mud. It felt like we grew up in a small rural town, and those first 12 years of my life formed my idea of Texas. Some of my favourite memories are from road trips to visit my grandparents in San Antonio and summers spent camping our way to New Mexico and Arizona, driving for hours through land where the only evidence of civilization was the road we were on. As an adult, when I visited Utah I thought the mountains might fall and crush me. In Washington, the trees formed a picturesque prison. Only in Texas can I breathe. It's a place where the world feels so big and flat that I can almost sense myself hanging onto the edge of the earth. What enchanted me about True Stories so much as a child is, of course, its music and its humour, but also that it captured this openness in a way that felt comforting and beautiful, very much unlike the desolate wasteland Texas appears to be in so many other movies about the state. Sometimes I wonder if it confirmed the Texas I already knew, or helped shape it for me. It never seemed like a coincidence that True Stories was released the same year I was born. 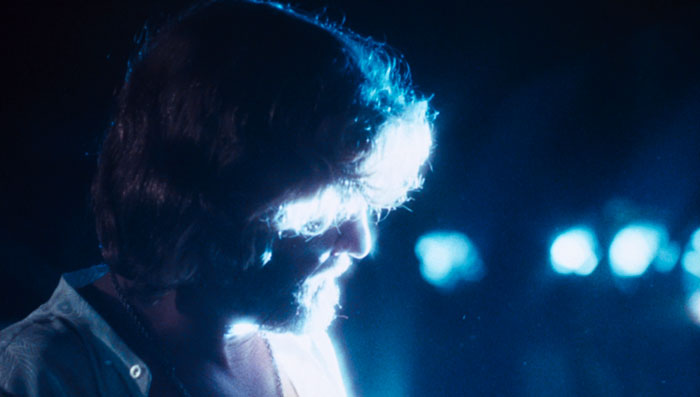 by Sydney Wegner Two-and-a-half hours ago, I didn't care one bit for Barbra Streisand. As a mega Kris Kristofferson fangirl, I was grudgingly willing to endure her performance alongside him in A Star is Born. I grew up with people who wouldn't be caught dead listening to her music; I'd never seen any of her movies. All I knew of her besides the larger-than-life fame and cloned dogs was her legendary ego. Diva, control freak, crazy, stuck-up--many of these distasteful adjectives stemming from the troubled production of A Star is Born. Despite its awards and box-office success (it was the third highest-grossing film of 1976), the years have not necessarily been kind, and almost every recent review has mentioned her presence as overwhelming the movie. That is, the lack of chemistry between the leads, the way the movie skips over chunks of badly-needed character development to make room for her songs, and the fashion disasters are frequent complaints with one common target: Babs. 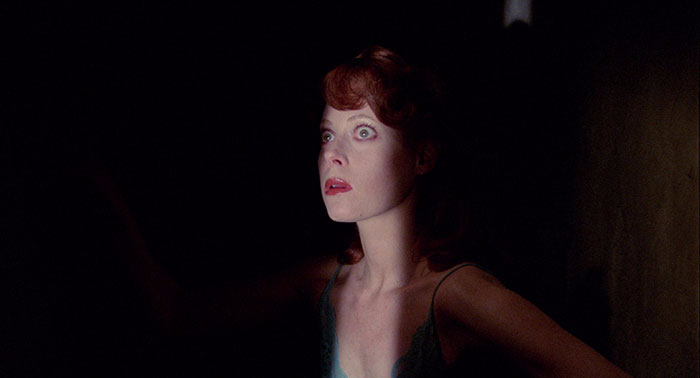 by Sydney Wegner As co-writer/director J.S. Cardone insists, The Slayer is not quite a slasher. More than titillate or thrill, it seeks to unsettle, to dig at the viewer with emotion rather than throwaway jump scares. The set-pieces have the imaginative gore of any good slasher, but a sadness permeates the film so deeply that all the dorky banter and melodramatic murders in the world can't disguise it. The slow pace and heavy emphasis on the psychological trauma of its lead doomed The Slayer to be drowned out by the deluge of early-'80s slashers, and most viewers who might have been drawn to the carnage implied by the lurid title and poster were likely left unsatisfied. The Slayer opens with a nightmare: Wandering wide-eyed through a house, the protagonist, Kay, is strangled by long, inhuman hands encrusted in slime and blood. The opening promises the violence and sex (she's of course wearing a classic skimpy nightgown) of the typical slasher variety, but pay closer attention to the close-ups of a chiming grandfather clock and the beautiful orchestral score--those signal the kind of movie you're in for. When Kay startles awake from this dream, sweaty and terrified, her husband stands above her. He starts talking to her about something innocuous, but the camera, peering up from a jarringly low angle, makes him seem ominous and oppressive. This, too, is a tell. Kay will spend the movie trying to convince the other characters that what she dreams is real, and they will brush her off, and then they'll die. They aren't a comfort to her anymore, because she is far gone to a place where everything is at the wrong angle. 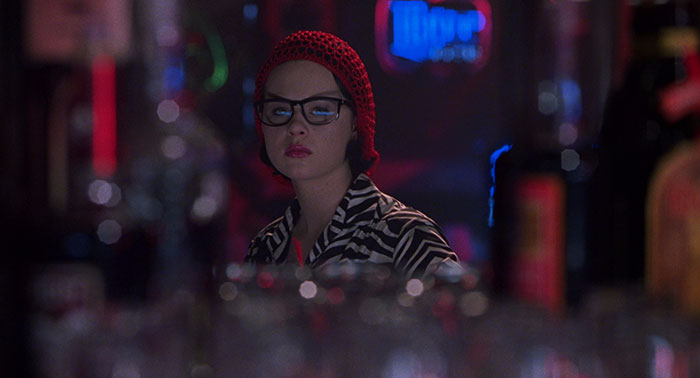 by Sydney Wegner Say "privilege" in 2017 and you will inevitably trigger an allergic reaction, particularly if you precede it with the word "white." "Privilege" feels inflammatory and overused, a casualty of the movement for basic human decency snidely referred to as "PC culture." For those to whom it applies, it can be hard to confront and accept--especially in America, where the idea that anybody got anything by luck alone goes against everything we've been taught is admirable and pure. But in order to use your unjustly-granted powers for good, the knee-jerk defensiveness needs to be agonized over and dealt with. As I've matured, I've learned that you can't grow without feeling like garbage, that the concept of learning from your mistakes often applies to learning from the ones you didn't make intentionally. Now that being a better person seems to have become a radical political act, it's something that is on my mind a lot.

by Sydney Wegner The final frames of Madhouse are a title card with a George Bernard Shaw quote: "...life differs from the play only in this...it has no plot, all is vague, desultory, unconnected till the curtain drops with the mystery unsolved." In that instant, in one of the most beautifully-executed "middle-finger to my haters" moves in cinema, criticism of Ovidio G. Assonitis's 1981 clusterfuck is rendered irrelevant. Sneaking that in at the end rather than putting it at the beginning is doubly hilarious, as you've just spent an hour-and-a-half trying to grasp onto this ungraspable thing, only to have all your hard work flushed away in a second. If your movie doesn't make sense, it's because living doesn't make sense; case closed. Our own plots are never resolved, people flit in and out of our lives without us ever truly knowing them, our familial relationships are tangled and it's sometimes impossible to figure out where any animosity began. We think we understand people, but it's rare that we truly do.

by Sydney Wegner When a baby is born, a universe of possibilities opens wide in front of them. They don't yet know how to move or talk, but they hold within them the capacity for good or evil and everything in between. No matter what, parents look at their children in those first moments of life and think, Here in my hands I hold a doctor, a scientist, a legendary artist, a Nobel prize winner, an Olympic gold medallist. Despite my own failures and shortcomings, I have given birth to a life that may manage to overcome all the shit I will put them through to become someone infinitely greater than myself. Maybe it will influence the lives of millions to make the world a better place. Though parents have a great effect on how they turn out, ultimately they are their own unpredictable and uncontrollable person. We know they'll change something, that they will affect the people they come to know, that this one small thread they represent will alter the vast human tapestry in some way. Of course, we always hope it will be for the best. 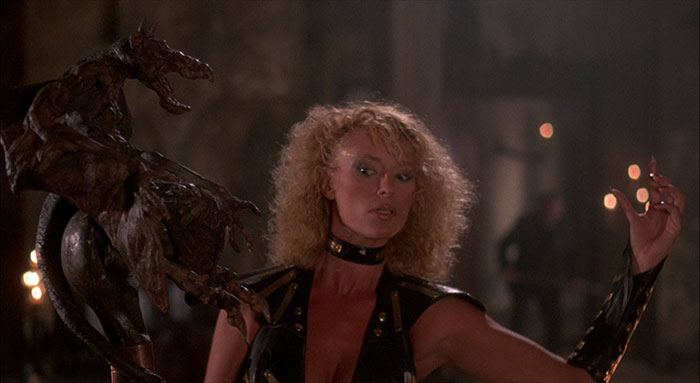 by Sydney Wegner Let's get this out of the way first: Howling II--a.k.a. Howling II: ...Your Sister is a Werewolf, a.k.a. Howling II: Stirba - Werewolf Bitch--is a mess, an entity that refuses to be judged on any conventional, objective scale. Though originally intended as a comedy, the studio sliced it up to come across as more of a horror movie, and the bizarre result is a tone that changes with each scene. Half new-wave werewolf erotica, half Hammer horror, Howling II's themes of grief and rebirth and female sexual empowerment swirl together in a campy, indecipherable whirlwind. Just as things begin to approach being scary, they're kicked right back down with a novelty wipe effect or a cartoonish facial expression. Christopher Lee, playing werewolf hunter Stefan Crosscoe, was allegedly so appalled by the acting of his co-stars that he spent much of his time offscreen trying to flee the planet using only the power of his mind. You can feel the ennui behind his eyes with every line delivery, yet the attention he commands is undeniable. In a way, his performance is a microcosm of the entire film. The opening shot finds Lee suspended in a sea of stars, reciting werewolf legend from a book, and that is probably the most normal thing that happens in Howling II. It's ridiculous, it's stupid; it's occasionally embarrassing and endlessly fascinating.

by Sydney Wegner Earth is so full of tiny things, an infinite variety of life. You might step on fifty species you've never heard of on your walk to work, and most of us will spend our lives in ignorance of these obscure wonders. But for every known organism, one can safely assume there is a fan club somewhere devoted to studying it. The Creeping Garden wants to share that devotion with the world while attempting to answer the all-important question: Who are these fanatics, and why do they care? Says co-director Tim Grabham on the Blu-ray's commentary track, "What is a slime mould?...It depends on who you are and what you're looking for," an offhand musing that could have been the film's tagline. Above all, this is a documentary about looking. 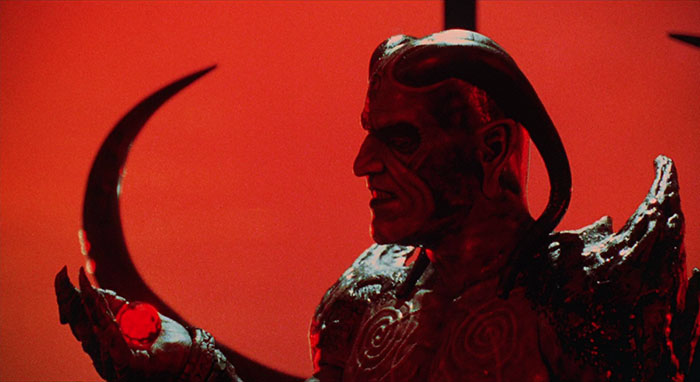 by Sydney Wegner The Wishmaster saga begins with a quick infodump about angels and demons from narrator Angus Scrimm, the folklore giving way to a lush array of reds and purples and sandy earth tones as a sorcerer forges a magic red gemstone over the opening credits. In 1127 Persia, something is wreaking havoc on a crowded square; a skeleton rips its way out of a man's skin and walks around to join several other horrifying atrocities. The sorcerer (Ari Barak) pushes his way through the screaming crowd to the King (Richard Assad), who's being advised by a Djinn (a.k.a. the Wishmaster, played by a ferociously campy Andrew Divoff) that he must make a third wish to stop the violence. But the sorcerer manages to trap him in the gemstone, stopping the King before his third wish can grant the Djinn the power to rip through dimensions and unleash his Djinn brethren onto the earth. This prologue sets up a world of magic and fantasy and folklore the series never quite re-establishes. While the ancient imagery is vaguely referenced hereafter, the world of Wishmaster won't feel this sensual or mystical again.