by Walter Chaw A Bavarian Big Night, Sandra Nettelbeck's Mostly Martha joins a romantic-comedy premise with a lost-child scenario, setting it all to a leisurely pace and framing it with an eye for the handsome. Its sightlines as crisp and clean as the dishes chef Martha creates in her immaculate kitchen, the picture is as relaxed a viewing experience as any this year--a dish without many exotic ingredients (like a good Salmon dish, the film tells us), but just enough substance to forgive the froth.

Sundance '20: Once Upon a Time in Venezuala

by Walter Chaw My favourite part of Anabel Rodríguez Ríos's pretty documentary Once Upon a Time in Venezuela isn't the mad woman who has a shrine to Hugo Chavez and forces people to touch a giant, door-sized poster of him before entering her room, nor is it the two old men who cry while talking about the way things used to be in their little floating/stilts-bound town of Congo Mirador before playing pointed tunes on an old rat-box guitar. No, my favourite part of Once Upon a Time in Venezuela is how it's loosely structured around a doomed election that has no real bearing on this tiny place's inevitable disintegration. There's a lot to pull from this idea that the works of Man are but a speck of dust and all that--a mote in God's design, right? Some of the locals, especially one garish busybody, are also displeased with the quality of education their children are receiving while the world falls apart around them. It's fun to watch people without a future try to plan for the future. And then you realize the film is talking about us.

Continue reading "Sundance '20: Once Upon a Time in Venezuala" »

by Walter Chaw What Justin P. Lange's hyphenate debut The Dark, a variation on Let the Right One In, lacks in freshness it makes up for in look and vibe. Better, probably, as a short film, it opens strong with a bad man on the run, Josef (Karl Markovics), stopping at a convenience store, where he gets the usual warning about going into the woods. Lange subverts convention immediately, and then goes to the remote house in the wood where the monster lives. Said monster, a little-girl ghoul named Mina (Nadia Alexander), has been murdering the wayward and eating them for some time--but she stops short of harvesting Josef's young ward, Alex (Toby Nichols), whom Josef has kidnapped, groomed, and, naturally, abused. What follows is the relationship between Mina and Alex as it develops into a kind of twilit co-dependency based on the confluence of their respective traumas. The problem with expanding shorts to feature-length is that it's often done on the premise that what worked well in shorthand would work better with extended narratives and backstories. What's murky is sometimes best left that way. The Dark is elegant, even beautiful, when it regards Alex and Mina silently in their brief space together. Doom hangs over them and it's understood that there's no future for them, but the film captures those delirious moments in a child's emotional life when it seems like forever is possible. Yet whenever it leaves that space, be it through flashback or some other external contrivance, its deficiencies in script and performance become clear. Still, even with a bit too much fat left on the bone, The Dark is a promising debut for Lange.

by Bill Chambers About five seconds into John Woo's Man Hunt (no relation to that Fritz Lang movie with George Sanders in a cave), there's a freeze-frame. Followed shortly by another. It's glorious. Digital filmmaking has no doubt made it easier for Woo to be himself, as has being back in Asia: Hollywood never did warm to his Peckinpah flourishes, nor his melodramatic flair. But something is off in Man Hunt, which finds Woo returning, a touch desperately, to the Heroic Bloodshed genre in the form of a gloss on The Fugitive. (Officially, it's a remake of a Ken Takakura vehicle variously known as Manhunt and Hot Pursuit.) Chinese Du Qiu (Zhang Hanyu) is a hotshot lawyer for a pharmaceutical company that frames him for the murder of an alleged lover (Tao Okamoto, bestowing her iconic look on a role that doesn't thank her in return) to protect its secrets; Japanese Yamura (Masaharu Fukuyama) is the hotshot Inspector sent after Du when he escapes custody. Du repeatedly eludes Yamura's clutches, but over the course of the chase they build a rapport that transcends lawful and cultural barriers and, à la Hard-Boiled, unite against a common enemy, corrupt CEO Yoshihiro Sakai (Jun Kunimura). I should mention the two female super-assassins hot on Du's trail, since Woo's daughter Angeles plays one of them. For better or worse, this is personal filmmaking.

Telluride '16: Into the Inferno

by Walter Chaw About 20 minutes of Werner Herzog's 104-minute Into the Inferno is recycled footage from his own Encounters at the End of the World. Another 20 is a strange diversion into the discovery of a hominid skeleton in Africa featuring a particularly excitable paleoanthropologist. This leaves roughly an hour for the cultural/anthropological examination of cults sprung up around active volcanoes the movie promises, and at least a portion of that is devoted to the amazing footage captured by the late Katia and Maurice Krafft, who, like Kilgore on the beach, never thought they could be killed by the fire. They were. It's the kind of gallows revelation that is the purview of Herzog's mordant documentaries. He is at least as good at this as he is at his more traditional fictions. But Into the Inferno seems tossed-off and unfocused, and not even a partnership with affable British vulcanologist Clive Oppenheimer can help Herzog ground this material. A previous incarnation of the filmmaker would find him stealthily building a profile of a man who spends his life staring into magma pools, perched at the edge of pyroclasmic calamity. This Herzog interviews a few chiefs of island cultures, the most fascinating of whom has decided that an American airman lives in the lava and will one day emerge to shower the villagers with a bounty of consumer goods.

Continue reading "Telluride '16: Into the Inferno" »

by Bill Chambers A significant source of Blind Spot. Hitler's Secretary's power is the au naturel form it takes. There are no re-enactments, there are no such visual cues as photographs or stock footage; there isn't even any underscore--only the talking head of Traudl Junge, who, with her rotating cluster of sweaters and ascots, is the film's aesthetic. Directors André Heller and Othmar Schmiderer (Heller interviewed, Schmiderer shot) either believe Junge to be so compelling a presence as to challenge the need for newsreel aids, or fundamentally appreciate that they risked depersonalizing Junge's fresh, intimate perspective by going the History Channel route. I only skimmed the press notes (which are rather regrettably written: "Like Adolf Hitler, [Heller and Schmiderer] were also born and raised in Austria," begins an introduction to the filmmakers) to keep from cheapening Blind Spot's enigmatic approach--that ambivalence--for myself: The film casts a spell as fragile as that of an ILM spectacle. 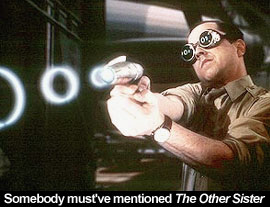 by Walter Chaw For me, the most intoxicating visions of the future are those in which we're drowning in an ocean of our past--garbage, wreckage, Romes burned to a cinder and heaped against the new Meccas of our collective tomorrows. Star Wars proffered a kind of aesthetic of dirt that appealed: a wonderland where the spaceships looked like they'd been flown and there were places like Mos Eisley that reeked of stale liquor, sawdust, and cigarettes. (The distance that George Lucas has gone to disinfect his grubby vision of the future is the same distance that esteem for the franchise has fallen amongst all but the most die-hard chattel.) Among the spearhead of a group of artists who redefined the science-fiction genre in film the same way that Sergio Leone and Sam Peckinpah scuffed-up the western in the Sixties, Ridley Scott evolved the idea of a functional future, with his Alien and Blade Runner serving as visual echoes of T.S. Eliot's broken stones and fragments shored against our ruins. Terry Gilliam defined the aesthetic when describing his rationale for the look of Brazil (1985): he wanted it to seem as though the whole century had been compacted into a single moment. The timeless "someday soon" that is always just around a corner that never comes. 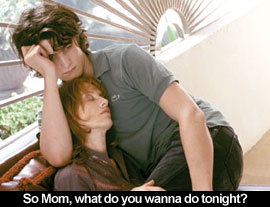