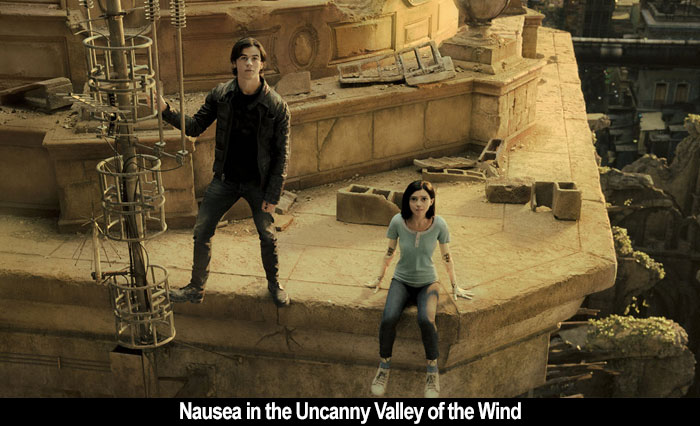 by Walter Chaw There's one genuinely good thing about Alita: Battle Angel and it has to do with a cameo by Jeff Fahey as a guy who really likes dogs. It's good because it's good to like dogs, but it also reminds of Fahey's villain from Silverado, who has a pretty great line about a dog; and it's good to be reminded of Silverado. In other words, the one genuinely good thing about Alita is there's something in it that, on purpose, reminds me of a good movie. The rest of it is noisy juvenilia taking place in the Sharkboy and Lavagirl universe--a YA disaster featuring the usual mysterious girl with the secret past who turns out to be a super-soldier and yadda yadda yadda. Jesus, does it break no new ground. Scrapper-cum-cyborg-engineer-slash-bounty-hunter Ido (Christoph Waltz, desperately hoping QT picks up the phone again) discovers the "core" of Alita (voiced and mo-capped by Rosa Salazar), basically her Victorian locket-silhouette parts, in the junkyard of a floating city housing the elites of this world ("300 YEARS AFTER THE FALL") and immediately grafts it to his dead daughter's unused robot body, because in addition to the movie being structurally unambitious and curiously sexist, it's also defiantly ableist. "I made her fast little legs," Ido says, mournfully, and then we get a flashback to the dead little girl being punched out of her wheelchair by a cyborg Ido created to compete in a future-game called "Rollerball"--I mean, "Murderskates." I don't know. Who cares. It's on roller skates and cyborgs do it. Oh, and they kill a dog.

by Walter Chaw Demián Rugna's Terrified is as if the ghost-hunter sequence in Poltergeist were the entire movie and instead of the one house, the entire street were haunted. It is, in other words, a lot of fun. The picture opens, as these things must, with paranormal shenanigans, which in this case involve spectral voices coming out of the kitchen pipes, leading to one of the great shock reveals in recent memory. Really. It's a kill so radically cool and unexpected that it's at once horrible and deliciously uncanny. Simultaneously, a next-door neighbour seems to have gone missing and in flashback we see what's been happening to him. Then the son of poor single mom Alicia (Julieta Vallina) gets run down in the street before showing up a few days later, black from rot and stinking of the grave, to sit quietly at the dinner table. I love the image of this horrible corpse seated in a sunny dining room while everyone stares at it. You can see the gears turning. And then its milk spills and I almost stood up and left. These abominations trigger the ex-cop living with Alicia, Funes (Maxi Ghione), to join forces with a trio of elderly academics--Jano (Norberto Gonzalo), Albreck (Elvira Onetto), and Rosentok (George Lewis)--to stake out the three houses in the hope of figuring out what's plaguing this quiet suburban street.

by Walter Chaw In one of a series of largely-improvised exchanges about the mystical hold of the tango on the spirit of Argentines, a crusty veteran confides in enigmatic Yankee hitman John J. (Robert Duvall, also writer-director) that the tango, among absolutes such as love and hate, is life. In Assassination Tango, the titular dance is also the metaphor for the desire to find balance between the brutish and the sublime or, failing that, to provide a strict framework within which the brute can prowl. (A visit to a caged panther in a Buenos Aires zoo becomes the visual manifestation of the idea as well as oblique reference to Kafka's "The Hunger Artist," the hero of which searches, like J., for sustenance.) The tango is the urgent pull of ritual that binds animal sexuality into the meticulous structure of dance, working on the literal level as doppelgänger to John J.'s carefully-controlled, gradually encroaching chaos and on another level as metaphor for a filmmaker seeking equilibrium between personal crisis and professional ambition at the end of his career. It's rationale enough for a picture so often interested in frustrating narrative to the benefit of the richness of its palimpsest; if ever there were a film that lives entirely in its subtext, Assassination Tango (even its title a semantic conundrum) is it.

by Walter Chaw Argentine director Hector Babenco's ninth film, Carandiru is his fourth that, at least in an ancillary fashion, has something to do with prison (the others being Lució Flávio, Pixote, and Kiss of the Spider Woman), and it's easily the least of them, justifying the men-behind-bars tropes and queen stereotypes by hiding behind its ostensible basis in Dráuzio Varella's non-fiction fiction. The film was adapted from a book that is based on a true story, the degrees of separation from reality dramatic enough as to render its hero doctor a smirking, condescending Virgil in a stock Inferno peopled with an all-too familiar panoply: smart con; murderous con who finds God; artistic elderly con; brutal street con; possibly innocent naïf con; philosophical con; and so on into nausea. The picture makes mistakes early and often, deciding to condense hundreds of stories into a few basic sketches and then choosing to recreate each of the pastiche criminal's life story in vignette flashbacks that do more to celebrate the brassy hedonism of São Paulo than underscore its underbelly of desperation and criminality. That carnival atmosphere comes off as a fragrant bouquet of patronizing pap that revels in its sordidness yet feels curiously naïve--"Oz" by a creative team that doesn't appear to know that the bar on prison dramas has been raised since Brute Force.

by Walter Chaw What may be the best David Mamet film since House of Games, Argentine director Fabián Bielinsky's debut Nine Queens is a mannered, serpentine caper thriller that places its trust in the able hands of a troika of talented performers. Baby-faced Juan (Gastón Pauls), ferocious Valeria (Leticia Brédice), and twitchy Marcos (the gifted Ricardo Darín) find themselves involved in a plot to sell a sheet of counterfeit stamps (the titular "Nine Queens") to Spanish collector Gandalfo (Ignasi Abadal), himself on the lam for some sort of fraud. Delightfully ludicrous and self-contained in the way of The Sting, the picture is a Rube Goldberg/Spanish Prisoner device translated into small-time cons and sin-stained grifters as they grind and smash into each other like sharks in the green noir bucket of Buenos Aires.

Plata quemada
**½/****
starring Eduardo Noriega, Leonardo Sbaraglia, Pablo Echarri, Leticia Brédice
screenplay by Marcelo Figueras, Marcelo Piñeyro, based on the novel Plata Quemada by Ricardo Piglia
directed by Marcelo Piñeyro
by Walter Chaw Pushing the submerged homoeroticism of Strangers on a Train to the surface, Burnt Money's homage begins with Jean-Pierre Melville's genre cool and Hitchcock's cigarettes and lighters at a carnival and ends with a certain Wellesian noir seediness (complete with The Lady From Shanghai's ill-fated passion, Touch of Evil's corrupt officials, and even Citizen Kane's totemic paperweight). Burnt Money is deliriously beautiful to look at--all pale greens and mute browns--but its overt politicism in the closing moments begins to dispel the film's magic in favour of over-heated parable. It's an expert genre piece that tries to bear the brunt of all of Argentina's national cynicism and economic corruption (a leaden socio-political platform reflected by its title), and despite his cineaste smarts, director Marcelo Piñeyro just isn't up to the task.

by Walter Chaw SPOILER WARNING IN EFFECT. Woody Allen's been on something like a two-decade slide, so if there's a little voice in your head telling you that the last thing you need to see is an Argentine version of a Woody Allen "where's daddy" neurosis opera: listen to it. Daniel Burman's Lost Embrace (El Abrazo partido) is an interminable slog through the congested headspace of one Ariel Makaroff (Daniel Hendler), an insufferable, navel-gazing Pol expat living out his self-loathing strut and fret in the ridiculous family lingerie shop of a cut-rate shopping centre. (Yeah, it's Scenes from a Mall in Spanish.) Burman likes breaking the fourth wall, likes humourless inter-titles that separate his film into a dozen awkward sketches, and really likes dense monologues about, essentially, why no one is ever happy. The extent to which you will cotton to Lost Embrace has a lot to do with how much you enjoy wallpaper narration and old Jewish-Polish grandmothers singing homey folk songs square to the camera--how much you delight in Jewish mothers nudzhing their schlemiel sons before divesting their aggressively middle-class closets of ancient infidelities set against intra-mall flings with an Internet café bimbo. Ennui, listlessness, and gab gab gab, Lost Embrace earns the occasional moment of interest or topicality in stuff like a semi-amusing interview Ariel endures before the Polish consulate (during which he expresses admiration for the recently-deceased Polish Pope), but the film spends most of its goodwill on masturbating with a furious, chafing intensity. Oh, and it's mawkishly sentimental, too. 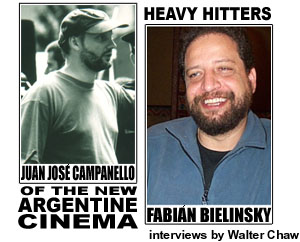 April 15, 2002|The film industry in Argentina reached its pinnacle in the 1930s and '40's when five-thousand artisans produced an average of forty-two films annually, each of them honouring popular and political themes primarily interested in social criticism. The prohibitive censorship of the first Peron presidency in 1943, however, precipitated the decline of the Argentine movie industry by forcing native films to turn their backs on the homegrown issues that spoke to the common audience. As Argentine cinema steadily lost viewership, foreign product (mostly from the United States, natch) gained a large foothold in the Argentine market. The problem eventually became so bad that Argentina tried to curb the influx with the Cinema Law of 1957, which, while not doing much to stem the influx of Yankee product, established the Instituto Nacional de Cinematografía to provide education and funding.

by Walter Chaw Restaurateur Rafael (Ricardo Darín)--divorced, paunchy, successful--has a stress- and sweets-inspired heart attack at the age of forty-two, prompting him to reconcile with his estranged mother (Norma Aleandro) and consider selling the family restaurant, and forcing him into a reconsideration of the blasé attitude he has towards his beautiful girlfriend, Naty (Natalia Verbeke). An exhausted contrivance to push a selfish and unpleasant man towards a resuscitation of his wasted life, Juan José Campanella's Son of the Bride (El Hijo de la novia) adds to the "cardiac arrest as a means to mid-life crisis" trope such overly manipulative and sentimental movements as an adorably Alzheimer's afflicted mother, an impassioned monologue about the emptiness of organized religion in the lives of the truly pious, and the return of a childhood pal, Juan Carlos (Eduardo Blanco, doing his best Roberto Benigni), whose own misfortunes cast Rafael's into stark relief.