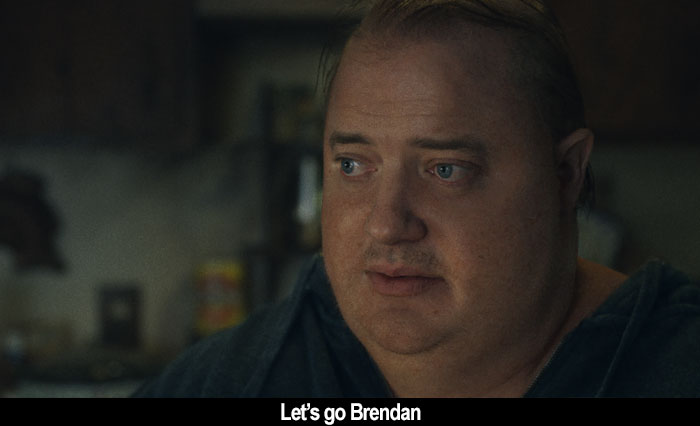 by Walter Chaw The Whale is the first Darren Aronofsky film that lands for me the way his work often lands for others. It feels like much ado about very little, and though there are obvious things to recommend it, its central message, however well-taken, seems poorly served by the substance and execution. Most of the blame goes to screenwriter Samuel D. Hunter, author of the same-named play on which the film is based, for writing a trio of women characters meant to represent the mother, whore, and virgin but who mostly represent a uniform wall of shrill, lacerating rage. The Whale feels like the product of inexperience: a song by The Smiths turned into a movie in all its grandiloquent, hyper-literate (to the point of self-parody) self-pity. It's about the last five days in the life of online English comp teacher Charlie (Brendan Fraser), a morbidly obese, largely couch-bound shut-in suffering from congestive heart failure brought on by years of unchecked food addiction incited by the suicide of his partner. If that were all (and certainly that's enough), we'd have ourselves a classic. But it's not all. There's an evangelical missionary named Thomas (Ty Simpkins) who comes to the door to sit with him as he's popping off the first of what appears to be a series of heart attacks; Charlie's estranged daughter, Ellie (Sadie Sink), who is quite possibly Satan himself because this film is at some level about how anyone can be redeemed and so provides a demonic straw girl to prove it; pissed-off caregiver Liz (Hong Chau), who--it's weird to say this--has a bit too much backstory; and Charlie's alcoholic ex-wife Mary (Samantha Morton), who wants to listen to Charlie's breathing for some reason. The Whale is at once overwritten and underwritten, which is not uncommon. What sinks the ship, as it were, is that it's never particularly well-written--something it just can't surmount. I think the real movie is in the five days before the last five days, but what the fuck do I know?