by Walter Chaw Sebastián Lelio's The Wonder aspires to the scabrous experimental satire of Lars von Trier's Dogville, down to establishing itself on an open soundstage, but it doesn't quite have that film's intellectual rigour, nor its nihilism. Some would say that's to its credit. I guess I'm glad I didn't feel like swallowing a shotgun after The Wonder, but I do, er, wonder if its effectiveness isn't undermined by its essential hopefulness. I had a similar problem with co-screenwriter/source novelist Emma Donaghue's Room, which treats severe trauma as not only a thing small children don't suffer for some reason, but a thing small children are designed to heal in adults. It's appalling. Evidently, Donaghue is stuck on a theme, as The Wonder is also about sexual abuse and the imprisonment of a young woman. It's also, again, about a child tasked with redeeming the soul of a family and a society. But as the film ends right at the point the real consequences of the atrocities it portrays are about to bloom, we can at least imagine that its happy ending will be marred by the howl of PTSD's florid demons. The Wonder is an improvement over Room as well in the sense that it's a full-frontal attack on the patriarchy and its repulsive handmaiden--organized religion--rather than a somewhat tepid thriller with mishandled social grenades. Any full-bore offensive against systems of oppression, especially one as handsomely helmed and brilliantly performed as The Wonder, has undeniable value. Yet I can't shake the feeling that Donaghue, for all the darkness of her narratives, is mainly interested in the fairy-tale ending. 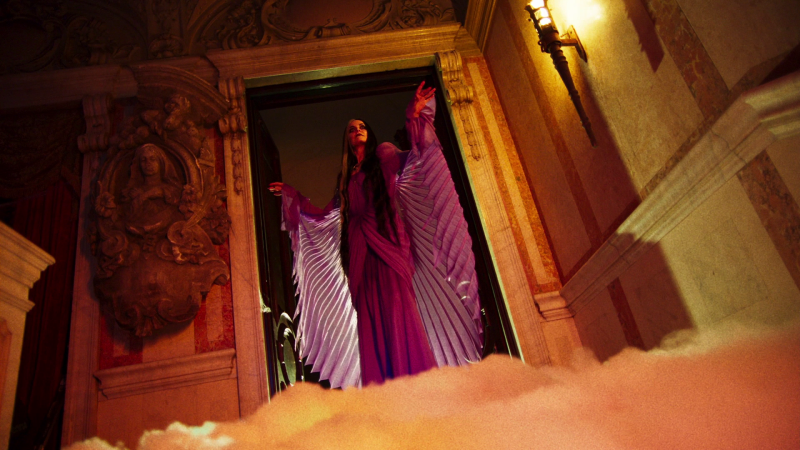 by Walter Chaw Rob Zombie only makes movies about families, and he does it with a wife he loves. It's the kind of relationship John Cassavetes and Gena Rowlands shared: the iconoclastic, combative director and his muse, living examples of a creative partnership built on mutual respect, come hell or high water. I call Rowlands Cassavetes's "muse," though I think closer to the truth is that their movies feel like watching great jazz musicians play off each other. Without exactly equating one of the greatest independent filmmakers of all time with Rob Zombie, I think Zombie and Sheri Moon Zombie go to some interesting places together they couldn't get to on their own. I can't claim Zombie's for everyone--hell, Cassavetes ain't for everyone, either--but he works on a specific wavelength where if you're hip to it, if you fall into his groove, for his part he never loses the beat. I didn't get it when I first saw House of 1000 Corpses, but from a second viewing of The Devil's Rejects on, I've been ride or die with Zombie. Unlike most, when it was announced he was tabbed to do a reboot of "The Munsters" (which has turned out to be a prequel to the TV series), I was not only not surprised, given his penchant for family stories--I was excited. I wish it were better.

by Walter Chaw At the end of the note that opens Miriam Toews's novel Women Talking, she says that her book is "both a reaction through fiction to these true-life events, and an act of female imagination." Sarah Polley's adaptation begins with the same declaration of "female imagination," and it occurred to me finally, after sitting on the film for a couple of weeks before writing on it (and after reading Towes's book for the first time to try to better understand my disquiet), that my problem with Women Talking is mainly one of my own expectations of the text. I expected this to be a galvanizing bit of agitprop: a rallying cry and a soapbox. It was an expectation exacerbated by Polley's intro to the film at its world premiere in Telluride, where she introduced an "army of women" that included 11 cast members and one producer, Dede Gardner, who is the president of Plan B Entertainment, the production company founded by Brad Pitt. Though Pitt, too, is a producer on Women Talking, he was for obvious reasons absent on that stage--the same reasons, I reckon, that led to male characters in the Toews source being pared away for the film. But while it has powerful moments, as any piece of art inspired by a real-life case of mass rape (including the rape of children as young as three) in a closed-off religious cult (aren't they all?) would have powerful moments, Women Talking is a romantic fantasy told from the perspective of a dreamy male narrator who has a doomed crush on a perfect projection of gauzy, unearthly femininity. It's mostly my fault for assuming it was something else.

by Angelo Muredda The Spring 2020 lockdown gets pulled out of the cultural memory hole in Sick, where vulgar auteurism favourite John Hyams proves himself a capable new aesthetic partner for screenwriter Kevin Williamson's aging Gen-X insights. A satisfyingly nasty and well-executed cold open sets the scene, updating Scream's terrorism-by-home phone set-piece with a killer who's a passive-aggressive texter and summarily dispatching a reluctant young mask-wearer who comes home empty-handed during the great toilet paper drought of April 2020. From there, it's off to a remote country house with actual protagonists Parker (Gideon Adlon) and Miri (Beth Million), the latter more COVID-conscious than her reluctantly isolated social-butterfly friend. Their plan to ride out quarantine in relative seclusion soon falters when Parker's sometimes-boyfriend shows up, paving the way for a worse door-crasher: the athletic, text-happy, black-clad killer from the opening sequence.